Tapbots, the makers of popular third-party Twitter app Tweetbot that was recently killed by Twitter’s API changes, is releasing its next new product. Hoping to fill the void that Tweetbot leaves behind, the company is now making its anticipated Mastodon client app Ivory available on the App Store as an Early Access release.

The “Early Access” label is a subtitle that Tapbots put on its release to indicate there will still be features missing as it debuts, the company told us. However, by launching publically on the App Store, Tapbots is able to put Ivory into more people’s hands after filling up the limited number of TestFlight slots it had for its test version.

Tapbots founder Paul Haddad told TechCrunch that Ivory’s App Store release was approved just yesterday, but the company had a few technical issues to address around subscriptions before publicizing the launch.

For longtime Tweetbot users, Ivory will offer a familiar experience. But instead of serving as a client for Twitter’s network, the company has now embraced the promising open source platform Mastodon. Though not quite as simple to use or understand as Twitter, Mastodon has gained traction in the months following Elon Musk’s acquisition of Twitter.

As Twitter’s new owner implemented controversial changes and the site’s performance degraded at times, some people had begun looking for a new home to post short updates, as they did on Twitter. That led to a flurry of interest in new apps and other Twitter alternatives, like Mastodon. As of December, Mastodon had grown to 2.5 million monthly active users across some 8,600 different servers or, in Mastodon lingo, “instances.”

However, some Mastodon newcomers didn’t like the official native mobile app — especially after using the faster, more polished Twitter native mobile app or those from third parties, like Tweetbot. That helped attract interest in the up-and-coming apps like Ivory and others being built by former Twitter third-party app developers, including Mammoth.

At launch, it sports dozens of features, ranging from support for baseline functionality to clever bells and whistles, like being able to theme the app or change its icon.

The app supports multiple accounts, and lets you view your local and federated timelines, trending posts, post statistics, notifications and more. It also enables Mastodon-specific options that weren’t available on Twitter — like the ability to add content warnings to posts — as well as more common features, like the ability to post GIFs and polls. 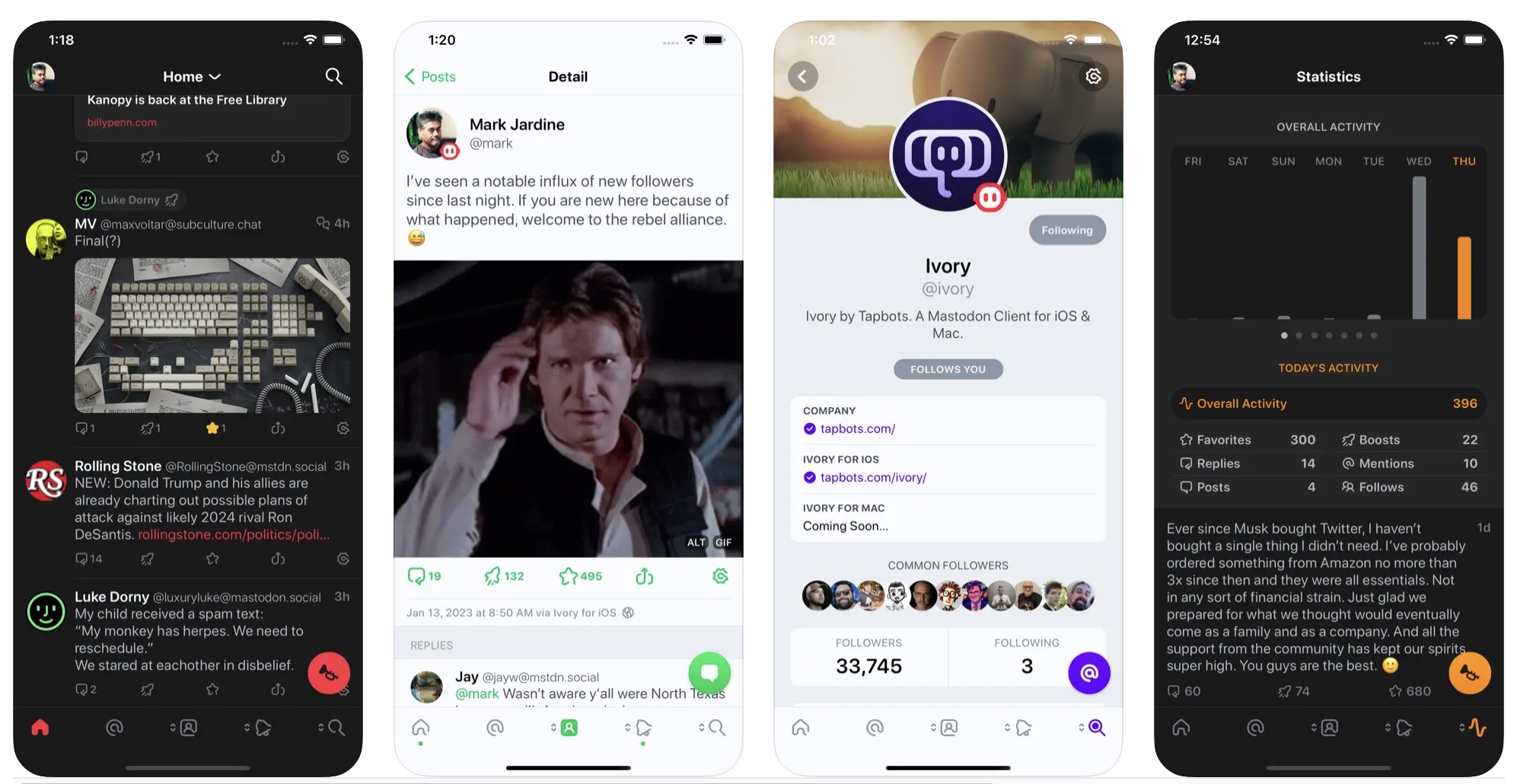 There are other thoughtful touches designed to appeal to power users, too, like hashtag tracking, mute filters with regex support and timeline filters that let you show or hide posts that meet certain criteria you set. This could appeal to Mastodon’s older users, as well, who may want to mute and avoid some of the posts shared by Mastodon newcomers who are bringing Twitter’s culture to the platform, leading to unwanted posts without content warnings in their timelines.

Ivory also allows users to personalize the app in other ways. In addition to the filters, themes and icon choices, users can configure the navigation buttons at the bottom of the screen to show them what they want to see, by pressing down on buttons to switch between tabs for different areas of the app like bookmarks, favorites, statistics, your profile, notifications, lists, search and more.

For a debut release, Ivory is already a fairly robust client. However, the company says it has much more to still add to the app, including things like tools for editing your profile or editing your posts (take that, Edit Tweet button!), as well as others for reading the alt/description text for media, improved hashtags, support for custom instance emoji, an improved notifications tab with better filtering, improved nav bar and a feature to suppress duplicate posts.

The app will generate revenue, as Tweetbot did, by way of in-app subscriptions. The App Store lists these as costing either $1.99 per month or $14.99 per year. A “Premier” subscription is also available for $24.99 per year. The latter includes all the features in the Pro subscription, and will later include a few extras, the company says. Haddad says the Premier tier was added mainly because people were asking to pay more money to help the company out, but it plans to include a few perks for those people in the future, including possibly, things like extra icons or wallpapers.

These subscriptions are available in the Ivory app at present, and enable some of the power user features like configuring which notifications you want to receive, among other things. Users can also “demo” the app for free without committing to a subscription.

As Tweetbot’s revenue was cut to zero by Twitter’s API changes, apps like Ivory only have a future if consumers are willing to adopt Mastodon and subscribe to alternative clients. And because Mastodon has a much smaller global user base to draw from, compared with Twitter, Ivory’s revenue potential has a smaller ceiling than the company’s Tweetbot app once did. (If you’re feeling nostalgic, visit its memorial page.)

We have been testing Ivory for a few weeks through its TestFlight version and found that it offered a performant and rich user Mastodon experience that’s in many ways superior to the official app, making it easily one of the top choices for using Mastodon on iOS devices, even in its early days.