I have recently been a part of a few M&A processes at companies I work closely with. These transactions involved private companies selling to larger companies (public and private) and were all-cash transactions.

This inspired me to chronicle best practices and considerations for founders who are selling their company. In doing so, I hope that founders take away at least one useful insight.

I am grateful and fortunate that I could solicit input on this article from several people, including Theresia Gouw and Mark Kraynak; a few of my partners at Acrew; Ed Zimmerman and Meredith Beuchaw from the law firm Lowenstein; Shan Aggarwal, VP of corporate development, Coinbase; and Art Levy, chief strategy officer at Brex. I hope to also hear from more founders as they read through this.

M&A can be a great outcome for all parties, especially for startup founders and their team. Founders may have conflicting emotions when thinking about selling their company. That is perfectly understandable; in the beginning, many founders hope to build an enduring company.

Not all companies are best positioned to go it alone, and that’s okay.

However, it’s important to acknowledge that there are plenty of good reasons to sell: You can join a “larger rocketship” where 1+1=3; there could be a strong match with an acquirer; burn-out in the startup team; the team or investor wants liquidity; and so on. Further, myriad long-term, standalone companies have been founded by founders who sold or exited their prior companies.

During downturns, think of M&A as a game of musical chairs. The companies that test the market earlier in the cycle (before things have gotten particularly bleak) tend to see better outcomes.

In markets where incumbents are playing catch-up, there is a window when a few companies will get bought. By the time those deals settle, the rest will likely decide to build instead of buying.

Below, I’ve outlined the key steps of a M&A process.

From a timing point of view, founders should plan to conclude a sale in up to nine months. That isn’t to say it can’t happen sooner, but we would counsel that amount of cash buffer. This may require companies to raise bridge financing and/or consider reducing burn. As one of my partners counseled, “Every week you wait to cut spend makes the cuts you will need hurt that much more.” 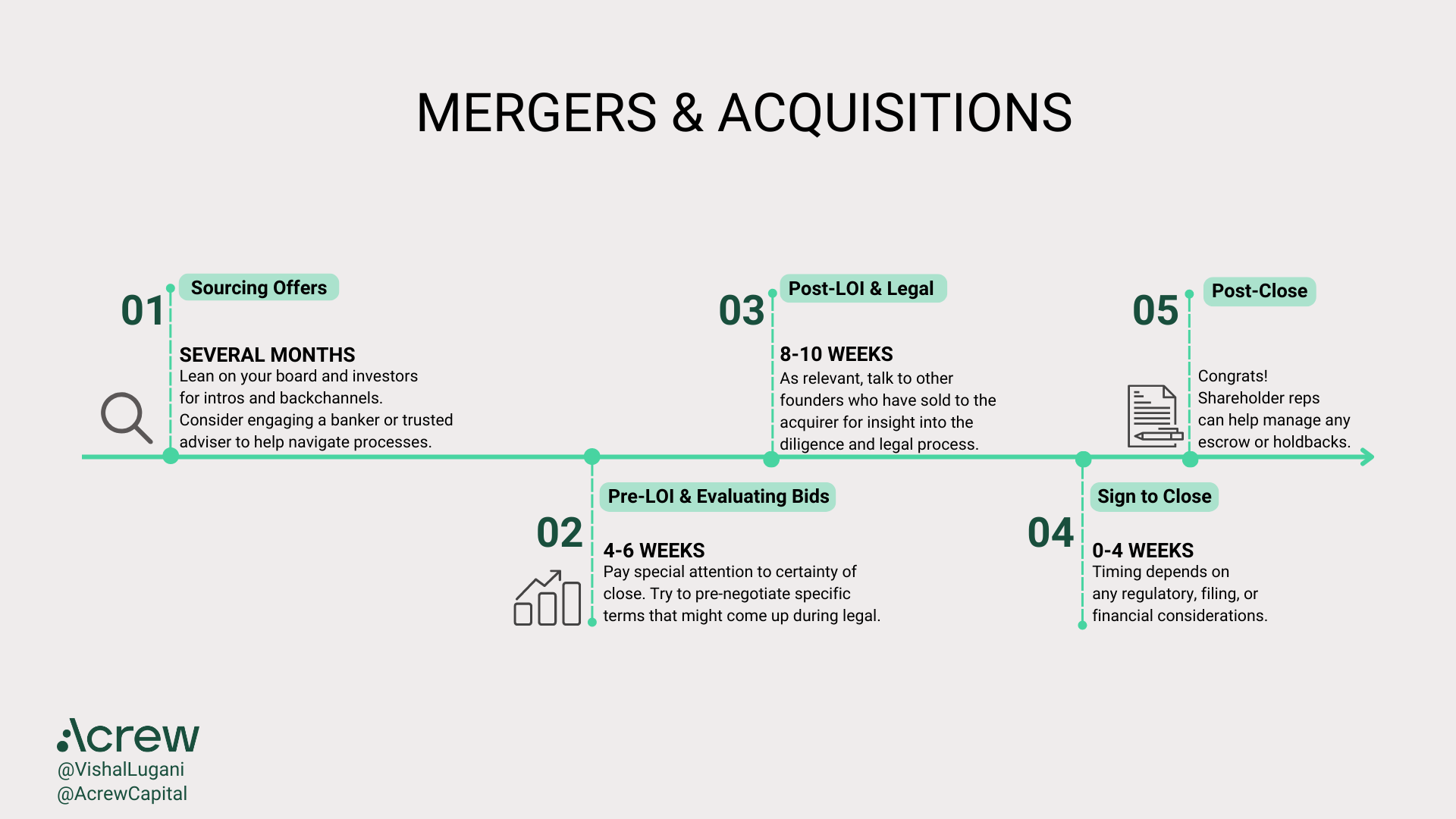