Update! Well, it took a couple of days, but Elon Spoke after the poll results. Twitter’s owner said he would step down as head of the company… but — surprise! — with no real timeline, no endorsement of the role, and a caveat, offhandedly adding he would still run the core parts of his newest technology plaything: “I will resign as CEO as soon as I find someone foolish enough to take the job! After that, I will just run the software & servers teams.” Oh, and in case you forgot: Musk flip-flops more than a dying fish, so all of the above may never happen. Or it might. Meanwhile, Tesla’s stock continues to drop as weary and wary investors continue to question his moves. Seriously, good luck to whoever does take a job ‘managing’ Elon Musk.

Elon Musk’s reign over Twitter — marked by chaos from his snap decisions, massive layoffs and endless product u-turns — could be taking its most dramatic turn yet, if Twitter users have their say.

A poll put up by Musk on Sunday asking if he should step down as head of the company closed today with users voting resoundingly in favor of him leaving. Nearly 17.4 million people responded over 12 hours, and 57.5% of them voted “Yes” versus 42.5% of them voting “No” — a margin of 15% supporting him leaving. “I will abide by the results of this poll,” Musk noted in the poll. 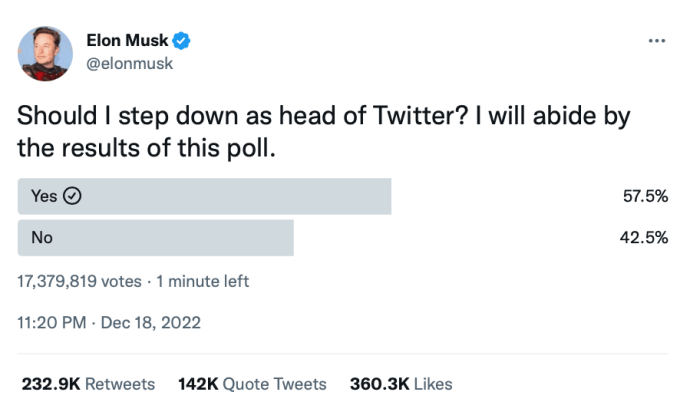 We’re going to detail all the reasons here why this shouldn’t be taken too strictly as a directive to Elon. But first, the very distinct takeaways. People are still on Twitter; people care what happens; and those online — in the last 12 hours at least — do not, in the majority, really want more of Elon’s antics. That there is a way of giving people a voice and that people speak out is important in and of itself.

But now for the main reason why you should not hold your breath or be too upset when nothing happens: Elon, at the end of the day, will do what he wants.

No, he’s not exactly good for his word, as we’ve seen many times over. (Just ask Tesla shareholders how his promises have worked out.) And no, we have no way of verifying poll results. And, yes, Musk could just decide to redo the poll until he gets whatever result he wants — whatever result he wants today, that is. Musk’s only predictable quality seems to be that he’s unpredictable.

And because of all of the above, do we really know what his actual motive was in putting up the poll?

Is he: Actually giving himself an exit option? Feeding potential investors hypothetical alternatives? Scrappily generating more rubbernecking traffic? The last one is a distinct possibility, given how Twitter — depleted of more than half the staff it had before Musk took over — has pretty much dropped the ball on all the set pieces it’s been building up over the years to generate audience and revenue.

Maybe he’ll poll that question next!

Musk has been in Qatar (errrr I think I can say that here on TC and not get banned on Twitter, yes?), ostensibly to watch the World Cup (but boy are there a lot of wealthy folks there looking to do ever more investing in the West). His tweets from the game have been some of the most watched on Twitter pertaining to the final yesterday.

Sure, his one-night takeover of the sports curation beat has been great, but at some point someone has to clean up the mess in the stadium.