The Linux Foundation has partnered with some of the world’s biggest technology companies to develop interoperable and open map data, in what is a clear move to counter Google’s dominance in the mapping realm.

The Overture Maps Foundation, as the new effort is called, is officially hosted by the Linux Foundation, but the program is driven by Amazon Web Services (AWS), Facebook’s parent company Meta, Microsoft and Dutch mapping company TomTom.

The ultimate mission of the Overture Maps Foundation to power new map products through openly available datasets that can be used and reused across applications and businesses, with each member throwing their own data and resources into the mix.

“Mapping the physical environment and every community in the world, even as they grow and change, is a massively complex challenge that no one organization can manage,” noted the Linux Foundation’s executive director Jim Zemlin in a press release. “Industry needs to come together to do this for the benefit of all.”

Map and location data plays such a fundamental role across society today, powering everything from IoT (Internet of Things) devices and self-driving cars, to logistics and big data visualization tools. Having all that data under the auspices of just one or two mega-firms can be hugely restrictive in terms of what companies can do with the data and what features they have at their disposal, not to mention the costs involved in licensing it.

Spatial mapping will also be vital to emerging technologies such as those required for the Metaverse, which Meta is heavily invested in.

“Immersive experiences, which understand and blend into your physical environment, are critical to the embodied internet of the future,” added Jan Erik Solem, engineering director for Maps at Meta. “By delivering interoperable open map data, Overture provides the foundation for an open metaverse built by creators, developers, and businesses alike.”

Google is a notable omission from the Overture Maps Foundation’s founding members. Indeed, that such big names and rivals from the technology sphere are coming together in partnership is probably testament to the stranglehold Google has on the world of mapping, a position it has slowly garnered since launching its Android mobile operating system nearly fifteen years ago.

Moreover, with the iPhone arriving around the same time, a combination that brought maps and navigation into the pockets of millions of people globally, this had a monumental impact on incumbents such as TomTom, which had built a substantial business off the back of physical navigation devices plastered to car windshields.

This graph shows how TomTom’s shares plummeted with the advent of the modern smartphone era. 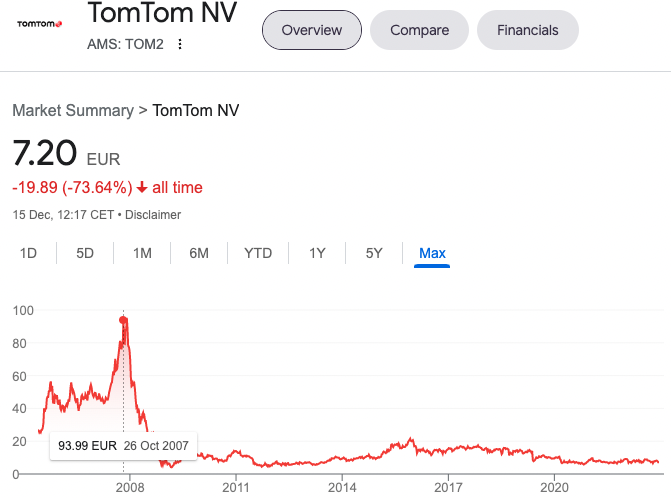 In the intervening years, TomTom has tried to evolve, striking map and data partnerships with the likes of Uber and Microsoft, while it has also targeted developers with SDKs and hit the acquisition trail to bolster its autonomous vehicle ambitions. But the fact remains, Google and its mapping empire still rule the roost for the most part, something that this new collaboration will go some way toward addressing.

“Collaborative mapmaking is central to TomTom’s strategy — the Overture Maps Foundation provides the framework to accelerate our goals,” TomTom CEO Harold Goddijn noted in a press release. “TomTom’s Maps Platform will leverage the combination of the Overture base map, a broad range of other data, and TomTom’s proprietary data in a continuously integrated and quality-controlled product that serves a broad range of use cases, including the most demanding applications like advanced navigation, search, and automated driving.”

The emergence of this new foundation jibes with trends elsewhere across the technology spectrum, with a growing push toward decentralized and interoperable social networks driven by regulatory and societal pressures. Elsewhere, the Linux Foundation also recently announced the OpenWallet Foundation to develop interoperable digital wallets, pushing back against the closed payment ecosystems fostered by tech juggernauts including Google and Apple.

Today’s announcement very much fits into that broader trend.

The founding companies are planning to engage in collaborative map-building programs, meshing data from myriad open data sources and knocking it into a format that’s consistent, standardized, and fit for use in production systems and applications. This will include channeling data from long-established projects such as OpenStreetMap, in addition to open data provided by municipalities.

While there are only four member companies at launch, there are plans to expand things in the future to include any company with a direct vested interest in open map data.

For now, the Overture Maps Foundation said that it’s working toward releasing its first datasets in the first half of 2023, and will include “basic” layers such as roads, buildings, and administrative information. Over time, this will expand to include more places, routing and navigation, and 3D building data.