For some reason, Niantic added a feature to Pokémon Go in which sometimes Pokémon can be HUGE and sometimes they’re tiny. This feels like a relatively useless feature that doesn’t really change gameplay at all, but I mean, sure, I will take a tiny Poochyena, please and thank you!

Rolling out now, the Pokémon Poochyena, Mightyena and Mawile can appear in size XXS or XXL. Why those three Pokémon only? I don’t know, ask Professor Willow. In reality, it is probably to create a sense of excitement that they can draw out as they slowly roll out, uh, small Pikachu and big Eevee. Or, as they appear in-game, Pokémon that’s far from camera and Pokémon that’s close to camera. 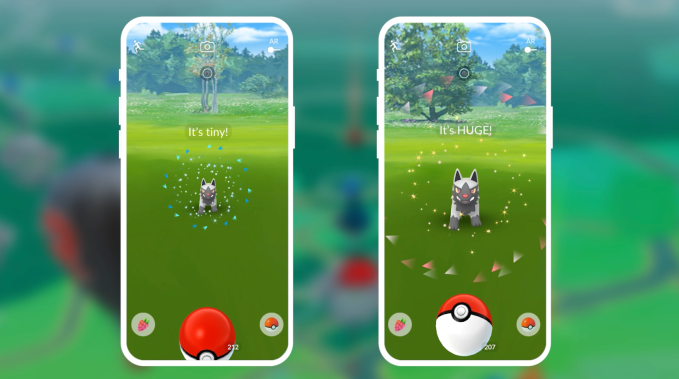 We’ve already had sizes of Pokémon since the game first came out in 2016 — usually this was used for horrible Reddit jokes in which people would nickname their Pokémon after certain body parts, then screenshot the appraisal screen, in which the Professor would say, “Your [body part] is huge!” if the Pokémon was of a larger size. You know what I mean. You can’t nickname Pokémon with that language anymore, but as a consolation, now there is a feature in the Pokédex that shows you the size ranges of Pokémon that you have caught. When you catch a new smallest or largest Pokémon for each species in your Pokédex, you will get a fun little pop-up congratulating you.

You’ll know if you’ve come across a superbig or supersmall guy in the wild because, uh, their sizes will be different. And there will be little animations that tell you this. Personally, I think these animations are a bit similar to those that appear when you find a shiny Pokémon in the wild, and a large Mawile simply is not as exciting as a shiny one, but hey, I didn’t design the game. If I did, I would have a shiny Mawile.

The company behind Pokémon GO, Niantic lays off 8% of staff and cancels 4 projects