Quick commerce grocery delivery companies are having a moment, and not necessarily a good one.

An industry that was on fire at the beginning of the global pandemic, mainly due to people forgoing IRL grocery shopping, has slowed as shoppers returned to brick-and-mortar stores.

As a result, several so-called q-commerce companies pumped the brakes. Getir said it would acquire competitor Gorillas and plans to inject $100 million into the company to help it out. In May, Getir announced layoffs. Gopuff announced plans to pull back in Europe, while JOKR left the U.S. and abandoned two Latin American markets as well. Perhaps most notably, Instacart paused its IPO.

While these kinds of announcements became more frequent this year, Duffl co-founder and CEO David Lin believes his quick commerce startup is an outlier in the sector. 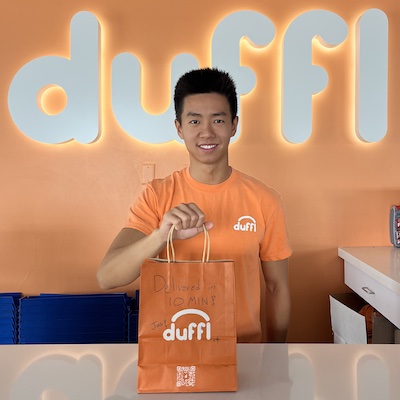 How, you ask? By tapping into a model that focuses on 10-minute delivery of higher-margin goods, like snacks and convenience items, via e-scooter in more dense areas, enabling college students, called “Admirals,” to lead and run their own seven-figure businesses on campus.

That strategy has paid off so far: Duffl went through Y Combinator in Winter 2020 and has since raised over $13 million, including a $12 million Series A, led by Volition Capital in October 2021.

Duffl started off at UCLA, where Lin was an undergrad, and is now on the campuses of Arizona State University, University of Arizona and University of Texas, some of which are already cash positive. Admirals and their employees fielded 35,000 orders in September from 11,000 students across those campuses and managed 69% growth in new customers from referrals during the same month, Lin said.

He spoke with TechCrunch about how he’s made quick commerce work for Duffl while others struggled. The following has been lightly edited for length and clarity.

We’ve seen some quick commerce companies struggle lately. What are the challenges to this market and how have some companies gotten it wrong?

It’s certainly a difficult time for everyone, but especially players in this space, and in a down market, where you’re fundamentally dealing with low-gross-margin products, like groceries, produce and perishables. In addition, dealing with such a small time frame for delivery, you run into a lot of labor-related expenses, like transport, pick and pack costs, insurance and real estate overhead, that are very difficult to scale.

It sounds like it has much to do with the way a delivery company sets up its business model, correct?

Certainly. I would say that history doesn’t necessarily repeat itself, but it does rhyme. I started doing this in 2018, and it was quite interesting to watch the evolution through the pandemic.