Startups across Europe are on track to raise $85 billion in funding this year — a drop of $15 billion on 2021 when funding passed $100 billion, according to a new report published today. The figures come from London VC firm Atomico’s annual State of European Tech, which has become a bellwether for the tech industry in the region, and they underscore the pressure bearing down on it as the region grapples with an ongoing war in Ukraine, a sagging economy and specifically tech industry, and a population wobbling to get back on its feet and productive again after two years of the COVID-19 pandemic.

Altogether, the European tech industry has lost about $400 billion in value, Atomico said: It is now valued at $2.7 trillion. And in keeping with those losses, it also notes that tech layoffs in the region will shape up to be about 14,000 for the year — a giant figure, but still only 7% of the total number of layoffs globally, which number about 200,000.

The report encompasses a survey of VCs and founders, as well as research from third-party firms like Dealroom.

The total-raised figure is not entirely a grim message when put into context. Atomico noted that funding for the year actually started out looking like it would exceed 2021 levels. Then in July, activity dropped off a cliff and hasn’t come back.

That’s not a great sign going into 2023, but it also seems to indicate that 2021’s $100 billion raised was also an outlier year. The total funding raised in 2020, for example (a year when all kinds of activity ground to a halt with the start of the pandemic), was just $39 billion. 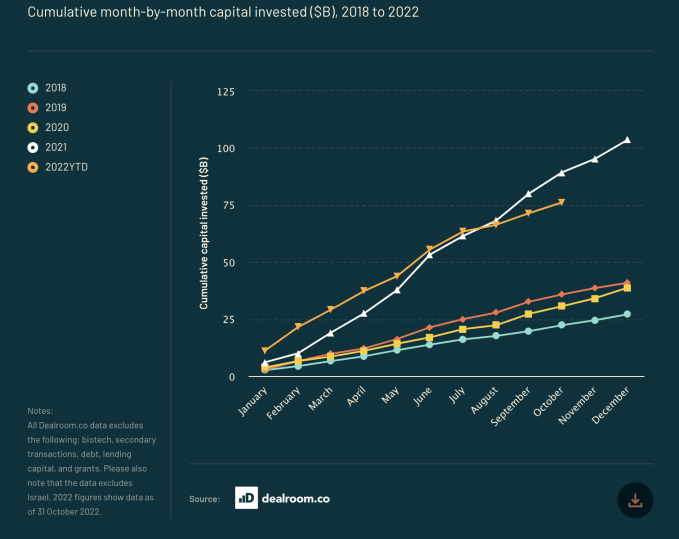 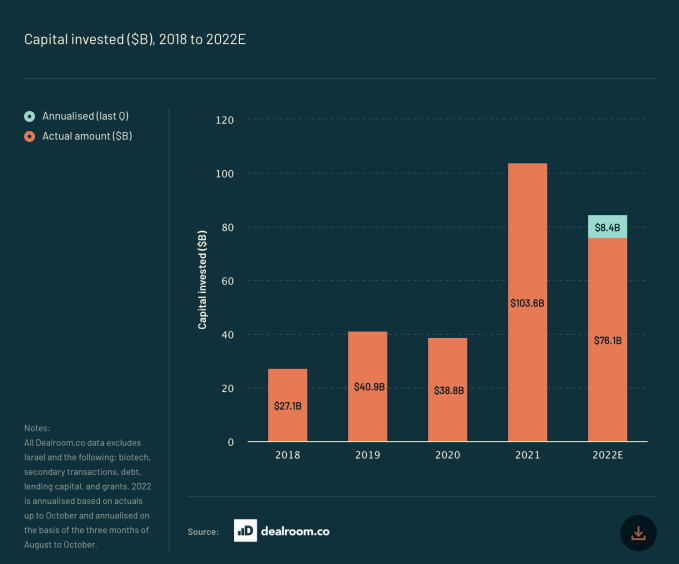 Why the drop? Interestingly, those surveyed said that while the economy — specifically higher interest rates and an inflation risk — was the biggest chilling factor impacting Europe’s tech industry, they believed that the second-most important factor was not a macroeconomic factor but a microeconomic one: an unfriendly regulatory environment was holding back entrepreneurs. The performance of public market companies and general public sentiment around tech, and the geopolitical situation, respectively rounded out third and fourth place.

Indeed, Atomico’s other big conclusions confirm what many of us have been seeing play out on a daily, weekly and monthly basis.

IPO markets, Atomico notes, are totally shut down. There were just three IPOs this year in the region, compared to a startling 86 the year prior, a drop of 30%.

And the number of “unicorns” being produced — that is, companies reaching a valuation of more than $1 billion — also dropped. There were 31 of these this year, versus 105 in 2021. But again, as with funding, this appears to be indicating last year was an outlier: 2020 had 25, and 2019 had 35 companies with $1 billion or higher valuations.

Similarly, it found that funding rounds themselves came down in size as the year progressed.

Again, as with overall funding, the first half of the year broke records, with 133 rounds of equity funding at $100 million or more (not including debt rounds or secondaries), which was more than 2019 and 2020 combined. It may have been, however, that some founders were looking to make hay while the sun was still shining: By the second half of the year, those big deals dropped, and there were a “mere” 37 rounds of that size. Possibly in line with that, big-pocketed U.S. investors are also making fewer moves into the region — their participation was down by 22% on 2021.

Atomico doesn’t drill down into specific investors and investments, but it’s also notable that some of the most prolific investors in European tech saw some huge mark-downs and specific crashes and are reassessing how they are approaching the industry as a result. Those include SoftBank, which invested lavishly out of its well-capitalized, London-based Vision Funds for several years, but last month delivered its latest mark-down blow: $7.2 billion in write-downs for it alone; along with that the firm has seen a major upheaval in its talent and management team. Tiger Global, which is also losing its star partner, has lost tens of billions on its tech investments. Others have been hit hard by the crypto crash. And so on and so forth.

But notably, it’s not just those on the growth end of the spectrum that are feeling the pinch. As we’ve noted before, larger businesses might have seen some of the first impacts, but the reverberations trickle down the pyramid to medium-sized and smaller startups, too; “82% of founder respondents to the survey believe it is now harder to raise venture capital than it was 12 months ago,” the report notes.

And in tougher times, a push for diversity has been even more overlooked than before. Atomico noted that 87% of all VC funding in Europe “is still raised by men-only founding teams.”

Conversely, the proportion of funding raised by women-only teams has dropped from 3% to 1% since 2018, as the number of deals has stayed level at 5-6% but money going to them has not grown. “Even when women-only teams successfully raise a round, they are likely to receive less — and this pattern is trending in the wrong direction,” Atomico notes, and you can see below how badly women are represented at the higher end of the funding spectrum in actual terms, even as they grew slightly in some brackets: 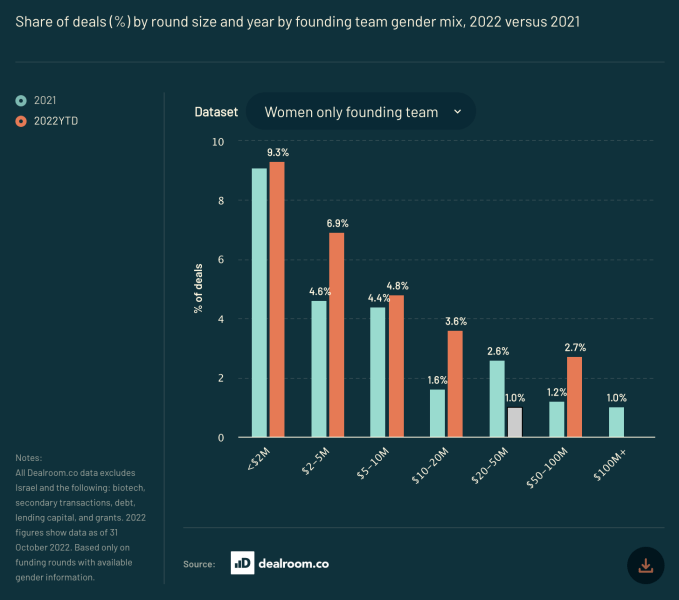 Ethnic minority founders, meanwhile, were nearly unchartable: Just 1.4% of funding by deal number count went to all-minority founding groups; and just 0.7% went to them by value. (Atomico does not detail other categories in DEI.) The message is clear that there is just a lot of work to do here to improve the ratios.

Unsurprisingly, all of the bad signs add up to a massive devaluation. The wave of mark-downs of private companies and market cap lost for public companies has worked out to a loss of about $400 billion for tech as a whole, Atomico notes. It’s now collectively valued at $2.7 trillion, down from $3.1 trillion at the end of 2021.

One silver lining of the trickle-down effect on tech — where the biggest companies (those that are publicly traded, or very mature and privately held) might be feeling the biggest pinch — is that early-stage still is doing very well overall in Europe, relatively speaking. Younger startups in the region account for a whopping 51% of investment going into “purpose-driven” tech companies. (Note: These are startups that either are mixing science with tech, or bringing tech to bear to fix bigger issues in the world such as climate change — not the same as investment going into all early-stage startups.)

And just as we have been charting a number of venture funds in the region raising in excess of $1 billion this year, Atomico connects the dots on this to note that there is indeed a lot of “dry powder” out there — funds ready to be invested when the right opportunities arise.

At the end of 2021 (the last full period available), InvestEurope estimated that there was some $84 billion of uninvested funds across Europe — coincidentally not far off from the total amount startups will have raised this year. That $84 billion includes both VC and private equity. Given the amount of fundraising collectively across the industry this year, and the subsequent drop-off in investing, especially in the latter half of this year, Atomico believes dry powder reserves could be even higher when all is tallied, although right now it appears to be half as much.

“The technology ecosystem as we know it is barely twenty years old and in that time we’ve matured at an incredible rate. Real success for the sector is about talent, innovation and long-term company building,” writes Tom Wehmeier, Atomico’s partner and head of insights, and co-author of the report. “The crucial pieces of this puzzle remain in place, with $44 billion in European venture capital funds ready to be invested in the right opportunities. In terms of the underlying strength of our ecosystem, far less has changed than we think.”