Software-as-a-service (SaaS) subscriptions have become a fixture of the modern enterprise; organizations with more than 1,000 employees use over 150 SaaS apps on average, according to BetterCloud. Fully managed apps are often a lighter load on IT teams because they’re entirely cloud-based. But increasingly, organizations are under pressure to reduce their SaaS budgets as inflation and related economic stressors impact the bottom line.

According to a recent survey from Workato, 57% of IT teams have received directives from the C-Suite to reduce their overall SaaS spend. A separate report from from Vertice, a SaaS purchasing and spend management platform, found that SaaS pricing is growing 4x faster than market inflation; that customers are spending 53% more on licensing than they were five years ago; and that $1 in every $8 that organizations spend is now dedicated to SaaS. (Take those numbers with a grain of salt, of course; Vertice has a product to sell.)

Given the widespread desire among the enterprise at present to cut costs just about anywhere, particularly in software spend, it’s perhaps no surprise that venture firms have been won over by startups like Zylo, whose platform finds and manages SaaS spend for mainly corporate customers. Zylo today announced that it raised $31.5 million in Series C funding led by Baird Capital’s Venture Team with participation from Spring Lake Equity Partners, Bessemer Venture Partners, Menlo Ventures, High Alpha and Coupa, an infusion that brings the startup’s total raised to date to $64 million.

In an interview with TechCrunch via email, CEO Eric Christopher said that the bulk of the new capital will be put toward product development and hiring. Zylo recently beat its previous growth record by close to 30%, he noted, doubling new business year-over-year and adding customers such as Adobe, Atlassian, Coupa, DoorDash, Intuit, Slack, Salesforce and Yahoo! (full disclosure: TechCrunch’s parent company).

“Our investors recognize the significant opportunity in front of us due to companies’ accelerated spending on SaaS subscriptions, costly renewals and lack of visibility across the enterprise,” Christopher said. “It’s the right time to capitalize on these circumstances, given the economic challenges heading into 2023.”

Zylo was incubated at the aforementioned High Alpha, an Indianapolis-based venture studio focused on conceiving enterprise cloud companies, and founded in 2016 by Christopher, Cory Wheeler and Ben Pippenger. Christopher was previously the SVP of sales at social media management platform Sprout Social, while Wheeler was the director of procurement at Salesforce and Pippenger was the senior director of product management at Salesforce.

Fast forward to today, Zylo provides a platform that taps AI to analyze SaaS spend and usage in real time. It creates a system of record for SaaS in an organization, showing how a company’s portfolio, licenses and pricing stack up against industry benchmarks. 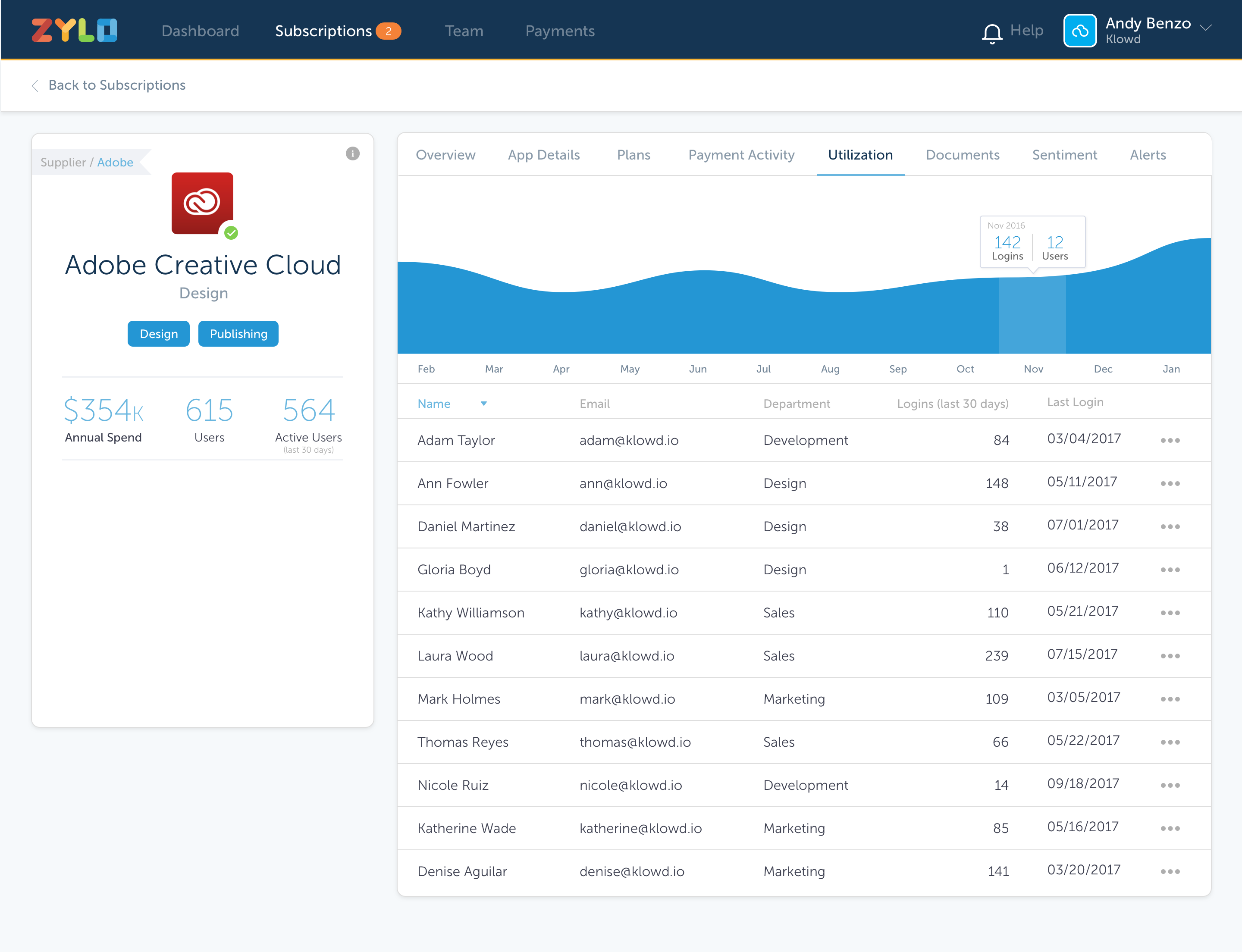 Zylo certainly isn’t the only company doing this. Aside from Vertice, startups like Beamy, Pleo, Unito and Spendflo offer software for SaaS spend tracking. (Verified Market Research predicts that the SaaS management market will be worth $716.52 billion by 2028.) Christopher doesn’t deny that there’s a overlap among SaaS management vendors, but he argues Zylo’s ease of use and comprehensiveness set it apart from the crowd.

“Zylo helps CIOs and CFOs collaboratively manage the strategy around the most important and most distributed category of spend: subscription software,” he added. “Zylo helps IT and finance leaders reign in the chaos of unknown and unmanaged software with comprehensive and ongoing discovery, followed by operationalizing the most important business process related to SaaS: renewal management. We drive cost-avoidance and savings by lowering current and future opex while improving employees’ experience with the SaaS applications they depend on.”

Christopher wouldn’t reveal exact revenue figures. But he said that Zylo — which has a full-time team of around 125 people, the majority of whom are based in Indianapolis — now has over 30 million SaaS licenses and $30 billion in SaaS spend under management.

The plan going forward is to invest primarily in talent and customer acquisition, Christopher said. He expects the down economy will be a tailwind as companies face expensive renewals after prioritizing new digital tools to keep their businesses running when much of the world was shut down.

“With software budgets spread across so many departments, it’s not unusual to find that more than one part of the enterprise is paying for the same software as another with limited discounts — or not discounted at all,” Christopher said. “That’s why SaaS licensing is ripe for optimization. Instead of looking to make cuts in human capital, companies should first take a hard look at their SaaS spend, which is often redundant.”