Twitter is no longer enforcing its policy against misleading information about COVID-19, per an update posted to an official company blog page.

Reuters spotted the change earlier — which said the change was effective as of last Wednesday.

“Effective November 23, 2022, Twitter is no longer enforcing the COVID-19 misleading information policy,” the social media company writes in a brief gray-on-gray note on a company web page that’s still emblazoned with the title: “Coronavirus: Staying safe and informed on Twitter.”

Under its prior COVID-19 misinformation policy, the company had said it would remove “demonstrably false or potentially misleading content that has the highest risk of causing harm.” 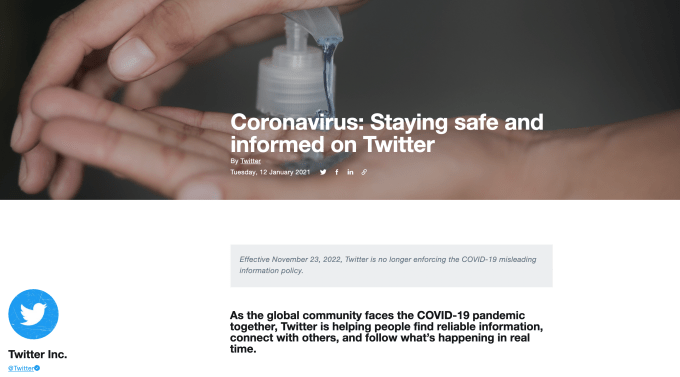 Since billionaire Tesla owner Elon Musk took over the company last month, on closing his $44 billion takeover and drastically slashing headcount, Twitter has stopped responding to press requests — and appears to have entirely shuttered its comms function — leaving Musk’s own tweets or posts like this one to its company blog as the only official outlet for confirming what it’s doing.

While it’s not clear why Twitter has abandoned enforcement of the COVID-19 policy, there was plenty of nuance in how it could be interpreted — as well as a range of enforcement actions that might be applied by Twitter, including putting contextual or warning labels on tweets; reducing visibility and blocking sharing; requiring removal of the tweet; and, for repeat offenders, suspending accounts.

All that enforcement has presumably now ceased under Musk — who, on taking over Twitter at the end of October, tweeted gleefully that “the bird is freed!”

Roughly a month later, Musk’s approach to “liberating” speech on the platform means he’s opened the door to conspiracy nonsense peddlers to amplify dangerous BS about COVID-19 on Twitter. So the backsliding is real.

See, for example, this wild claim tweeted last Friday by mega Musk fanboy Kim Dotcom — whose account has some 1.1 million followers on Twitter — in which he heavily implies that “vaccines now kill more people than COVID.” His “evidence” for that? A graph of “excess deaths” in Europe whose source, EuroMOMO, does not make any reference to causes of excess deaths.

The vaccines now kill more people than Covid? Look at the EU death numbers for the last 5 months:

A report made to Twitter, via its official misinformation reporting channel, of Kim Dotcom’s tweet for spreading COVID-19 misinformation did not yield a response from the company last week. And that inaction is now apparently Twitter policy.

At the time of writing, it was still possible to file a report via official Twitter channels of COVID-19 misinformation — see the below screenshot for its unamended policy statements — but, again, no action will presumably be taken on any such reports… 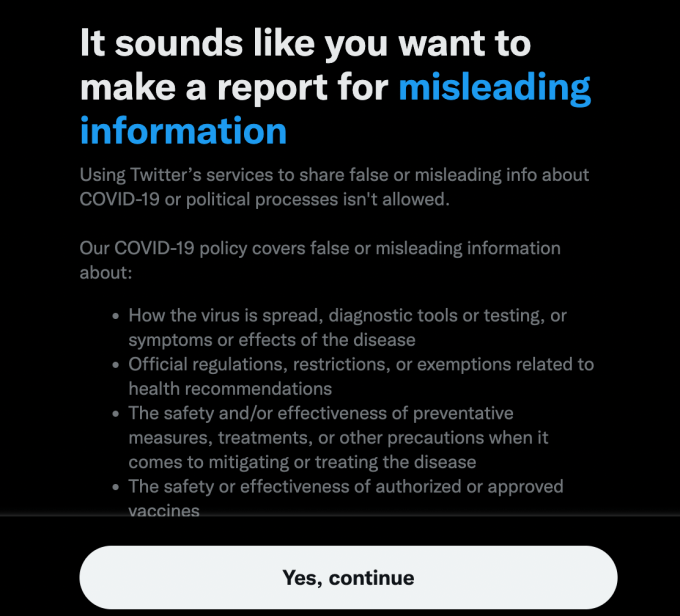 Per details of the framework the company had previously used for evaluating “potentially misleading” claims related to COVID-19 — to determine whether it would or would not take action on a particular tweet — it said for this type of tweet to qualify as a misleading claim, “it must be an assertion of fact (not an opinion), expressed definitively, and intended to influence others’ behavior.”

“Under this policy, we consider claims to be false or misleading if (1) they have been confirmed to be false by subject-matter experts, such as public health authorities; or (2) they include information which is shared in a way that could confuse or deceive people,” it also previously stipulated.

Additionally, Twitter, pre-Musk, conceded that it would be unable to take enforcement action “on every Tweet that contains incomplete or disputed information about COVID-19” — saying it would therefore focus on addressing those claims “that could adversely impact an individual, group, or community”; its greatest concern was stated as being to curb misleading information that could increase the likelihood of exposure to the virus, or that might negatively impact health systems’ capacity to cope, or could lead to discrimination and avoidance of communities and/or places of business based on “perceived affiliation with protected groups.”

Given all that nuance around enforcement, it’s not 100% certain Twitter, pre-Musk, would have taken down Kim Dotcom’s tweet. But it’s 100% guaranteed it won’t do anything about any nonsense tweets about COVID-19 now with Musk in charge.

It’s not clear why the company would want to step back from enforcing a policy that was intended to help protect public health. But Musk has presented himself as a free speech absolutist and continues to actively seek to stoke culture wars on the platform he now owns.

He also recently said he would let scores of previously banned Twitter accounts return to the platform under a general amnesty — so he’s been leaning toward pulling out any stops (though he did apparently draw the line at unbanning InfoWars’ conspiracy hate preacher Alex Jones, implying distaste about lies he’d spread about massacred school children).

What Musk’s (near) free-for-all for disinformation will mean for Twitter users is a continued degradation of the quality of the information they’re being exposed to on the platform.

(See also, his disastrous paid verification scheme — which does not distinguish between people who’ve paid for a ‘Blue Check’ and accounts that got one under the prior actual identity-verification scheme, unless you click through to read some tiny, gray print.)

This free pass for disinformation seems likely to result in Twitter losing more users as more people decide they’ve had enough of being exposed to nonsense and take flight, seeking less toxic online spaces to socialize.

Advertisers are also unlikely to relish their brands being served up alongside misleading tweets about COVID-19.

Another looming question for Musk-Twitter is how regulators will respond to the amped up disinformation risk.

As we’ve written before, under its prior leadership, Twitter had signed itself up to a series of voluntary commitments to fight the spread of disinformation on its platform in the European Union. As far as we’re aware, the company has not revoked its status as a signatory to this EU Code of Practice on Disinformation. But its participation in the initiative appears to exist purely on paper now.

We’ve reached out to the European Commission for a response to Twitter’s policy change on misleading information about COVID-19  and will update this report with any response.

While the EU Code is not legally binding, and breaching it does not imply any sanctions, the Commission — whose initiative this is — is about to take on a major oversight role for large platforms under the incoming Digital Services Act (DSA). It has previously said adherence to the disinformation Code will be factored into its assessment of platforms’ compliance with the legally binding requirements of the DSA. And breaching that regime could incur penalties of up to 6% of global turnover.

We regret this step taken by Twitter, as the COVID-19 pandemic is not over and the experience of the COVID-19 Disinformation Monitoring Programme that ended in May this year has shown that actions put in place by Twitter were effective measures to reduce the spread of disinformation, and also to provide users useful tools to identify and effectively flag dangerous disinformation.
Under the strengthened Code of Practice on Disinformation,Twitter has taken various commitments to be implemented by December 16. We expect them to live up to their commitments, which include reporting obligations on measures they take, adequate financial and human resources as well as appropriate internal processes to ensure the implementation of their commitments. Their first report is expected by January. More generally, we expect that this Code of practice will be a key mitigation measure for disinformation under the Digital Services Act and that very large online platforms and search engines sign up and apply the measures. As such, compliance with the Code of Practice will also be subject to independent audits under the DSA.

Who’ll get the last laugh over Musk toying with Twitter’s veracity?