Aura, a startup founded by early Twitter employees that makes digital frames and photo sharing apps that can also be used to update those frames, has pulled in some funding to expand its business as it closes in on three million users of its app and 1 million frames sold (it’s now at 997,000).

The company has raised $26 million in a mix of debt and equity led by Lago Innovation Fund, money that the company is using to boost manufacturing this quarter and to invest in 2023 plans.

Aura — not to be confused with the meditation and mental wellness app, nor the cybersecurity company, nor the biotech company of the same name — had previously raised around $13 million in equity from investors (per PitchBook) that include Spark Capital, SV Angel, Betaworks and DCVC, as well as a quiet, unreported investment from the Chicago-based Levy Family Office (led by the entrepreneur Larry Levy).

It hasn’t been looking to raise more equity-based funding although CEO and co-founder Abdur Chowdhury said it might do something in the coming year, pending the state of the venture market (it’s been a tough 2021 and investors predict that’s likely to continue for a while, so we shall see).

Meanwhile, the company has been growing at a snappy pace — 100% year on year for at least the last three, with app users going from 1 million in December 2021 to 2 million by September 2022 and on track to hit 3 million in January. Sales of frames have numbered close to 1 million, with the company’s newest design, the $149 Carver, currently its top seller.

Aura’s frames typically have around four people on average connected to them for adding pictures, which creates a network effect of sorts, Chowdhury said eventually some of those users get their own frames and build out additional networks of contributors uploading pictures to the new devices, and so on and so forth. He added that its devices currently are collectively showing some 1 billion pictures to people daily.

Under new owner and CEO Elon Musk, Twitter’s talent pool has been leaking heavily for the last couple of weeks through both layoffs and resignations, leaving a lot of question marks over not just what happens with Twitter itself, but also one another: Among the thousands who have left, who will play a part in whatever might be the next chapter? It’s an open-ended question, one that Chowdhury can provide at least one answer by example. 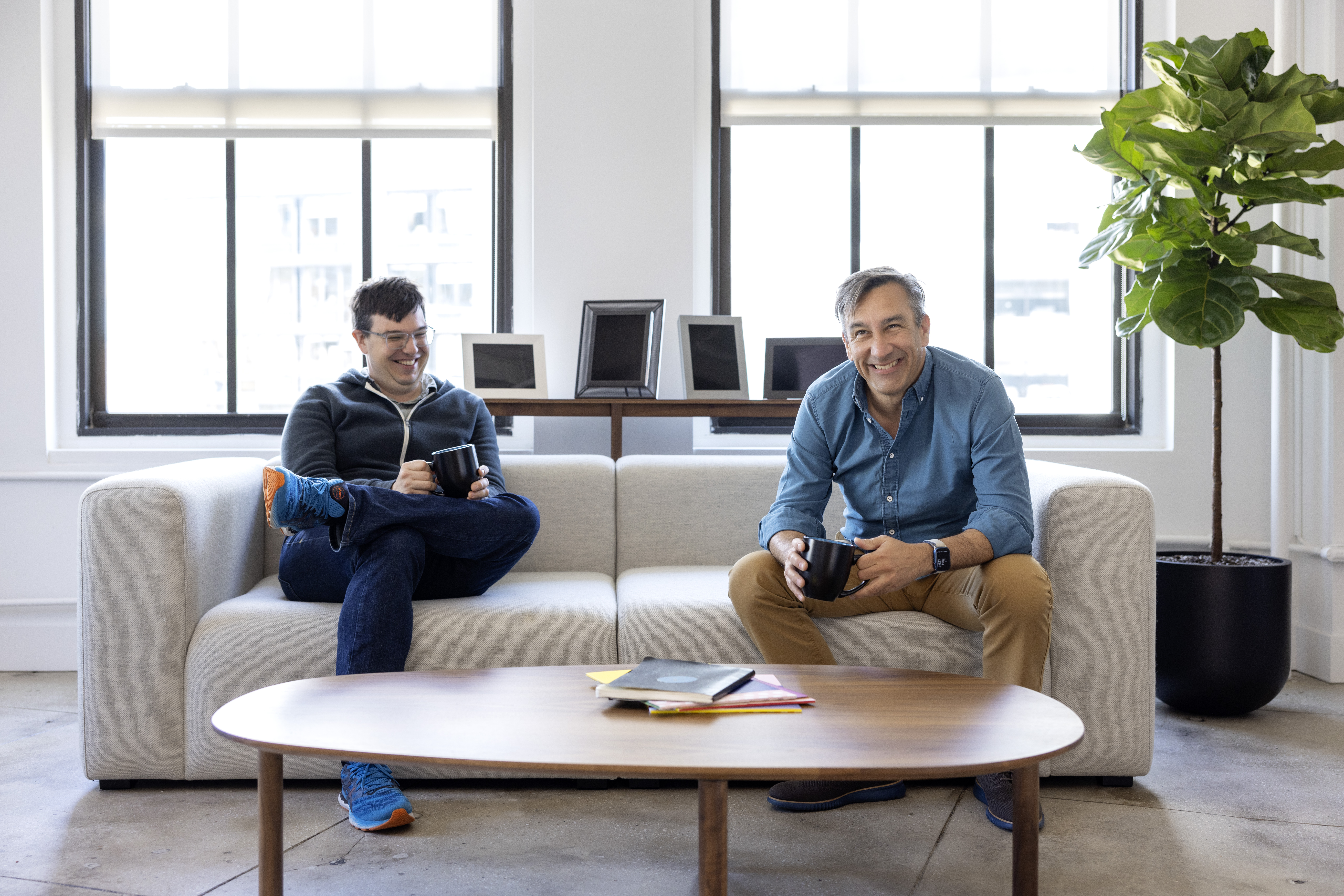 Chowdhury and his co-founder Eric Jensen (pictured above with Jensen on the left), who is Aura’s CTO, are friends that go back a long way in the search for using technology to connect people with information and to each other. The two first worked together years ago at AOL when it was still a major homepage destination trying to contend with the rising star of Google.

Then after leaving AOL, along with other ex-AOL’ers, Chowdhry and Jensen founded Summize, a search engine taking a new approach to search using content produced by internet users as its guide, which eventually trained its eyes on one juicy dataset in particular, that of the up-and-coming social site Twitter.

Summize was in fact Twitter’s first search engine, and in 2008 Twitter acquired it to integrate that functionality directly into the platform. Twitter had just 12 employees at the time, and Summize has six, so it was a significant deal for the two.

(Worth a read: Former Twitter CEO and co-founder Ev Williams’ discussion with TC founder Mike Arrington, after Arrington initially reported rumors of the deal. Ev discloses that Twitter chose to buy and integrate rather than partner with another, larger third party to build and power Twitter’s search. Was that Microsoft? Google? Yahoo!?)

Chowdhury, Jensen and several others stayed on for several years to build the early versions of Twitter’s search and new features like trending topics — Chowdhury has been described as the father of the very concept of trending, as the person who wrote the first algorithm to produce trends on Twitter — and to help the company scale out its engineering operations as it quickly added more users and more browsing activity. Chowdhury was the platform’s chief science officer, and Jensen headed search and relevance.

By 2011 most of the Summize team was through its earn-out period and transitioned out of the company. It was then that the pair started to think of what comes next.

Chowdhury and Jensen may have walked out of Twitter, but they were not fully disengaged from the concepts that got them into Twitter in the first place.

Network concepts — how people connect with each other — is at the core of how Twitter works, and it was something that stayed on their minds. “We started thinking, something is missing here,” Chowdhury said in an interview.

They turned their attention to smaller networking experiments, where people share things that are more personal with smaller groups, unlike the open-ended nature of Twitter, or indeed others like Facebook. They weren’t the only ones — the app Path was a notable attempt to build around the concept of close-knit groups, and Facebook itself started to tailor how users could build sharing groups, too.

“But they were all broken in some way,” he said, either because of privacy reasons, or discovery or engagement challenges.

“We recognized that small networks were very fragile,” he said. “Without a power user, the network usually falls apart. It is also a challenge to monetize these networks.” At the same time, he added, “Smartphones with great cameras were being widely adopted. Photo content and sharing between loved ones were being underutilized.”

That is what led Chowdhury and Jensen to building both software — a photo sharing app that connected users and their pictures together — complemented with a piece of hardware, the frame, to view those pictures but also hit a couple of the other challenges:

“A Wi-Fi-connected frame actually acts as the ‘power user’ — keeping content fresh without requiring constant engagement or interaction by the network — all with the goal of connecting family members and enjoying photos.” And critically, selling a frame means building a monetization stream without resorting to advertising and all that data mining that comes with it, which no one really wants in personal, close experiences.

“We realized we could build a nice, private network for photos captured in the app, but living on in an evergreen way in the frame that could bring joy,” he said.

The company’s original name was Pushd. Chowdhury said that was because the startup wanted to work around push notifications to keep people connected — prescient considering that this is the core of how a lot of apps, including the likes of BeReal, remind users to engage today. Chowdhury added that “a lot of the learnings from Pushd formed into what is Aura today.” The startup was renamed prior to the first frame launch in 2016.

Opening up the digital shoebox

In these days of tablets and video-screen-fronted digital assistants in the home, it may sound a little anachronistic to focus on a digital picture frame. They were, after all, some of the earliest digital products to enter the domestic environment. By 2011, when Aura was getting off the ground, there were already 12 million digital frames sold, working out to 15% of all homes in the U.S.

Yet as Chowdhury and Jensen saw it, digital frames were quickly hitting a wall in terms of their development: Not only were smartphones and tablets taking over the digital photo taking and consumption experience, but frames were clunky and fundamentally disconnected from those smartphones, relying on thumb drives and other means to be updated.

But frames weren’t the only digital relic hitting a wall. Photo libraries have been growing exponentially across the wider consumer market. Back in 2011, there were already some 300 billion digital photos taken in aggregate on phones, spurring a question for Aura’s founders: “How do you get back to all that content?” Chowdhury asked.

That question has only become more persistent: Apple said in September 2022 that more than 3 trillion photos were taken on iPhones in 2021 alone. The proverbial shoebox of photos we never manage to organize suddenly sounds kind of quaint.

Putting that together, Aura’s founders saw that there could be an opening in the market for a better frame, one that worked better with the devices now being used to capture pictures, without pulling users in the different directions (and different price points) that tablets do, and by making it easier to consume and enjoy the pictures we and others have taken.

The company at its heart is a technology player.

Among its work, Aura has built its own privacy-focused facial recognition (based on meta data not faces themselves) and computer vision algorithms in order to create intelligent picture clusters, which sit within its apps. It is building better “scanning” technology to capture artwork and other two-dimensional objects its users might want to see displayed in their frames. And it’s working on ways to potentially add temporary frame picture contributors, as well as more sharing between trusted, but not necessarily close, groups within the app that might not be connected to a single frame at all.

“How do you make it easier to collect and share photos, say, from a wedding,” he asked. “Beyond your close friends and family, it’s all about the continuation of telling a story, capturing those pictures and seeing them in your home.”

I found that Aura is currently sitting on a number of patents, around 50 when you count those issued and in progress. But not all of them are related to frames, photo sharing and social networking; several filed in the last couple of years are related to health and medical monitoring, in particular during pandemics and epidemics.

“This goes back to the Pushd days,” Chowdhury said. Some of the startup’s early work on small networks “had to do with location notifications of people in your private network.” In the case of healthcare, he said, it could help inform caretakers if an elderly parent did/did not leave their home for safety/well-being purposes. “This never became a product that Pushd launched and was not used in the creation of Aura, but the team’s early work and ideas were patented, COVID-19 perhaps being the spur for that, given that the filings are relatively recent.”