Communities themselves can support groups of up to 1,024 users and offer end-to-end encryption.

Some of the features developed for Communities, like emoji reactions, large-file sharing (up to 2GB) and the ability for admins to delete messages, had already made their way to the WhatsApp platform ahead of today’s launch. Now, the company says polls, 32-person video calls and larger group sizes will also be supported on WhatsApp more broadly outside of Communities.

The new feature may initially draw some comparisons with Facebook Groups, as they both support things like sub-groups, file sharing, admin functionality and more. But while Facebook Groups are often used by disconnected strangers who share a common interest, WhatsApp Communities are meant to be used by members who may already be connected in the real world. Unlike on Facebook, WhatsApp is phone number-based, meaning people joining these discussion groups already have some familiarity with one another, as they may have exchanged phone numbers or at least have shared their number with a group admin. However, the phone numbers will be hidden from the wider Community and only made visible to admins and others in the same sub-groups as you.

This is meant to balance users’ demand for privacy with the need to allow fellow group members to reach you. For instance, you may not personally know every parent on your kid’s sports team, but you’re likely comfortable interacting with them in a private group setting that may exist as a sub-group of the entire school’s Community.

In addition, unlike Facebook Groups, which can be discoverable on the platform, WhatsApp Communities are hidden. There will not be a search and discovery feature available — you have to be invited to join. 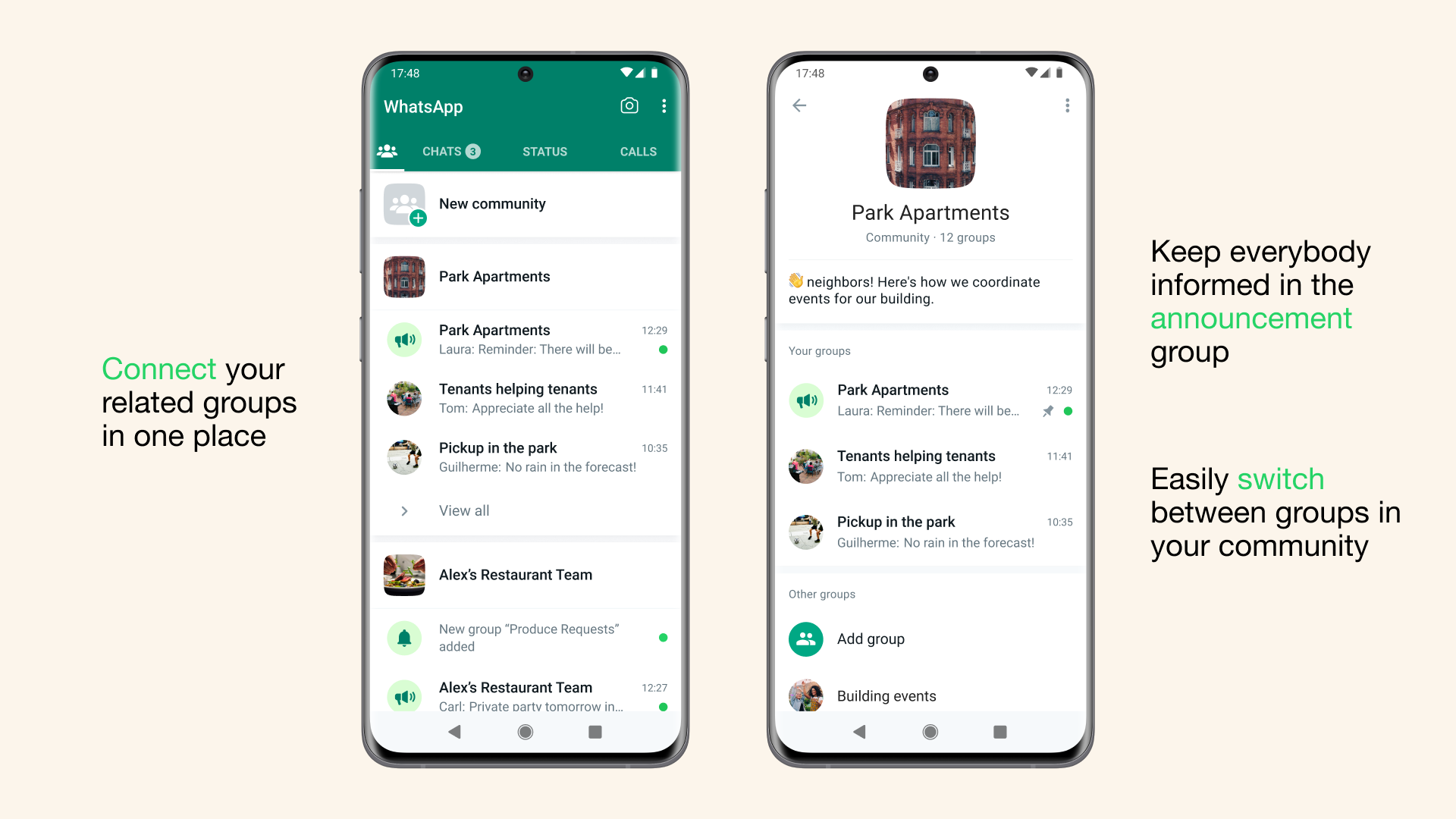 At launch, admins of existing group chats will be able to transition their group to Communities, if they prefer, or they can opt to re-create their group as a Community from scratch. Admins also have the power to add members to the groups or they can send out invite links that allow others to become Community members.

Communities are structured with one main announcement group, which alerts everyone of the most important messages. But members can only chat in small sub-groups the admin has approved. This can keep members from being bombarded with messages about group happenings and events they’re not connected to. For example, members might create a sub-group for a volunteer project or planning group, where only some people would need to chat.

The launch of Communities could challenge other apps that have grown popular for private and large group communications, including Telegram and Signal, as well as standard messaging platforms like iMessage, and apps aimed at organizations or schools like GroupMe, Band, TalkingPoints, Remind and others.

In an announcement, WhatsApp also stressed the encryption aspects of the Communities feature, saying that the company is “aiming to raise the bar for how organizations communicate with a level of privacy and security not found anywhere else.”

“The alternatives available today require trusting apps or software companies with a copy of their messages – and we think they deserve the higher level of security provided by end-to-end encryption,” it said. 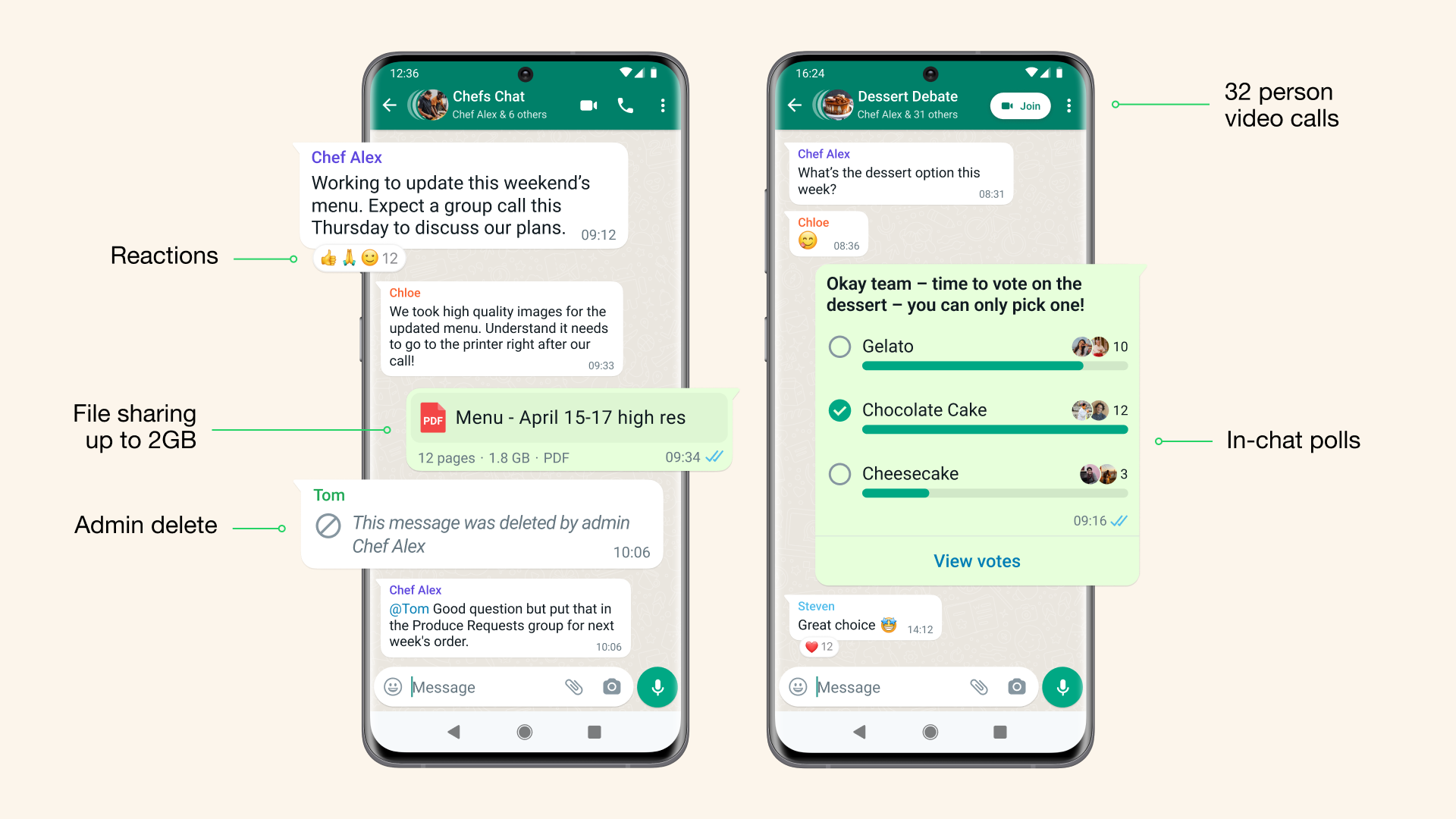 There are still concerns that Communities like this could facilitate groups that engage in illegal or dangerous behavior, similar to how Facebook Groups have allowed health and election misinformation to thrive in recent years, stoking the fires that led to events like the January 6 Capitol riot, for instance. WhatsApp’s measures to stop such things seem limited, as the company says it will rely on the available unencrypted information about the Community, like its “name, description and user reports” to determine if action is needed.

It says if it finds a group is being used to distribute child sexual abuse material, coordinate violence, or engage in human tracking, it will ban the individual Community members and admins, disband the Community or ban all the Community members, depending on the situation. However, the company did note that messages that have already been forwarded will only be able to be forwarded to one group at a time, rather than five, which is today’s forward limit, in an effort to reduce misinformation’s spread.

The company, of course, is also still working to rebuild its reputation on the privacy front after the backlash over its hard-to-understand policy update last year, which caught the eye of some anti-competition authorities and regulatory bodies, including in the EU and India. WhatsApp later added more clarity to its policies and noted the launch of Communities would not require another policy update.

Communities have been in testing with over 50 organizations in 15 countries to gain early feedback. In August, WhatsApp confirmed it had rolled out the feature to a small number of testers but didn’t offer a launch date.

Today, the feature will begin to roll out to the wider WhatsApp user base, reaching all users worldwide over the next few months on both Android and iOS.

Update, 7:20 a.m. ET: Uncredited Mark Zuckerberg’s statement as the comment was in the WhatsApp blog post. His statement is here.