Benjamin Döpfner has been building companies since he was a teenager.

One of his more recent ventures was based in Berlin, and at the time of its founding in 2019, Germany actually had negative interest rates — meaning that the company was paying back 50 basis points, or half a percent for each euro that was in its account.

“That was very, very frustrating for me,” Döpfner recalls. So he reached out to his bank, asking about a corporate treasury offering but was told it would not work with companies that were not able to deposit at least €100 million.

That frustration led the young entrepreneur in March of this year to start Vesto, a treasury management startup that aims to help other startups “manage, protect and extend their runway, instead of letting it sit idle in a checking account,” according to Döpfner.

“Ideally, companies should never have a dollar of idle cash, yet there are trillions, floating around in near zero-interest checking accounts,” he told TechCrunch. “We want to eliminate idle cash, and help companies put it to work.”

Traditional banks have solutions, as do a few startups that have emerged over the recent years. But Döpfner argues that other alternatives are inflexible or risky and “come with big restraints.”

“Money is locked in a slow, stodgy institution with little visibility and poor customer service, along with sky-high account minimums, rendering the product unavailable to most,” he said. “Newer startups are tackling corporate treasury from a crypto angle, leaving company funds at strong risk, while others tie money up into ‘one-size-fits-all’ pooled accounts limiting control…with very little customization for companies.”

Vesto is registered with the U.S. Securities and Exchange Commission (SEC) as an investment advisor.

“The interaction is similar to a robo advisor,” Döpfner said. “Kind of like a Betterment or Wealthfront for businesses. But our offering is actually much farther-ranging than just a robo advisor, as our investment selection and management process is very tailored and high-touch when compared to a robo experience.”

Vesto so far has a couple of unnamed paying pilot customers under contract and, according to Döpfner, is on track to see $100 million in assets under management by year’s end or early next year. Deposit sizes are generally higher, Döpfner added, with some amounting to $10 million or $20 million.

The company is launching to the public today and announcing that it has raised $2.8 million in a seed round led by Contrary Capital, with participation from Susa Ventures, SV Angel, Coalition and “strategic” angels, including the founders of SoFi, Tinder, DoNotPay and others.

Vesto works with a technology partner that acts as the intermediary between itself and the custodian, BNY Mellon. But Vesto interacts with its customers and serves as a manager of their investments after creating an investment proposal.

“There’s a reporting layer, a control layer,” Döpfner said. “So that companies can understand what’s happening with their cash and have full visibility while not giving up control.” For example, he adds, companies are able to withdraw money anytime they want or need it.

“Usually we’ll build a portfolio consisting of either U.S. Treasuries or money market fund, or corporate bonds — sometimes CDs,” he explained. “We tried to really maximize safety, liquidity and then yield. We want to achieve good yields for customers but at the same time invest into low risk investment assets.” 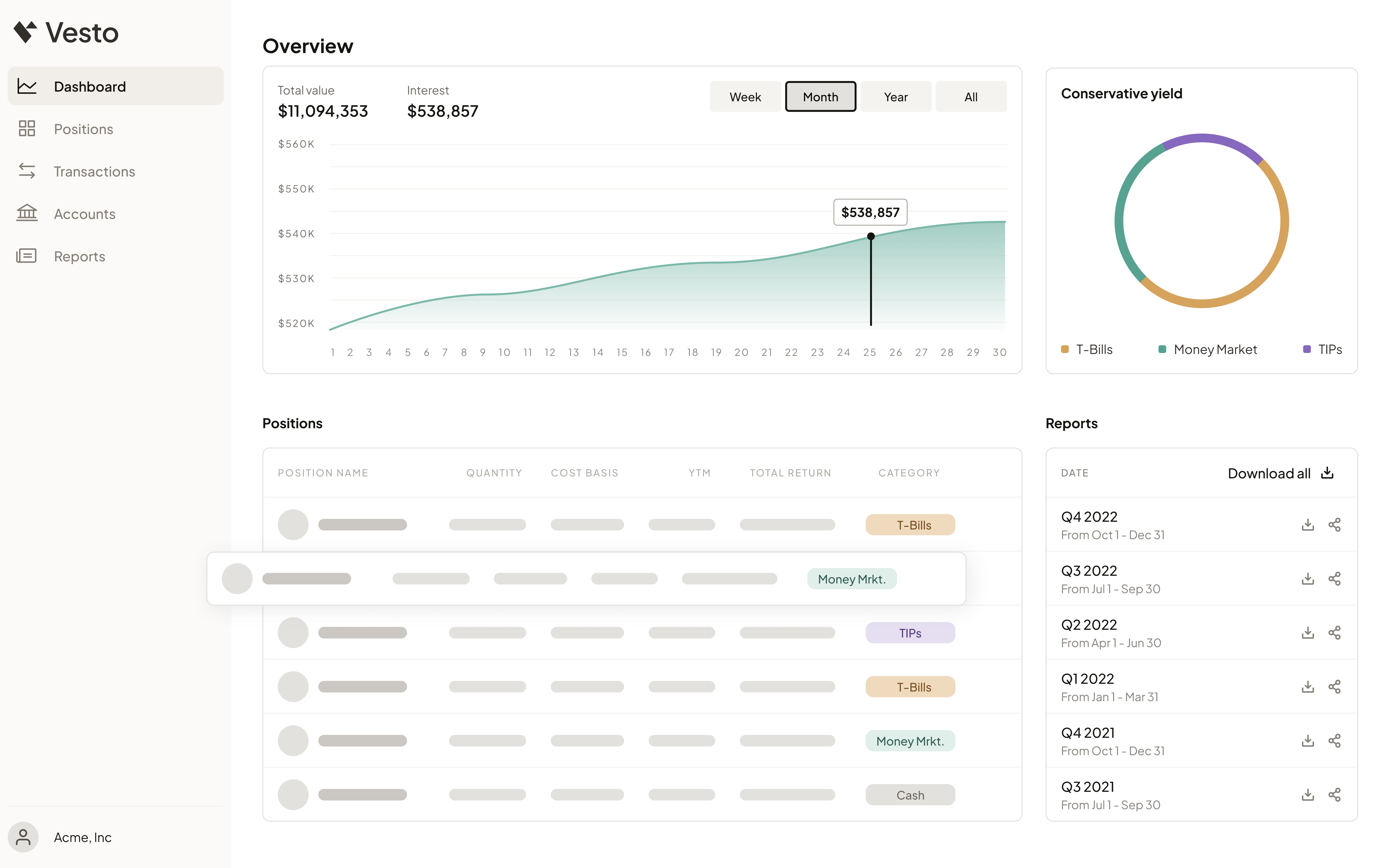 Vesto makes its money by charging a based fee on AUM (assets under management). Its target customers are Series A through Series D companies but in the longer term, wants to open up its offering to pre-seed-stage companies to enterprise to small businesses and nonprofits.

Looking ahead, Döpfner envisions going after the full financial stack.

“Getting yield on cash is only one piece of the financial stack, and we want to cover the whole thing. Treasury is an ideal wedge because cash is the lifeblood of a startup. Every decision a startup makes can be traced back to how much runway they have, and that runway will be stored with,” Döpfner told TechCrunch. “Corporate treasury — while a gigantic market — is simply the first step toward covering the rest of the stack.”

Contrary Capital General Partner Will Robbins notes that some of his firm’s portfolio companies are “leaving several million dollars per year on the table by not putting idle cash to work more effectively.”

“Especially in this fundraising environment, managing runway is critical, and Vesto has built the best product for doing that,” he wrote via email.

Other products treat corporate treasury as a “nice to have” feature, in Robbins’ view.

“As great as big banks like First Republic or new entrants like Mercury are, founders just don’t get deep value from buying CDs or basic Treasury bills. Vesto’s mindset is focused on giving finance teams the power of a full asset manager in one software platform,” he said. “Companies like Apple and Airbnb famously manage their idle cash with ‘internal hedge funds’ and allowing every company to do the same is exciting.”