More than 100 venture capital firms including Bloomberg Beta, 776 and M13, with over $106 billion in assets under management, are standing together to launch VCs for Repro, a coalition stating that criminalizing abortion is a violation of human rights that stifles innovation.

Announced today, the group seeks to entice more financial leaders to support and vote in favor of reproductive rights come the midterm elections on November 8.

“Criminalizing abortion violates human rights and is anti-innovation.This matters to the people investing in the future of our economy. Vote like it matters to you on November 8, 2022,” VCs for Repro’s statement read.

“There is the outdated pressure for VCs to have to toe the line … about where they stand on abortion.” Simmone Taitt, founder, Poppy Seed Health

Speaking to TechCrunch, Pitts and Turner said progressives within the investment community need to start better utilizing their economic and cultural prowess to shift and shape society. For a long time, people have been silent and afraid to speak up. Their hope is that changes today.

“The venture community has a tremendous opportunity for socioeconomic impact,” Turner told TechCrunch. “They determine which entrepreneurs and ideas get funded, which problems get to be tackled and whose experience is centered in those business models. Our hope for the coalition is that it inspires those in positions of leadership to find their voice right now. And then to follow that with action.”

Lucas added that there is little that determines a woman’s life and career trajectory more than whether she can prevent and plan pregnancies. She said that abortion restrictions hamper the nation’s talent mobility, diminish workforce participation, depress earning potential and can even drive families into poverty.

“I’m hopeful this movement puts pressure on business and civic leaders to see that restricting abortion access is not just a moral or social issue, it is an economic issue,” she told TechCrunch.

Already, the reversal of Roe v. Wade is making waves throughout the startup and venture ecosystem.

Founders situated in blue cities within red states are looking at relocating themselves and their workers to places that support reproductive rights. Meanwhile, women’s healthcare startups are gearing up for a battle as they seek to continue offering reproductive health services. Investors are starting to ponder how due diligence and ESG criteria will change, with some noting that much-needed innovation in reproductive healthcare is bound to occur.

“We have an opportunity to stand together as an industry to make a statement,” Pitts said. “People have been afraid to speak up. This coalition gives them the opportunity to speak up as one voice and not be separated and therefore exposed and afraid of the potential backlash.”

VCs for Repro is a commitment to use social and cultural resources to incite discussions and action rather than a promise to allocate economic capital. That’s significant, too, because it foregrounds that venture is more than just the bottom line. New key players within the industry see silence as unsuitable at this moment in U.S. history. 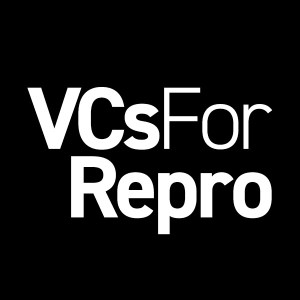 “As a people-first early-stage venture firm, the impact we aim for is an enduring and sustainable future,” Christine Choi, a partner at M13, told TechCrunch. “Fostering equality, inclusion, diversity and equity in the workplace is intentional and active work. We believe that autonomous rights, including our employees’ right to make their own reproductive health decisions, are fundamental for a working society and for us all to thrive.”

Founders are also expressing support for VCs for Repro. Simmone Taitt, the founder of Poppy Seed Health, told TechCrunch that she hopes the coalition will eventually lead to an increase in funds for companies like hers that aim to solve gaps in the healthcare space.

“While many of us feel passionate about protecting reproductive rights, there is the outdated pressure for VCs to have to toe the line … about where they stand on abortion,” Taitt said. “It hurts women; it hurts families. I hope we can start to see an end to that today with the public and bold coalition of these investors who are funding the future of healthcare while also seeing big returns.”

Other firms that have signed on to the coalition include January Ventures, Hustle Fund, New Media Ventures and Female Founders Fund. Those looking to sign on can fill out this form to help with the work that has to be done.

“It’s important to have people in venture loudly support abortion rights and equitable healthcare, especially men. … It is an important use of our privilege and we cannot let this be a battle that only those who are or can become pregnant fight,” said Ed Zimmerman, a founding partner at First Close Partners, whose firm joined the coalition.

So far, there is some form of abortion restriction in dozens of states throughout the U.S., including Idaho, Texas, Mississippi and Wisconsin, which have full bans. Voters in Kentucky will decide on Tuesday whether the state constitution should explicitly say it doesn’t support the right to abortion; those in California, Vermont and Michigan will vote on whether their state constitutions should protect the right to abortion.

Right now, Pitts noted that the loud political voices within venture tend to lean conservative, leaving a gap for progressives to start wielding influence. Or, as one founder previously told TechCrunch, to start “fighting fire with fire.”

An overarching goal of the coalition is helping the investment community reframe sociopolitical issues, like the toppling of Roe, as those that gravely and concurrently impact human lives, economies and businesses. Following the midterms, VCs for Repro plans to create an investor steering committee to look at other issues such as immigration, privacy laws, pay equity and food systems, as well as continuing the promotion of reproductive rights. It also hopes to work with existing organizations, businesses and entrepreneurs on addressing the urgency of these matters.

After all, in just a week’s time, we’ll be gearing up for the next presidential election. That should be fun.

Editor’s Note: In advance of the November 8, 2022, midterm elections in the U.S., VCs for Repro said more than 100 firms with over $106 billion in assets under management have joined the coalition.