Some three years after first introducing a curated news section for publishers, Meta has confirmed that it’s ditching the humans and leaning entirely on algorithms for Facebook News in all markets where it’s available.

Meta, then known simply as Facebook, introduced Facebook News back in 2019, kicking off initially to a small subset of users in the U.S. before eventually expanding nationwide and into international markets starting with the U.K., Germany, Australia and France.

Facebook News, essentially, is a dedicated tab inside Facebook that surfaces notable local and international news relevant to each market. Although most of the surfaced articles were already determined algorithmically, there was a “top stories” section curated by humans.

Soon, this section will also be determined by algorithms. 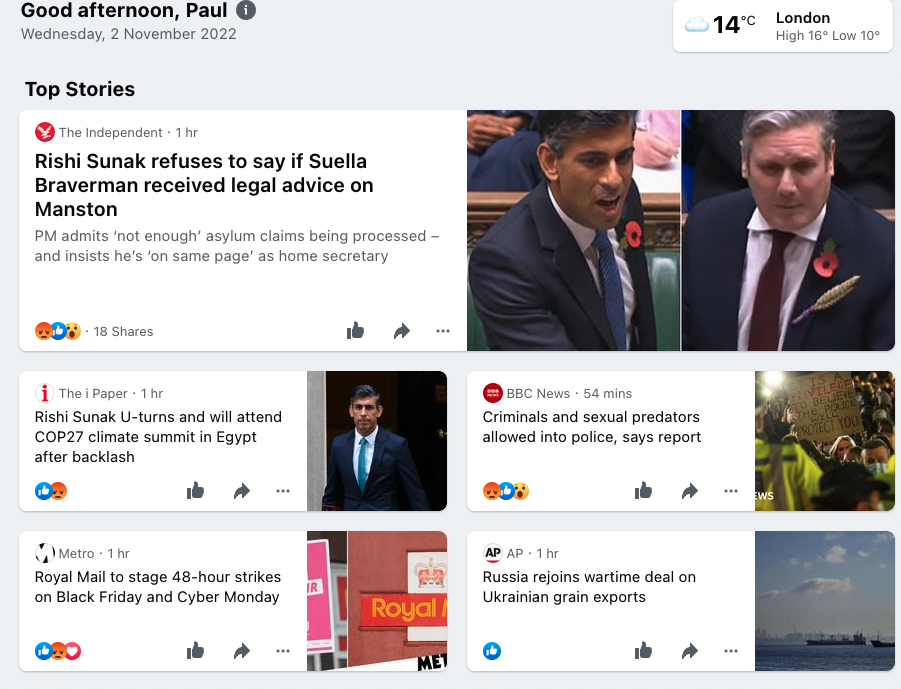 As per a report in U.K. trade publication Press Gazette today, Meta is ending a contract it had with Axel Springer-owned Upday, which provided the freelance workforce that powered news curation in the U.K. market, albeit with heavy direction from the powers-that-be at Meta. As an aside, this followed shortly after a negative report from Press Gazette detailing some of the working conditions the freelancers had to contend with.

“We are always evaluating our global curation partnerships based on user and product needs,” a Meta spokesperson said in a stock statement.

The changes will come into effect in the U.K. some time in early 2023. However, the Meta spokesperson confirmed to TechCrunch that it will in fact be ending human-curated stories in all markets where Facebook News operates.

As noted by Press Gazette, Upday originally curated the German news tab, but due to conflict-of-interest concerns owing to parent company Axel Springer’s association with the news industry, Meta gave the curation contract to a local press agency called the Deutschen Presse-Agentur (DPA) earlier this year. But in the wake of this latest news from Meta, it seems the DPA’s role in curating the top stories in Facebook News will be limited to the duration of its remaining contract.

While news-sharing has been a cornerstone of the Facebook platform almost since its inception, it’s clear the company has been making moves to deprioritize this aspect of the social network in favor of the so-called creator economy. Part of this has also involved renaming the trusty ol’ news feed simply as “feed.”

But this shift has been driven, perhaps, by a broader industrial pushback that has led to new legislation in countries such as Australia that now stipulate that online platforms such as Facebook compensate publishers for their content. Similar mandates are working their way toward fruition in other markets too, including the U.S.

While Meta is seemingly reducing its investment in news — from a human perspective, at least — there is no indication that Facebook News itself is going the way of the dodo any time soon. But that is one potential outcome here, given the company claims that creator-driven content is what its users are most interested in — both on Facebook and on Instagram.

The Meta spokesperson said that it makes little sense to over-invest in areas that most of its users are not interested in.