Earlier this year, Meta posted its first quarterly revenue decline. Once again, Meta’s financials aren’t inspiring much faith in its investors this quarter. Meta’s revenue declined 4% year over year to hit $27.7 billion; but Meta CFO David Wehner pointed out on the earnings call today that some of this decline is owed to inflation. Meanwhile, net income was just $4.395 billion, down from $9.194 billion year over year.

This decline in income is mostly due to Meta’s huge investment in the metaverse. Reality Labs, Meta’s virtual reality division, lost $3.672 billion this quarter. The same thing happened in Q1, when CEO Mark Zuckerberg justified a $3 billion loss by saying that the 2030s will be “exciting.” 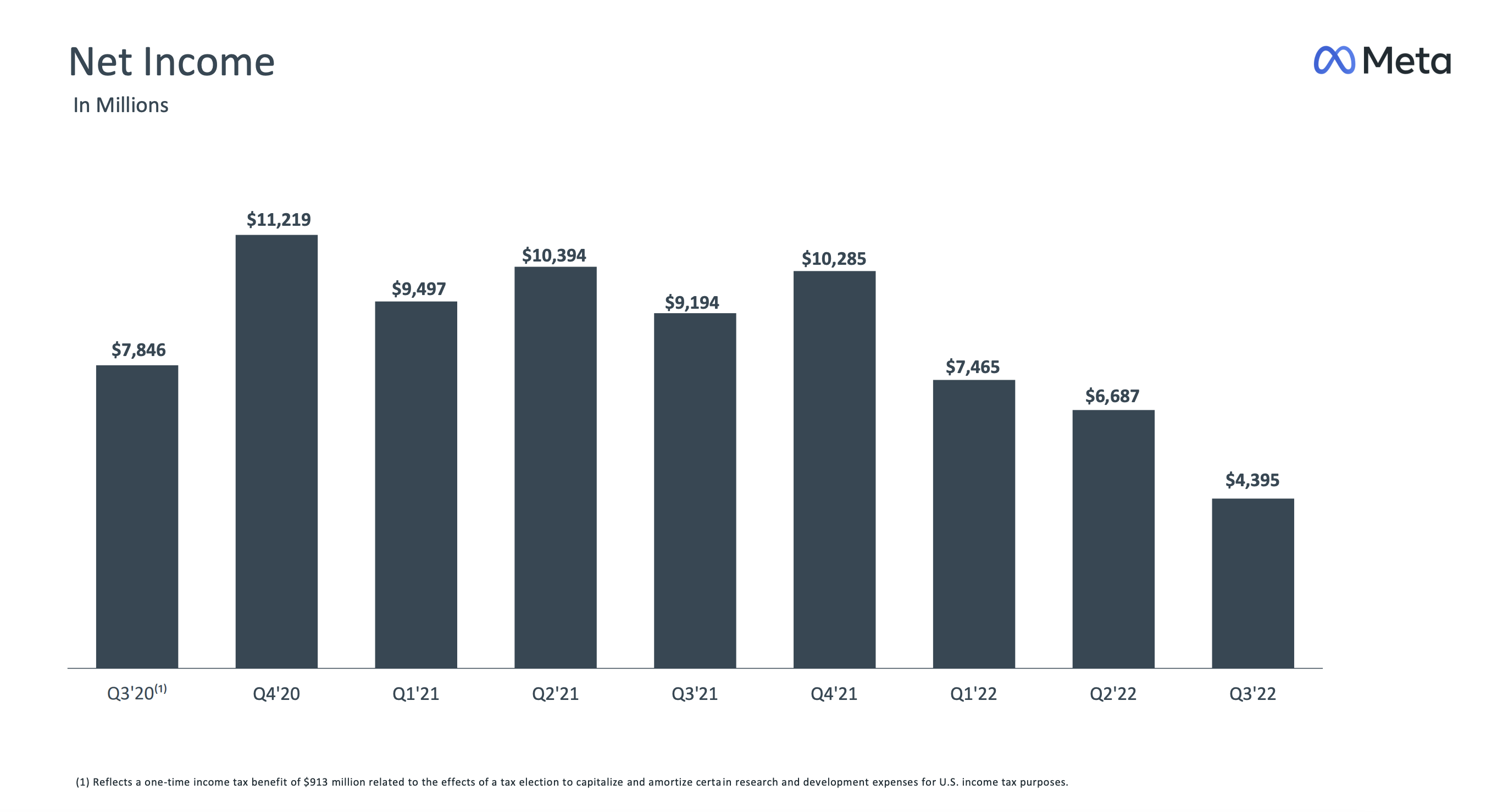 “There’s still a long road ahead to build the next computing platform. But we’re clearly doing leading work here. This is a massive undertaking and it’s often gonna take a few versions of each product before they become mainstream,” Zuckerberg said on today’s earnings call. “But I think that our work here is going to be of historic importance and create the foundation for an entirely new way that we will interact with each other and blend technology into our lives, as well as the foundation for the long term of our business.”

Meta also casually dropped the news that it will launch its next consumer-grade Quest headset next year, which is responsible for some of these costs. Meta just shipped its first high-grade Quest Pro headsets this week.

Zuckerberg also elaborated on Meta’s overall plans for the metaverse. He’s now referring to Horizon Worlds, the company’s underwhelming social VR platform, as something that Meta is “iterating on out in the open.” He also called the platform an “early product.”

“Obviously it has a long way to go before it’s going to be what we aspire for it to be,” Zuckerberg said about Horizon Worlds. “We think we’re doing some leading work there, but obviously we need to get that into the product and continue innovating on that.”

He also emphasized Meta’s commitment to developing VR and AR technology in general.

When it comes to social media, Zuckerberg shared some updated figures. He said that there are now more than 140 billion Reels plays across Facebook and Instagram, which is a 50% increase from six months ago. Across all platforms, Reels has a $3 billion annual revenue run rate. As the company has stated in past earnings calls, Meta is investing heavily in AI content discovery to compete with platforms like TikTok.

Meta also shared that hiring will significantly slow next year. The company added 3,700 net new employees in Q3, down from 5,700 net additions in Q2.

“We expect hiring to slow dramatically going forward and to hold the headcount roughly flat next year relative to current levels,” Wehner said.