Several years ago, Fabrizio Del Maffeo and a core team from Imec, a Belgium-based nanotechnology lab, teamed up with Evangelos Eleftheriou and a group of researchers at IBM Zurich Lab to develop a computer chip. Unlike conventional chips, theirs was destined for devices at the edge, particularly those running AI workloads, because Del Maffeo and the rest of the team perceived that most offline, at-the-edge computing hardware was inefficient and expensive.

After incubating a startup — Axelera AI — to commercialize their chip technology within the blockchain company Bitfury Group, Del Maffeo and team secured capital from VCs including Imec’s venture arm, Imex.xpand. Innovation Industries led a $27 million Series A in Axelera AI that closed this week with participation from Imec.xpand and the Federal Holding and Investment Company of Belgium. In addition, the Netherland Enterprise Agency awarded Axelera AI a $6.7 million loan commissioned by the Ministry of Economic Affairs and Climate Policy.

“One of the main challenges we’re facing is the availability and accessibility of AI to different groups and industries. Some businesses would benefit from AI, but don’t have the knowledge or technical expertise to integrate its benefits into day-to-day operations,” Del Maffeo told TechCrunch in an email interview. “We’re engineering the AI platform to help overcome this access barrier … [by] delivering a game-changing, user-friendly and scalable technology with superior performance and efficiency at a fraction of the cost of existing players to accelerate computing vision and natural language processing at the edge.”

Axelera is working to develop AI acceleration cards and systems for use cases like security, retail and robotics that it plans to sell through partners in the business-to-business edge computing and Internet of Things sectors. The cards and systems pack Axelera’s Thetis Core chip, which employs in-memory computing for AI computations — “in-memory” referring to running calculations in RAM to reduce the latency introduced by storage devices.

Axelera is also creating software to manage its chip, which Del Maffeo claims will be “fully integrated” with leading AI frameworks — e.g. PyTorch and TensorFlow — when it’s made available. 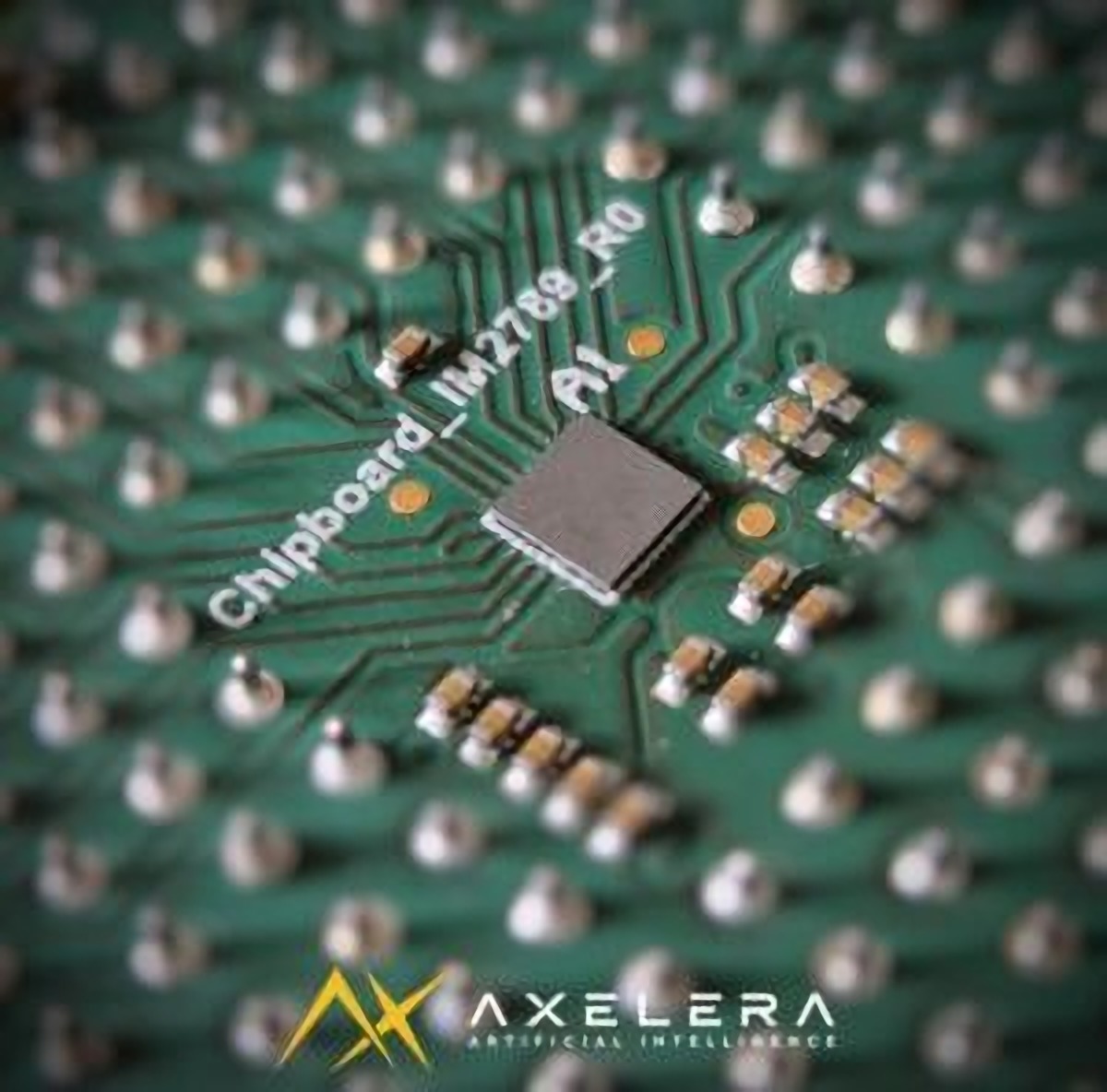 “We’re democratizing AI access,” Del Maffeo said. “When our product launches … we aim to [deliver] a chip that packs the power of an entire AI server.”

Axelera has a ways to go before it reaches commercialization, however. The company only last December produced its very first testbench chip, and Axelera doesn’t expect to begin delivering to customers until sometime during the first half of 2023.

But despite the fact that Axelera is both pre-market and pre-revenue and considering venture debt rounds moving forward, Del Maffeo believes that the company is well-positioned to nab a foothold in the market for custom AI chips. He notes that Jonathan Ballon, the former VP and general manager of Intel’s edge AI and Internet of Things group, is joining Axelera as chairman. And Del Maffeo points out that Axelera continues to hire aggressively, with close to 85 employees based in Europe, remotely and across the company’s offices in Eindhoven and Milan and R&D centers in Leuven and Zurich.

Following an expansion in the U.S. and Taiwan within the coming months, Del Maffeo expects Axelera will enter early 2023 with 130 to 140 employees.

“While the pandemic led to several shortages in the chip industry, we’ve been fortunate to see significant growth since we launched in 2021,” Del Maffeo said. “While we don’t disclose our burn rate, we can share that we’re well-positioned to raise a new investment round in 2023, significantly larger than our Series A, and we’re already receiving interest, including from more American investors, to help us bring the company to the next stage … We’re carefully building our customer base and partner ecosystem with a curated cohort of companies who have already shown strong interest in our AI platform. Later this year, we’ll also open a unique collaboration opportunity for leading companies to become early adopters of our AI platform.”

Assuming Axelera can deliver on its promises, it stands to make some serious cash. The edge AI hardware market is projected to grow from 920 million units in 2021 to 2.08 billion units by 2026 — a lucrative uptick. According to one estimate, the AI chips market alone is poised to be worth $73.49 billion by 2025.