The stock price of South Korea’s internet giant Kakao tumbled on Monday after a fire at a data center that cut off power on Saturday, causing several service malfunctions.

The blaze at the SK C&C data center, which houses the servers of Korea’s two largest internet companies — Kakao and Naver — disrupted Kakao’s messaging, ride-hailing, payment and game apps, and Naver’s internet search and news services, over the weekend.

On Monday morning, Kakao’s share price dropped more than 9%. Its peer Naver also slid 2% at the opening of trading before recovering.

At the time of writing, Kakao said it had restored KakaoTalk, the country’s dominant messaging app — with more than 46 million monthly active users in South Korea as of September 2022 and 53 million globally. On Monday afternoon it also said it had completed recovering its financial services. But some other services are still down.

Meanwhile, Naver, which faced partial disruptions as a result of the fire on Saturday, quickly restored most of its operations on Sunday.

According to a report by Bernstein, Kakao’s slow recovery process was caused by the company’s lack of owned server infrastructure and “high dependence” on the SK C&C data center. It also highlights Kakao’s lack of a well distributed backup system. The report pointed out that Naver was able to resume its primary services promptly because it has owned server infrastructure and a well-designed backup process.

KakaoTalk remains the dominant messaging service in South Korea and the Bernstein report predicts it will maintain its position despite the outage, given how far behind its rivals are in market-share terms. Additionally, it points out that Kakao’s messaging app is linked to other services such as Kakao bank, payment and ride-hailing services, so users are unlikely to replace the app with less fully featured alternatives like WhatsApp or Telegram, per the report.

The second largest messaging app after Kakao in South Korea is FaceBook Messenger, but it has only 3.9 million MAU as of September 2022; Naver’s messenger app, Line, has about 1.6 million monthly active users. 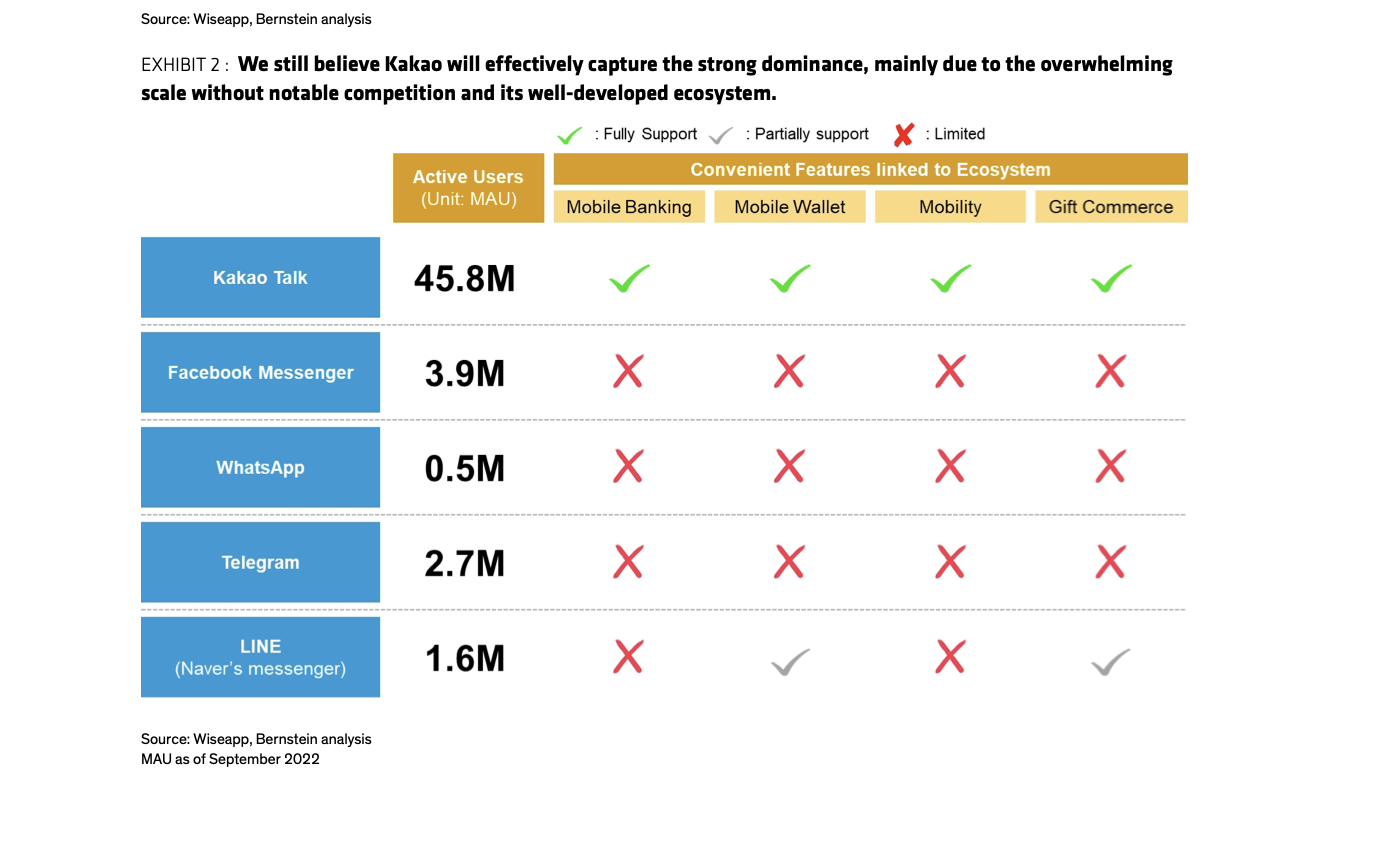 In its statement on Saturday night, Kakao said the fire broke out at around 3:30 PM (local time). It added that it is investigating the matter.

A statement by Naver on Saturday afternoon said it is aware of issues impacting its services as a result of the fire.

South Korean President Yoon Suk-yeol also made public comments on Monday following the incident — remarking that a private company operates KakaoTalk but describing it as practically a national communications infrastructure. Yoon called on the government to investigate the exact causes of the fire. “I respect corporate autonomy and creativity, but that is based on the premise that the market reasonably allocates resources and income in a system of fair competition,” Yoon said. “If a monopoly situation causes market manipulation, the government should take systemic action.”