A new company is setting out to challenge Airtable, the 10-year-old company recently valued at a whopping $11 billion, with a slightly different take on what it means to be a no-code database platform.

NocoDB is one of a number of startups to emerge on the scene with plans to usurp the mighty Airtable, with an open source foundation serving as a core selling point. While NocoDB works in a similar fashion in terms of allowing non-technical users to create fresh databases, its twist is that it also works directly on live “production” data that resides in databases such as Postrgres, MySQL or MariaDB, or data warehouses, and turns them into what it calls a “smart spreadsheet”.

This allows anyone to leverage legacy databases without needing IT’s input — no SQL queries or code required. It’s all about enabling business, finance or even marketing teams to connect to live data and collaborate with developers to build no-code applications.

U.K.-based founder and CEO Naveen Rudrappa claims that the core open source project has already been used by more than 2,000 companies, including behemoths such as Google, Walmart, American Express and McAfee.

“The adoption we’ve seen has been really unprecedented — we’ve had 7 million Docker downloads within one year of launch and more than 30,000 GitHub stars, putting us amongst the top 350 open source projects in the world,” Rudrappa told TechCrunch. 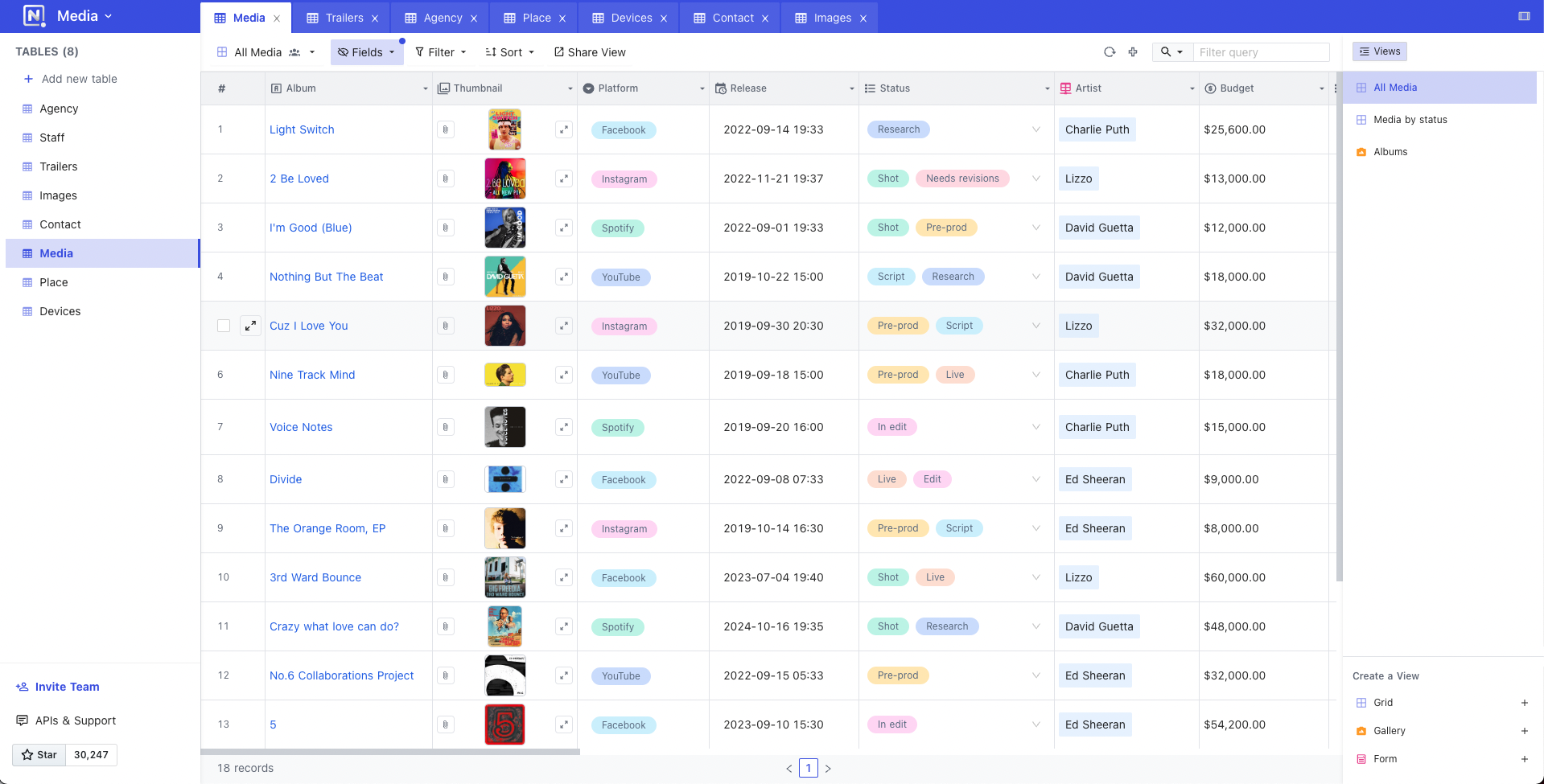 A little more than a year on from its inception, the company is announcing a sizeable seed funding round from a veritable who’s who from the angel investment world.

The funding has in fact dripped in over a couple of tranches since its incorporation in June last year, but in total the round amounts to around $10.5 million, with institutional backers including Decibel, OSS Capital, Uncorrelated Ventures and Together.fund. The angel side, meanwhile, includes YouTube co-founder Chad Hurley; WordPress creator Matt Mullenweg; RedHat co-founder Bob Young; early Google investor Ram Shriram; and founders from Cloudera, CockroachDB, PipeDream, Talend, AngelList, BrightRoll and Freshworks.

The story so far

The genesis of NocoDB can be traced back to 2017, when Rudrappa was working on a related open source database “passion project” under a different name, one that was purely a backend with no user interface at all. The problem he was trying to solve involved creating APIs to access a MySQL database of U.K. real estate data — something that wasn’t easy to achieve.

“I realized that the fundamental problem of making a database API-accessible still remained unsolved,” Rudrappa said. “So, I built a prototype, released it on GitHub, and the next morning woke up to see a thousand GitHub stars for my project. The problem was much more widespread than I had imagined and my initial prototype had struck a chord with the users. This hobby project received a quarter of a million downloads, then I decided to team up with a friend and started building NocoDB.”

When NocoDB arrived on GitHub last year, Rudrappa said that it garnered more than a million downloads within the first 10 weeks.

“Live production data stores, like MySQL or Snowflake, are intimidating for business users, or even to developers who aren’t used to working with the backend tech stack,” he said. “But they need access to this data in order to build useful applications quickly. NocoDB makes it possible to connect any organizational data source to the universally well-understood spreadsheet interface, allowing users with zero coding experience to build workflows and automations that work in concert with real business data.”

With $10.5 million in the bank, and the support of some of the biggest names from the technology sphere, NocoDB is well-positioned to build out a commercial component to the main open source project. This includes a new premium incarnation that’s currently in private beta, one that allows companies to connect to Oracle Database and Snowflake.

“This commercial version is a request from the customer side, as they need a working contract with us when they use the software,” Rudrappa explained. “Enterprise customers need different support, and we want to accommodate that while also balancing the needs of our open source community.”

On top of that, NocoDB is also working on a managed and hosted cloud version, replete with enterprise-grade features including connectors, single sign-on (SSO), access control, auditing and more.