The publishing industry is in a weird spot. On one hand, you see Stephen King testifying against the controversial merger between Penguin Random House and Simon & Schuster, declaring that the looming deal would turn the publishing industry into an impenetrable monolith. On the other hand, TikTok’s community of book lovers — known as “BookTok” — is pushing six-year-old novels onto the New York Times bestseller list and turning self-published authors into stars. Publishing may be a mess, but at least reading is trendy.

Still, one thing remains forever stable in the world of books: It’s difficult to figure out what to read next. Tertulia, the new app from Artsy co-founder Sebastian Cwilich, is trying to fix that.

A number of companies have sprung up in recent years to solve the problem of book discovery. There’s Folio, an online bookstore with Gen Z flair; StoryGraph, a Goodreads alternative for people who hate Amazon as much as they love to read; or Copper, a social media platform that helps authors connect with their readers. Tertulia also falls into the category of “apps to replace Goodreads since Amazon has barely updated it in almost 10 years,” but it differentiates itself by using machine learning to scan online discussions to see what books people are talking about.

“The way people actually discover books is through this wide variety of sources. You hear about some book from a friend, you see something on Instagram or TikTok, you read about a book award, or you hear a podcast …” Cwilich told TechCrunch. “What if you could have all of the world’s book conversations in one place?” 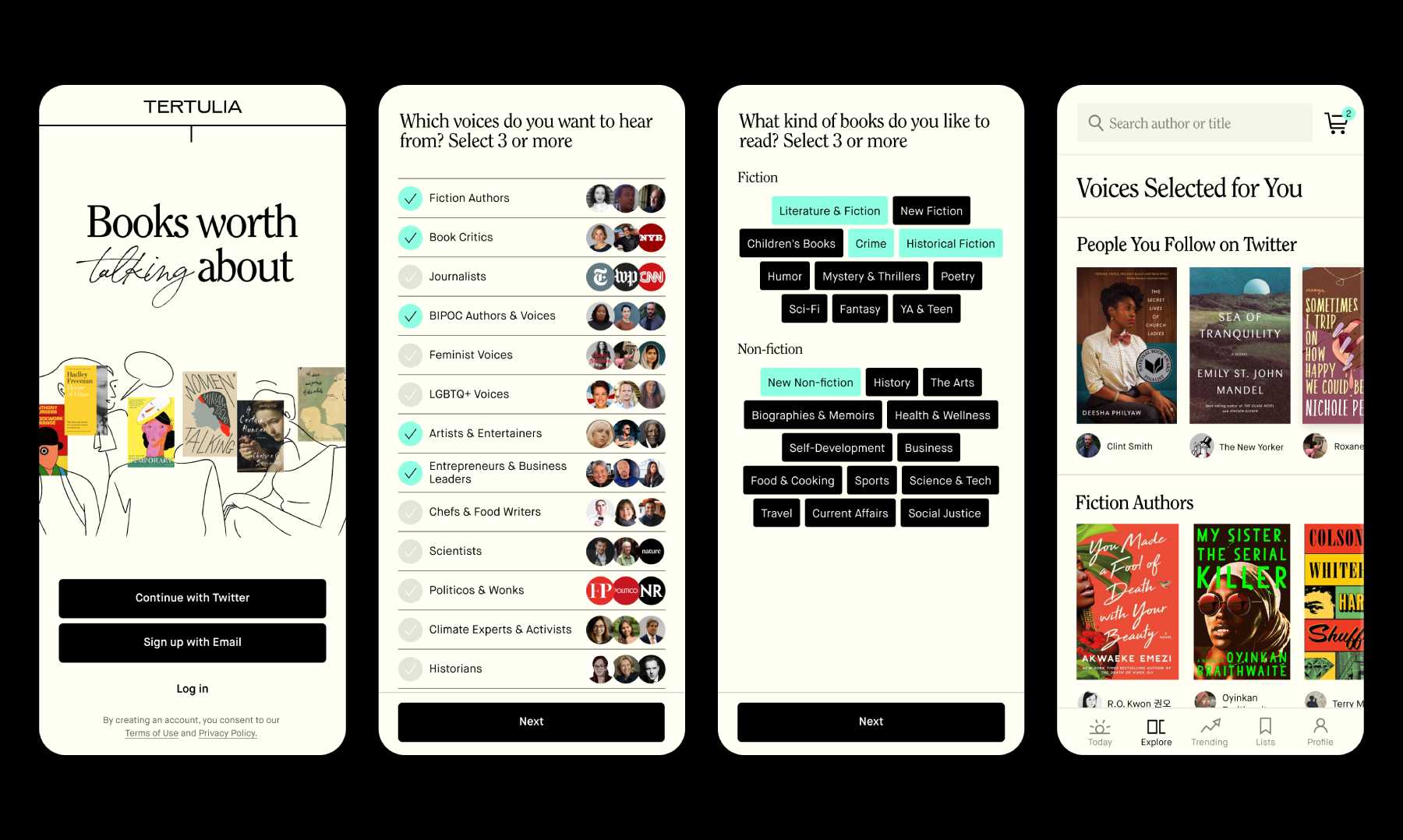 Tertulia uses artificial intelligence and machine learning to scan conversations on Twitter, as well as articles about books, to see what people are talking about. Like other social-facing startups, Tertulia is first building with Twitter, since the platform’s API is more permissive. In the future, Cwilich hopes to advance Tertulia’s technology enough to scan communities on other social networks like TikTok, too.

“The AI pipelines … it’s a pretty complex problem to take a conversation and figure out if it’s book-related or if someone is talking about the Constitution, and not a book that happens to be called ‘The Constitution,’ of which there are many,” said Cwilich. This tech is also supplemented by human curation.

Cwilich is from Argentina, so he chose to hire and build a 13-person engineering and data science team in Buenos Aires.

“Doing my tech standups with everyone drinking maté, talking in Spanish … It’s just amazing. It makes me smile,” Cwilich said. He lives in New York, as does fellow co-founder Lynda Hammes, the former publisher of Foreign Affairs magazine. The third co-founder, former Artsy head of product and design Robert Lenne, lives in Sweden.

So far on the user end, it seems that Tertulia’s AI is working relatively well. When you join the app, you can specify what kinds of books you want to read, and what kinds of people you want to hear from, like book critics, journalists, celebrities, scientists, entrepreneurs, athletes or entertainers. Then, the app will serve you daily recommendations tailored to your interests, which improve the more you engage with books on the app. As someone who reads a lot of contemporary fiction, Tertulia recommended me “Our Wives Under the Sea” by Julia Armfield and “All This Could Be Different” by Sarah Thankam Mathews, two critically acclaimed books that I had not previously encountered. You can also see the overall trending books, listed in order of relevance — right now, “Severance” author Ling Ma’s short story collection “Bliss Montage” is holding steady at the top of the list.

“It’s almost like a bestseller list, but the currency is word of mouth and buzz, rather than book sales,” said Cwilich.

Sometimes, older books will trend because they’ve resurfaced in the news cycle. Right now, Toni Morrison’s classic “Beloved” is trending on Tertulia, since the New York Public Library is offering unlimited, instant digital access to the book through the end of October. “On the Road” by Jack Kerouac is also trending, since it would have been the Beat writer’s 100th birthday recently. Of course, brand new releases like “Little Fires Everywhere” author Celeste Ng’s “Our Missing Hearts” are also getting love on Tertulia. 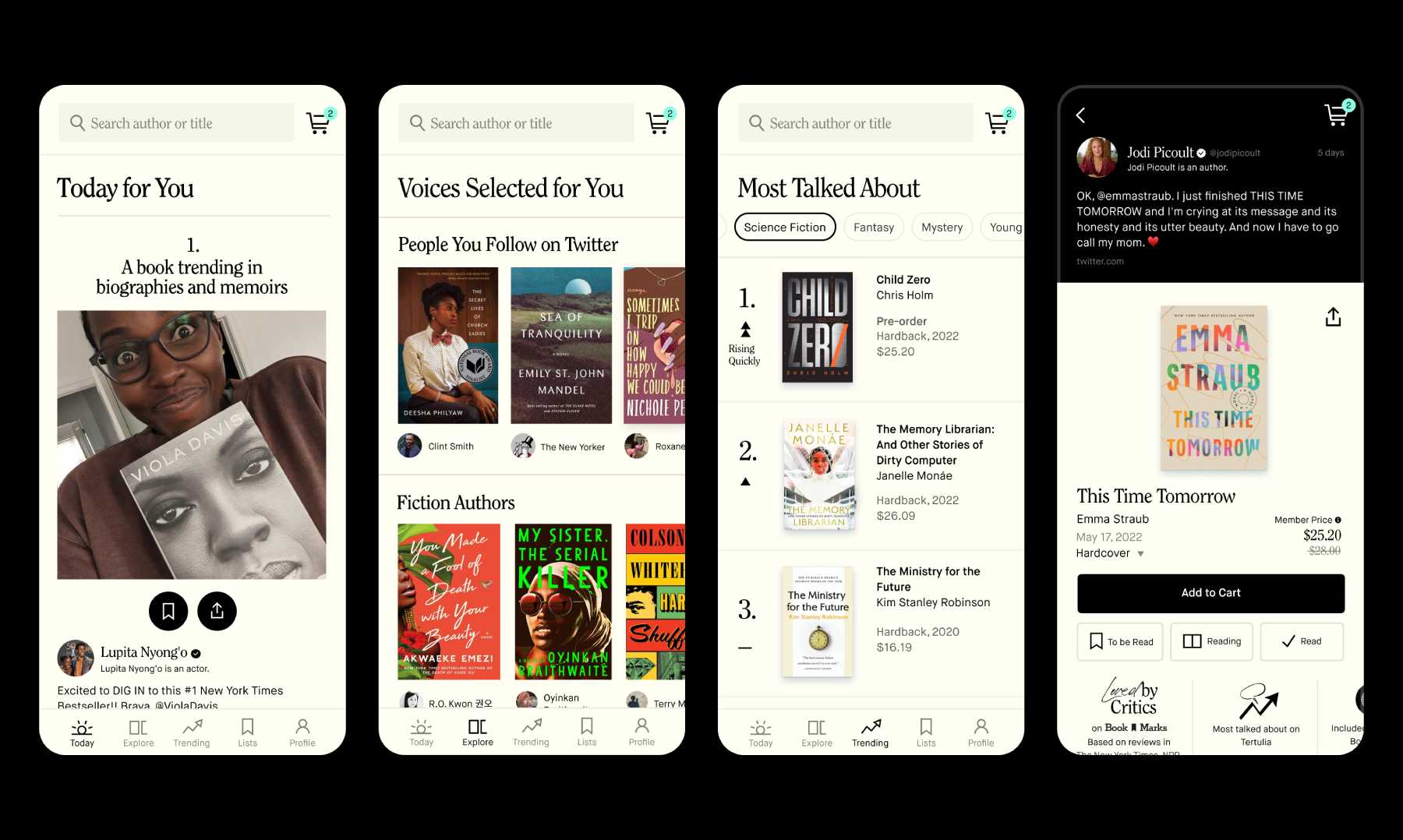 From a business standpoint, one of Tertulia’s greatest assets is its partnership with Ingram Content Group, one of the largest wholesale book distributors in the world. John Ingram, the company’s former CEO, is an investor and board member of Tertulia. With Ingram as a strategic partner, Tertulia isn’t just a recommendation tool — consumers can buy books directly on the Tertulia app, which are then fulfilled by Ingram.

Cwilich declined to share sales or user figures, but he said that Tertulia’s average order value skews up to 50% higher than the industry average.

So far, Tertulia has raised over $6 million in seed funding, led by AlleyCorp. Other investors include EarthLink founder Sky Dayton, MTV founder and iHeartMedia CEO Bob Pittman, Shutterstock founder Jon Oringer and several others. The app is currently available for iOS.