Trade wars, military conflicts, the rise of e-commerce and sustainability concerns are driving changes to supply chain networks and trade flows. Seventy-four percent of supply chain companies made changes to their networks within the past two years, according to Gartner. And in an IBM survey, 40% of executives stressed the need for spare capacity to weather future crises.

Evan Smith believes that a key part of solving supply chain stability must involve enabling stakeholders, including businesses and governments, to build trust through a shared source of truth on the global supply chain. To that end, he’s one of the co-founders of Altana, a startup using AI to sift through data points across the supply chain to spot anomalies and identify potential risks and bad actors.

TechCrunch had a conversation with Smith around the closure of Altana’ $100 million Series B round, led by Activate Capital with participation from OMERS Ventures, Prologis Ventures, Reefknot Investments, Four More Capital, GV (formerly Google Ventures), Amadeus Capital, Floating Point and Ridgeline Partners. Bringing the startup’s total raised to $123 million, it comes as Altana partners with Maersk to provide the ability to track shipments so they comply with legislation, including the U.S. import ban on goods produced by forced labor, which came into effect in June.

“Many of the world’s most pressing challenges involve correcting the failures and side effects of the globalization of the last 75 years,” Smith told TechCrunch in an email interview. “Altana is addressing these challenges by enabling governments, logistics providers and enterprises to build a more resilient, secure, inclusive and sustainable globalization defined by trusted networks.”

Altana was founded by Smith, Raphael Tehranian, Peter Swartz and Alan Bersin in December 2018. Prior to Altana, Smith, Tehranian and Swartz were with Panjiva, a global trade data company, which S&P acquired in 2018. Bersin was assistant secretary in the office of policy at the U.S. Department of Homeland Security during the Obama administration and previously served as commissioner of U.S. Customs and Border Protection.

Smith claims that what makes Altana unique is the aforementioned analyses of the supply chain, powered by a “hub-and-spoke” AI system that connects to and learns from logistics and business-to-business data. The platform draws on customs authorities, logistics providers and enterprises, creating a shared view of supply chain networks ostensibly without pooling or exposing sensitive data.

For example, one of Altana’s features identifies senders and receivers on shipments, classifies the goods inside of boxes and shipping containers, and provides a shipment rating for customs compliance and security purposes. It also answers general questions about the products, shipments, companies and networks involved. 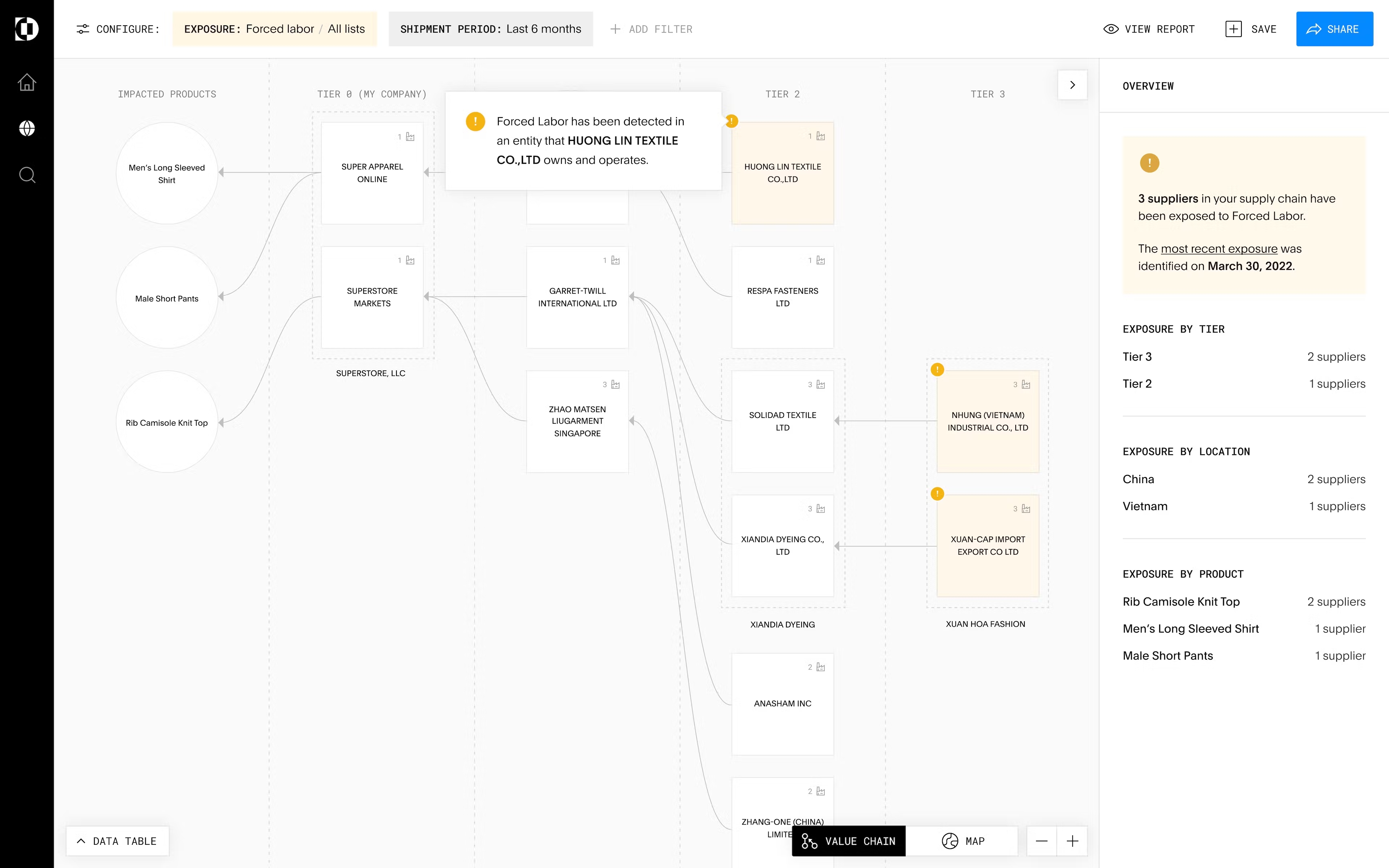 “[Our model] allows for ‘shared intelligence’ without sharing data — gleaning insights from the network while protecting the confidentiality of the data from participants like governments and businesses,” Smith explained. “In each deployment, we connect user data to our living model of the global supply chain and business network. [Altana] generates learnings from the combined data, which are shared across the network, while the underlying user data never leaves each federated, single-tenant environment.”

Beyond Maersk, Altana has worked with organizations including the Royal United Services Institute (RUSI), a U.K. military and defense think tank, to reveal Russia’s sourcing of Western components to operate weapons systems during the country’s invasion of Ukraine. Altana also recently demonstrated how its system could be used to trace the pathways through which Uyghur forced labor enters the global economy.

Smith argues that the need for businesses to understand, have visibility into and navigate the global supply chain is more pertinent than ever — and that businesses are recognizing this, driving Altana’s growth. For example, 18% of supply chain firms told Gartner in July that they were conducting climate change risk assessments, using tools including geospatial analysis, drones and AI-driven ecological simulations.

Altana has 20 customers at present, including brands like UPS and several undisclosed government agencies.

“Laws like the Uyghur Forced Labor Prevention Act, which is based on the ‘guilty until proven innocent’ model for any products entering the U.S. from China, puts enormous risk on businesses shipping goods into the U.S. And that’s just the tip of the iceberg around future legislation underway in the U.K., EU, as well as sanctions on Russia [and others],” Smith said. “The need for businesses to understand, to have visibility, and to navigate the complex global supply chain is more pertinent than ever.”

Altana, like other supply chain startups, is benefitting from a historic investment boom in the sector. VCs poured a record $58.4 billion into global supply chain tech companies in 2021, according to PitchBook. Recently, Tive, a startup developing supply chain visibility tools, raised $54 million. Supplier experience management platform HICX landed $30 million not long after, and FourKites — which helps manage global freight shipments — nabbed its own recent $30 million tranche as part of an earlier-announced, strategic partnership with FedEx.

While there are signs of trouble ahead — investment in supply chain startups was down 40% year-over-year in Q2, reflecting the down economy — Smith asserts that Altana is primed for growth in the months ahead. The company is “running at 12x to 15x growth” this year, he claimed, and plans to expand its workforce to 110 by late 2022.

“[Our] valuation has grown 8x from [our] Series A,” Smith added — declining, unfortunately, to reveal the exact figure. “The [Series B] investment will fund aggressive platform and product development to empower the world’s governments, logistics providers and businesses to build trusted supply chain networks on a shared source of truth.”