Just over a year after its debut, Amazon is discontinuing its interactive, video-calling device for kids and families, the Amazon Glow. First introduced at Amazon’s annual hardware event last year, the device promised a unique way for kids to use technology when on video calls with other family members. Instead of using only a screen, like the Echo Show or Facebook Portal (another device that didn’t fare so well), the Amazon Glow used projection technology to create a space on the tabletop it sat upon which could be used for virtual activities like games, art, puzzles and more.

Amazon must be underwhelmed with consumer response to this particular innovation, as the device had been barely given any time to find a market. The retailer had kept the Glow as an invite-only product for its first six months, before releasing it to U.S. customers in late March. That means it’s only really been available to the broader public for around six months.

Bloomberg first reported the news of the device’s discontinuation, which Amazon confirmed.

To be fair, the Amazon Glow was an experimental device that would have likely struggled to find a wide customer base, given its peculiarities. It’s an odd-shaped, upright touchscreen that requires a flat surface where it can project its images onto the table in front of it — something that may not work in everyone’s homes, where kitchen tables and countertops are often covered or cluttered and where a device wouldn’t fit in. It also required an Amazon Kids+ paid subscription.

Still, as TechCrunch’s review of the Amazon Glow noted, the experience itself was rather fun. Kid testers responded better to using the device, which is more like a toy, than they would when FaceTiming grandma through a phone or tablet. Using Glow to play games and engage in activities kept kids interested for longer periods of time during these calls, the review said.

The Amazon Glow is a somewhat buggy blast

But the Amazon Glow, as a new product, was buggy at launch and its appeal may have also been limited due to its requirement for the other user to be somewhat tech-savvy and a tablet owner.

Plus, it was designed to address a problem that arose from the pandemic, when loved ones were isolated at home, missing their family members. Because it could replicate the real-world feel of playing games and reading stories, it could serve as a stand-in for the grandparents’ (or aunts, uncles, cousins or anyone else’s) usual in-person visits. But the locked-down days of the pandemic are now behind us, which could have impacted the Glow’s ability to find traction.

Amazon declined to provide sales figures for the device when reached for comment, but Bloomberg reported sales were “slow.”

A company spokesperson offered TechCrunch a statement that seemed to imply consumers didn’t see the value in the product.

“At Amazon, we think big, experiment, and invest in new ideas to delight customers. We also continually evaluate the progress and potential of our products to deliver customer value, and we regularly make adjustments based on those assessments,” the spokesperson said. “We will be sharing updates and guidance with Glow customers soon.”

The Glow is hardly the first experimental product Amazon has killed off over the years, as the company regularly tests its hardware ideas. The company has also killed off devices like its Cloud Cam, fashion-focused Echo Look smart speaker and camera, smart ring, Dash buttons and more.

Here is the email Amazon Glow owners are receiving to alert them to the closure, offering more detail about the next steps. The email comes from the address  store-news@amazon.com and informs them Amazon will fully refund their purchase of Glow and any accessories: 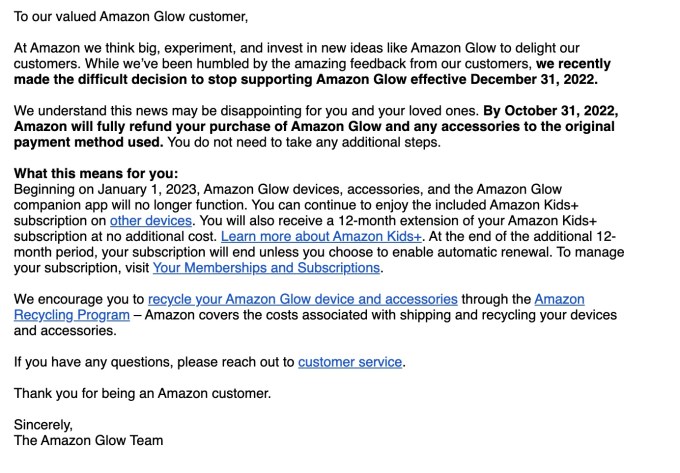