Macroeconomic factors are placing pressure on companies to improve efficiency, and on employees and their managers to do more with less. Amidst all the challenges and tribulations, workers believe a large portion of their work week is unproductive, with the majority of respondents to a recent (2018) Intuit survey saying that they’d get more done with fewer meetings, for one — and with more sleep.

That’s not great news for employers. But Pete Christothoulou, the co-founder of Xembly, believes that AI can affect change, here — specifically AI advances in the fields of natural language processing and machine learning.

“AI could finally enable a new form of software and interaction model that modernizes the workplace,” Christothoulou told TechCrunch in an email interview. “We’re at the beginning of ‘mega-shifts’ that unlock automation. Until now, AI innovations have been directed to consumer-driven or back-office enterprise functions. But we can finally offer workers personalized, conversational support wherever they may be — in Slack, on email, shadowing them in meetings — ready to do whatever they need, on command.”

This kind of ambient workplace intelligence is what Christothoulou hopes to realize with Xembly, which taps AI to analyze conversations across meetings, Slack and email and detect the intention behind them to help workers accomplish tasks. Christothoulou co-launched the startup with Peter Francis and Jason Flaks, a founding member of Microsoft’s Kinect and HoloLens teams who helped drive their natural language and speech recognition efforts. Francis previously led global growth for Qualtrics.

“Xembly … automates the tasks that bog down workers, and frees them up to focus on high-value work,” Christothoulou said.

Xembly uses an array of algorithms to tackle scheduling, automated note-taking and more, all of which can be kicked off via a conversational AI agent. The platform’s note-taking machine learning pipeline can extract action items and summarize key moments of a meeting, Christothoulou says, thanks to a model trained on a dataset of corporate meetings. After a meeting, Xembly sends a summary with the aforementioned action items that can be shared with attendees and optionally schedules focus time to work on the items, or pencils in follow-up meetings. The list goes on. 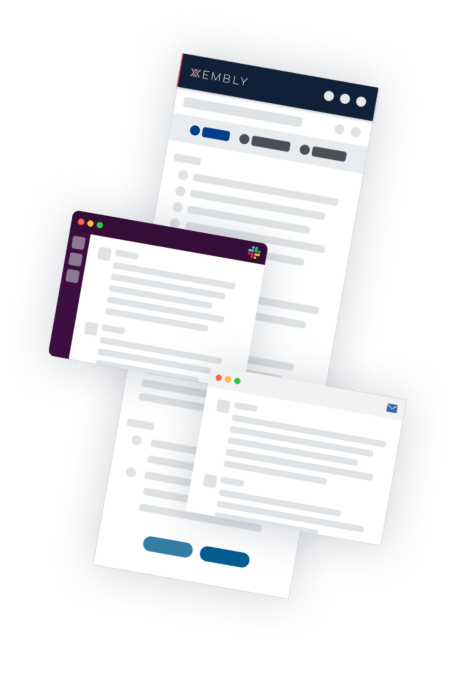 Lest workers be concerned that Xembly doesn’t afford them enough privacy as workplace surveillance software becomes the norm, Christothoulou says that Xembly can be configured to delete items immediately after it processes them.

The list goes on. But perhaps the most formidable threat to Xembly is voice transcription app Otter, which in March released an automatic outline feature to create meeting summaries and a panel to capture action items, decisions and key moments from meetings. That sounds a lot like Xembly’s core feature set, but Christothoulou makes the case that Xembly unifies the various capabilities that rivals offer in a way that’s differentiated.

“Our competitors are focused on specific point solutions like scheduling, meeting notes, task management, to-do lists and meeting feedback,” Christothoulou said. “Xembly is focused on bringing those disparate work streams together, into one conversational platform that works proactively to set you up for success.”

With early users including teams at Convoy, Unearth Technologies and Headway, Christothoulou says that Xembly is currently investing the bulk of its efforts in improving the platform’s AI capabilities and acquiring new customers. Arising from its AI R&D so far, several upgrades to Xembly have rolled out since June, the month the service launched, including recommendations to optimize workers’ schedules and reminders to accomplish tasks or schedule meetings.

“Xembly was born amid the pandemic, right as it was fundamentally changing the way we work. Xembly has helped workers adapt to new remote work challenges, and will continue to help make teams more productive,” Christothoulou said. “We’re in a position to see strong and responsible growth as we continue to scale our product and user base.”

If 25-employee Xembly — which doesn’t charge at present — can convince companies that their workers will be more productive with its AI-powered assistance, it just might fulfill those last promises.