The European Parliament has voted overwhelmingly to back EU legislation that will standardize mobile chargers on USB Type-C — paving the way for the law to start being applied by the end of 2024.

MEPs have been pushing for the e-waste measure for over a decade so today’s massively affirmative plenary vote — of 602 in favour of the directive and just 13 against (plus eight abstentions) — is hardly a shock.

The directive isn’t quite law yet. It still needs final approval by the Council — but that step is considered a formality given the provisional political agreement already reached between the co-legislators this summer.

Once the Council has signed off, the directive will enter into force 20 days after publication in the EU’s Official Journal and Member states will then have 12 months to transpose the rules — and 12 months after the transposition period ends to apply them. So it looks set to start to bite towards the end of 2024 — when all mobile phones, tablets and cameras sold in the EU will have to be equipped with a USB Type-C charging port.

After that, there’s a second deadline — of spring 2026 — when the obligation will extend to laptops.

Products placed onto the EU’s market before the date of the directive’s application won’t fall in scope — so we’ll have to see whether there’s a scramble by manufacturers to flush out existing non-USB-C regional inventory by dumping it onto the market ahead of the 2024 deadline.

There will also be plenty of eyes on what iPhone maker Apple does — and how quickly it moves to adopt USB-C across its suite of mobiles — given it’s been such a stickler for its proprietary smartphone charging standard (and all the dongles it can sell around the Lightning port).

“Regardless of their manufacturer, all new mobile phones, tablets, digital cameras, headphones and headsets, handheld videogame consoles and portable speakers, e-readers, keyboards, mice, portable navigation systems, earbuds and laptops that are rechargeable via a wired cable, operating with a power delivery of up to 100 Watts, will have to be equipped with a USB Type-C port,” the parliament writes in a press release.

“All devices that support fast charging will now have the same charging speed, allowing users to charge their devices at the same speed with any compatible charger.”

The EU expects the common charger obligations to drive greater re-use of chargers — reducing the environmental impact of consumer electronics purchases while helping buyers save up to €250 million a year on unnecessary charger purchases. 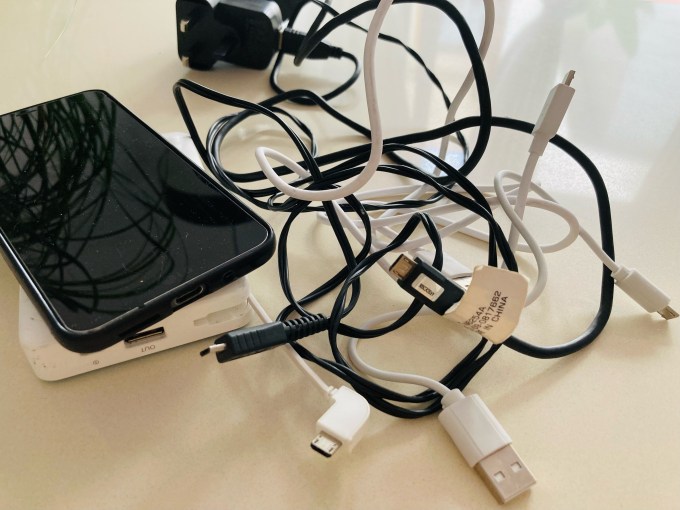 Another component of the directive requires device makers to apply dedicated labels that inform consumers about the charging characteristics of new devices, with the aim of making it easier for them to see whether their existing chargers are compatible.

The idea for the label requirement is so consumers can make an informed choice about whether or not to purchase a new charger with a new product. However there will surely be a risk that unsure consumers will buy a new charger ‘just in case’ — generating fresh unnecessary charger e-waste — and/or be nudged to buy another charger by sharkish retailers spotting an opportunity to generate extra revenue.

Currently, on the e-waste front, disposed of and unused chargers annually account for about 11,000 tonnes of e-waste in the EU, per the Commission. So it will be interesting to see whether/is there’s a real terms cut in e-waste resulting from the directive or more complex impacts.

Increased interoperability between different gizmos might actually increase consumption of portable electronics by creating more demand linked to expanded utility. But we can probably all agree that unused chargers that spend their lives untouched and box-fresh before being binned are a particularly sad kind of e-waste.

Europe’s push for a common charger is creating some reflective pull elsewhere.

This summer, a trio of US lawmakers seized on the EU directive to press for America to follow suit and adopt a USB-C common charger standard by 2024.