In the latest quick commerce headspinner, Deliveroo is experimenting with expanding its rapid grocery business by opening a new type of ‘dark store’ in Central London.

As well as functioning as a mini warehouse where Deliveroo staff pick orders for couriers operating on its platform to collect and deliver locally to app users, the new New Oxford Street “Deliveroo HOP” outlet — which stocks a range of groceries from partner supermarket Morrisons — functions as a pick up point for shoppers who’ve ordered groceries in Deliveroo’s app.

But a bigger difference is that non-app users can also walk into a reception area to use a digital kiosk and make an order for groceries directly in-store. They then wait “minutes” to be handed a bag containing their chosen groceries, rather than picking the items off shelves themselves. So basically — if you’re a Brit — it’s like the Argos catalogue retailer model (an innovation dating back to the 1970s) but for lunch and dinner.

Notably, there is no consumer access to the shelves of the Deliveroo HOP store so — at a push — the approach harks back to the traditional grocery store model where a customer would step up to a counter set in front of lots of jars and tins to order quantities of items and the grocery would themselves weight and bag in the moment.

Except of course there’s no weighing and bagging going on as that would erode the convenience claim; rather the inventory consists of 1,750+ grocery items, from Morrisons ‘Ready to Eat’ and ‘The Best’ ranges (so it’s just the usual pre-packaged consumer goods you’re being handed in a bag by a staffer who’s had no say in what the outlet stocks).

Deliveroo describes the new New Oxford Street store as offering customers “a new way to shop” — suggesting the “rapid grocery service” will meet demand from busier Londoners wanting to walk in pick up a few bits for lunch in person or to buy ingredients for their evening meal by placing an order in its app and collecting it on their way home.

It’s not clear how long many minutes exactly consumers have to hang around if they make an in-store order waiting for it to be picked and handed to them. We’ve asked.

We’ve also asked for confirmation of where payments are made (i.e. via the kiosk itself as the point of ordering, assuming you can make an order without needing to have a Deliveroo account; and/or via a Deliveroo account linked to a credit card, i.e. if there’s a convenient and secure way for the kiosk to identify an app user so their card can be charged). Update: We’re told the kiosks will be card payments only.

Paying in the store (assuming that’s possible for kiosk shoppers) will obviously add to the ‘minutes’ involved in the shopping experience. 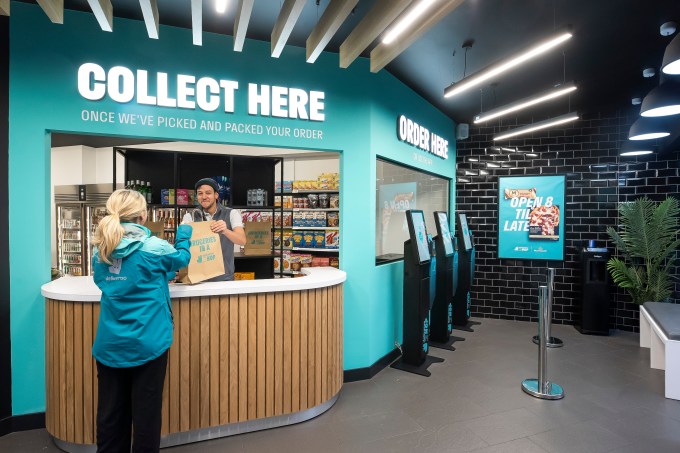 Shopping on a kiosk is clearly not going to be the most convenient experience if you have a lot of items to order — or there’s a long queue of people waiting to grease up the screen — so the majority of Deliveroo HOP store activity will surely remain in-app (not in-store) ordering.

Dark stores in cities across Europe, including in France, the Netherlands and Spain, have faced local anger with neighbors complaining about noise, pollution and traffic. Another concern is that the dark store concept hollows out vibrant local high streets by replacing accessible and interesting shops and spaces with blank fronted, inaccessible warehouses.

In France — one of the markets where Deliveroo’s business remains active — national lawmakers are now responding to complaints by clamping down on dark stores: Last month the BBC reported that president Emmanuel Macron’s government has decreed dark stores will be classified as warehouses, rather than shops — a move it suggested will mean most being forced to close (at least where there is opposition to press local mayors to act).

U.K. lawmakers do not appear to be contemplating similar moves — certainly not under the current government (which is ideologically aligned with deregulation) — but it will be interesting to see whether Deliveroo launches this ‘slightly less dark’ store concept in other markets where quick commerce is facing regulatory threats to the decentralized, ‘micro warehouse’ model.

French lawmakers may find ways to word the incoming planning law update so it would still outlaw a shop that largely functions as a warehouse. But it remains to see how the decree is drafted — and Deliveroo may be hoping that a concession of letting shoppers enter dark stores is enough to circumvent outright bans.

Given a lot of local concern around dark stores is focused on the noise and pollution generated by 24/7 delivery traffic it’s also worth noting that the New Oxford HOP store’s opening hours are stated as 08:00-23:00.

We asked Deliveroo if it plans to launch Hop stores in any other U.K. cities or in markets like France. A spokeswoman told us the business is not currently in a position to say — but added:  “Deliveroo is always looking for ways to serve customers in the best possible ways.”

The startup’s original focus was on speedy restaurant meal delivery but it kicked off its rapid grocery delivery service, aka Deliveroo HOP, back in September 2021 — at a time when pandemic-triggered demand for online grocery shopping was riding high.

The service now operates across 16 sites in the U.K., France, Italy, Hong Kong and the UAE, where it loops in a range of supermarket partners to supply inventory in different cities and markets. It also offers a B2B ‘HOP as a service’ offering targeted at grocery partners so they can use its expertise to offer rapid delivery from their existing stores.

After the pandemic-fuelled boom in app-based shopping, quick commerce players have been facing a challenging time as the world emerged from lockdowns and especially since the global economic downturn gobbled up the quick money they’d had such ample access to a few years ago.