There’s a lot of chatter right now about the “surprise” shutdown of Stadia, Google’s game-streaming service. While it’s true that rivals like Geforce Now and Xbox Cloud Gaming presented entrenched competition and that Google knows next to nothing about gaming, the main trouble — as with most of its products these days — is that no one trusted them to keep it alive longer than a year or two.

It really is that simple: No one trusts Google. It has exhibited such poor understanding of what people want, need and will pay for that at this point, people are wary of investing in even its more popular products.

The technical implementation certainly wasn’t to be faulted. I will admit to being a skeptic when they said they could hit the frame rates and response times they advertised, but by Jove they did it. At its best, Stadia was better than its competitors and almost magical in how it fulfilled the promise of going from zero to in-game in one second.

The business side of things was never quite so inspiring. There is now a great remembering of the much-mocked pre-launch hype display for Stadia: the doomed Dreamcast, pointless Power Glove and E.T. for Atari, the game so bad they buried it in a shallow grave, followed by an empty pedestal on which Stadia would soon sit.

No clue where this is going but I'm intrigued #GoogleGDC19 pic.twitter.com/HOSKJNMXbb

Though it’s clear this was a hilarious misunderstanding of … just about everything, it turned out to be quite apropos. Stadia was doomed, pointless and destined for an undignified death.

The last first; it was only two months ago that Stadia’s Twitter account assured a concerned user that the service was not in fact shutting down. 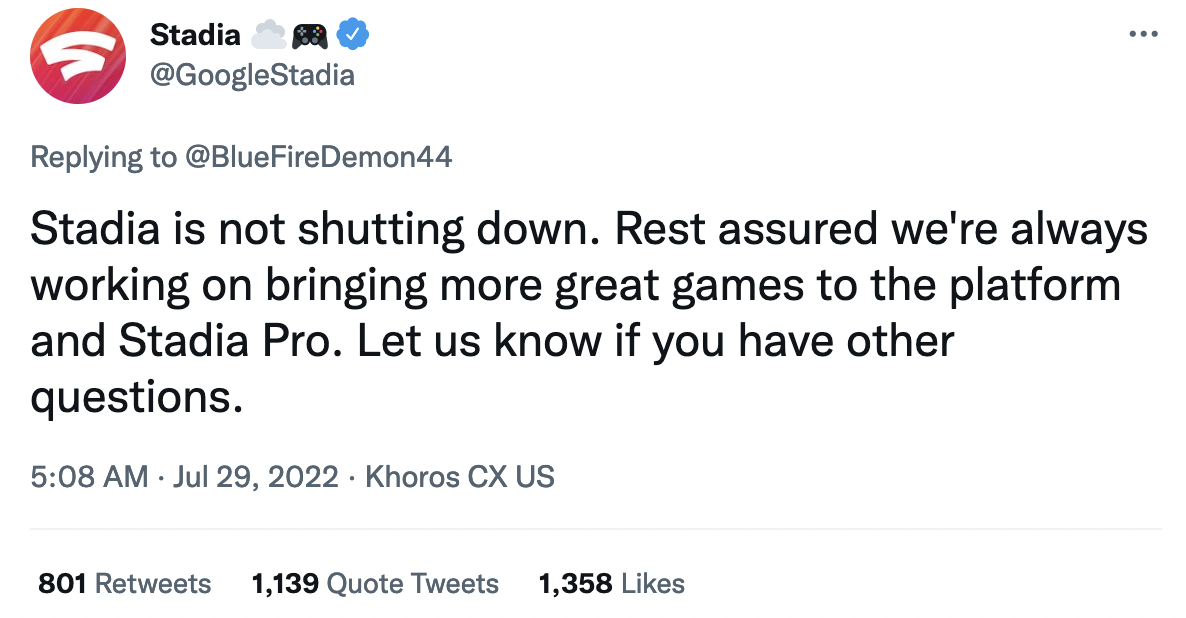 In fact the wheels were probably already in motion, but the higher-ups just hadn’t yet told their social team, developers or pretty much anybody this was the plan. It has been reported that a lot of people close to the service were blindsided by the decision — and who wouldn’t be, after the company publicly declared that everything was fine?

For some the writing was on the wall earlier, when the first-party development team put together by Google to create exclusive games was shut down before it got a chance to do just about anything. The company may have miscalculated how long it takes to develop a game from scratch. At least as long as a Google Doodle.

Still, it could have succeeded even without exclusives if it offered a compelling product. Unfortunately Google Stadia was as pointless and showy as the Power Glove: “It’s so bad,” as the meme has it.

As impressive as its execution was, I couldn’t quite figure out who it was for. A huge, huge proportion of gamers who want to play the latest hit, say Deathloop, will already have either a console, a gaming PC or both. Why would I buy Deathloop for Stadia instead of for my PS5 or on Steam? It will play and look better natively (though Stadia did look surprisingly good), and of course they’ve already invested hundreds into those platforms.

Sure, you could play on the go or on your laptop or something. But … not only do services to do that already exist, but the experience isn’t really great. Full-price games these days are immersive, major affairs where you sit down for an hour or two on the couch and get into it with the surround sound system blasting. Sure, I wouldn’t mind doing a little inventory management on my laptop during a coffee break at the office, but beyond that, having persistent access to AAA games isn’t much of an advantage.

Meanwhile games like Genshin Impact hit AAA levels and are natively portable — played by millions on phones. Again, why was Stadia a better deal?

It might have made sense if the proposal was you pay $20 a month and some Google sorcery let you play your PlayStation, Xbox, Switch or PC games all wherever you want. A real platform-agnostic bridge builder type thing, and Google would probably be paying millions behind the scenes for the privilege. Kind of like what Samsung is attempting:

But no. You couldn’t access your existing games — couldn’t even use your own controller! It cost you a bill to get in the door plus the monthly fee, then you had to buy games on top of that, full price.

And here’s where it was really doomed. Because while people will happily drop a couple bucks here and there for a Google service, no one is going to pay hundreds for something they have a sneaking feeling is going to be completely worthless in short order.

Google’s legacy of killing products is infamous. Its twists and turns on priorities, branding, standards and everything else have made it clear to everyone that they cannot be trusted with anything beyond their core services, and they even like to screw those up now and then.

I still have my original Super Nintendo, which plays as well as it did the day I brought it home. My Mario Kart and Super Metroid cartridges have been working for … my god, 30 years now. I have games on Steam I bought a decade and more ago that I can load up and play as easily as I did then. There are digital copies of games on my PS3 that would boot right up if I felt like digging it out of storage. These companies and services have built trust over decades to show that they either can’t or won’t pull the rug out from under their customers.

Why do you think the whole P.T. drama was so disturbing? It was truly unexpected: An aggressive and unnecessary destruction of a digital product that people thought they owned. Gamers felt a betrayal.

But with Google the shoe is on the other foot. Google has built nothing but mistrust, outside a handful of products no one wants or needs to change. For me (and dozens more of us) the turning point was the assassination of Google Reader — for which I will never forgive them, and try to regularly exert a small vengeance by mentioning it like so — but plenty of other products have been extended, embraced and then extinguished (to repurpose the idiom).

Google couldn’t betray me now if they tried — because there’s nothing to betray. To be honest I would be relieved if they screwed up Gmail so badly that I had no choice but to switch — I can’t work up the volition otherwise.

And although there is no doubt that the people for whom Stadia did make sense for whatever reason (and I was happy for them) do feel betrayed, the millions more who squinted and smiled and said “not this time, big G!” are feeling validated. I will say that I’m surprised Google is doing the right thing by offering a truly robust refund. It’s the least they could do, and god knows they have the money.

I don’t think Stadia could ever really have been a success. Its entire model was probably doomed to failure from the start. But even a long shot can be molded into a successful product with a few pivots if the core is solid and it develops a large, invested community. That was never, ever going to be the case for Stadia. Google has built a case against itself so strong that, whether it’s creators on YouTube, coders and scientists on Colab, or media and advertisers in Search, no community will ever truly trust it again.