Doccla, a Sweden founded but London-headquartered health tech startup that sells a remote patient monitoring platform to hospitals to run so-called ‘virtual wards’, has closed a £15 million (~$17M) Series A funding round a year after raising a $3.3M seed.

The Series A is led by US VC General Catalyst, with participation from funds managed by healthcare investors KHP Ventures (a collaboration between King’s College London, King’s College Hospital NHS Foundation Trust, and Guy’s and St Thomas’ NHS Foundation Trust). Existing investors Giant Ventures, who led the seed round, and Speedinvest also backed the Series A — which sees Chris Bischoff, MD at General Catalyst, joining the board.

General Catalyst is an investor in US remote care health tech unicorn Cadence which also sells a remote monitoring service, so could be seen as a potential competitor to Doccla. Although the (currently) different target markets (US vs Europe) and specific product presentation — we understand Cadence is focused on populations with chronic disease, while Doccla talks in terms of building virtual wards/’Hospital at Home’ — are, evidently, distinct enough to convince the VC firm there’s value in backing both for growth.

Doccla’s growth trajectory must certainly have helped: The 2019-founded startup only launched its remote patient monitoring service during the pandemic but says it’s now present in a fifth (20%) of all Integrated Care Systems (ICS) in the UK, with patient intake from 20+ hospitals. In total it says it’s monitored 50,000+ “patient days”* to date. (NB: ICS are a feature of the UK’s National Health Service (NHS) in England — essentially partnerships between relevant organizations and local authorities with the goal of joining up the planning and delivery of health services across their region.)

The startup’s platform allows clinical staff from hospitals to monitor the vital signs of those under treatment remotely (either continuously or intermittently) — freeing up hospital beds for new patients to be admitted by enabling early discharge via at-home monitoring. That’s important because the NHS suffers from a particular low average number of beds per 1,000 people compared to other OECD EU nations, with just 2.4 beds vs the OECD EU average of 4.6 and Germany’s average of 7.9.

It sells an end-to-end remote patient monitoring service which covers provisioning the devices used for monitoring (including pre-configured smartphones with large fonts to improve accessibility for the visually impaired/frail etc; and wearable medical devices to measure a wide range of physiological parameters); and taking care of software integration, logistics and customer service, and tech support for the elderly and non-digital natives — with its pitch being that it differentiates from competitors by significantly reducing the workload on hospital staff.

Doccla says its current clients include a number of NHS trusts across the UK, including Northampton General Hospital, Cambridgeshire Community Services, and Hertfordshire Community Trust.

On the competition front, it name-checks Huma, Current Health, and Docobo as UK rivals — but co-founder Martin Ratz points to three main areas where he argues it’s serving up something “very different”.

“For starters, we are CQC [Care Quality Commission, aka the independent regulatory body for healthcare providers in England] accredited and therefore can take clinical responsibility for patients, reducing the workload for healthcare personnel,” he tells TechCrunch. “We are device agnostic and are not pushing our own device. Finally, our service layer enables us to deliver market leading patient compliance — exceeding 95% across all pathways.”

The Series A funding injection will be ploughed into further developing its tech stack to support the integration of more medical devices into its patient monitoring platform and electronic healthcare record systems; and for data analytics and AI — to “expand clinical capacity and availability” to meet demand for “virtual hospitals that alleviate pressures on healthcare systems”, as it puts it.

Or, put another way, with both beds and doctors in chronically short supply AI-powered efficiencies are the new, transformative tool to enable already stretched-to-breaking point health services to (safely) stretch even further — or that’s the claim.

“In the future, we will be able to cover additional clinical specialties, with an even more advanced level of care as well as logistical improvements of the service delivery,” suggests Ratz.

Asked what Doccla is using AI for, he confirms it’s working on developing predictive alerts that could help clinicians monitor more patients.

“Doccla will use data insights to develop automation and AI for further improvement of service delivery and clinical outcomes,” he tells us. “This will include various support tools for clinicians, such as predictive alerts.”

There are plenty of safety pitfalls here, given — for example — the bias risks around AI if training data is not representative of the patient population, so how Doccla goes about integrating automated alerts and other AI-powered support tools into its platform without compromising patient safety will certainly be one to watch. (Getting regulatory accreditation on such features will also be less straightforward, with more agencies and oversight bodies in play.)

Still, it looks important that Doccla’s investor roster includes a fund with direct links to a number of NHS Trusts. 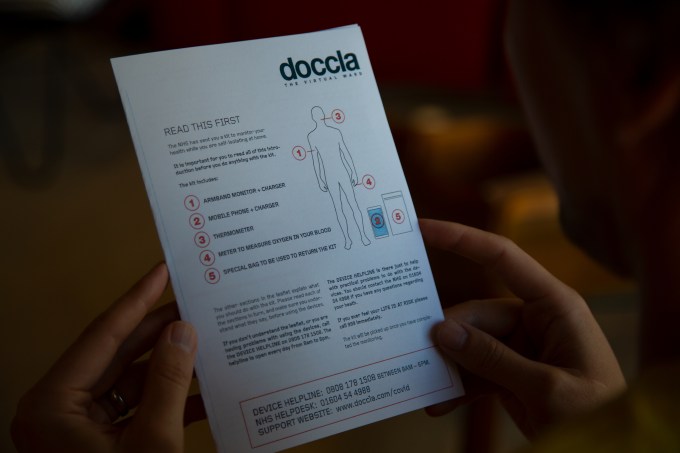 On the question of scalability, especially around patient support — which may require a lot of patient one-to-one interactions with tired and/or frail people who may not be accustomed to using connected technology — Ratz says: “Doccla places significant value on our service layer, as it’s crucial to building and scaling a virtual hospital. In particular, new models of care, especially at the intersection with behavioural change, require it. Doccla’s virtual patient support teams, as well as our clinical teams, are highly efficient and enjoy economies of scale.”

Also on the slate for the Series A: Expansion to new European markets and segments, per Ratz. But he won’t be drawn on where exactly it’s eyeing for new launches. “Doccla’s current focus is the UK where we serve a range of customers and our European expansion will be shaped by upcoming public tenders, notably those in larger markets,” he says, adding: “I can say that we’re already in dialogue with significant operators in several countries.”

The funding will also be used for fuelling the startup’s growth by running virtual clinical trials for the pharmaceutical industry, according to Ratz — presumably with the fully informed consent of any patients who agree to sign up to such trials. (Doccla’s current privacy policy states that it will not share users’ personal data — and further claims to “only collect the data that we need to deliver care safely and effectively”.)

The startup’s platform is able to serve a “very diverse range” of patients, from palliative care to pre- and post-surgery patients, says Ratz — although this type of remote care is clearly not suitable for every type of patient (even if you’re going to start throwing AI into the mix).

“The largest patient groups we work with include COPD [Chronic obstructive pulmonary disease] and heart-related health. The applicability of remote care is exceptional however some patient groups — for example, those who require in-person support such highly acute patients or people with dementia — are less suited for remote monitoring,” he says.

Commenting on the Series A funding in a statement, General Catalyst’s Bischoff added: “The virtualisation of hospital wards is a critical step in efficiently expanding health resources and enabling timely, safe transition of care into the home. Doccla has immense potential and is driving real impact by not only providing a much-needed lifeline for overwhelmed hospitals but also improving patient outcomes through remote monitoring. The founders’ vision to drive more digitally-enabled, decentralised healthcare that combines physical and virtual pathways aligns with General Catalyst’s Health Assurance thesis. Importantly, their partnership approach with NHS Trusts echoes our core values of radical collaboration and responsible innovation — innovation that improves society. At General Catalyst, we support companies that bring about powerful, positive change that endures, and we believe Martin, Dag and the team will do just that.”

* This report was updated with a correction: We originally reported that Doccla has monitored 50,000+ patients so far after but that is not correct. We had asked it how many patients it had monitored to-date — and initially believed it had provided a straight answer to our question. However we now understand its response did not specify the total number of patients — but rather referred to a metric Doccla calls “patient days” — so we have amended our reporting to reflect this. It is not clear how many patients are responsible for generating the 50,000+ ‘patient days’ it refers to since it avoided answering our question