Julio Vasconcellos Contributor
Julio Vasconcellos is the managing partner of Atlantico, a venture capital fund focused on Latin America. He was previously the founder of Canary and Peixe Urbano, and was Facebook’s first employee in Brazil.
More posts by this contributor

“Cautious optimism” is the mood among founders and investors in Latin America today, amidst an uncertain global scenario.

In this year’s Latin America Digital Transformation Report, the investment team at Atlantico chronicles how the region leaves in its rearview mirror a decade-long boom in tech value creation. Peaking with 2021’s record $16 billion in venture funding, a nearly fourfold increase from the year prior, Latin America broke through to the world stage. But even though we saw the total funding being halved this year, the region still counts on greater investment volumes than any year prior to 2021, fueling that “cautious optimism.”

The past five years saw the birth of Latin America’s first unicorns, marking a long-awaited inflection point in the digital transformation of a region with over 650 million people.

Now, with the dust of market turbulence still settling, local players are left wondering how best to play their hand: Ignoring calls for austerity could mean squandering the gains from these golden years; yet, not capitalizing on the region’s special post-pandemic position could leave much money on the table.

In recent months, we have seen the pandemic-fueled boom in tech adoption fade away in the U.S. and other developed markets. Market darlings of the pandemic period, ranging from Shopify to Peloton, have been forced to reduce headcount as usage levels revert to the pre-pandemic historical trend line.

The persistence of Latin America’s digital gains is perhaps most clearly seen through enduring gains in e-commerce penetration.

Distinctively, Latin America has not suffered through this hangover from digital adoption. Instead, a seemingly permanent two- to three-year gain can be observed in a wide range of indicators of tech adoption: E-commerce penetration, grocery delivery volumes and usage of digital banking and telemedicine all have continued to grow rapidly beyond 2020’s step-function gains. 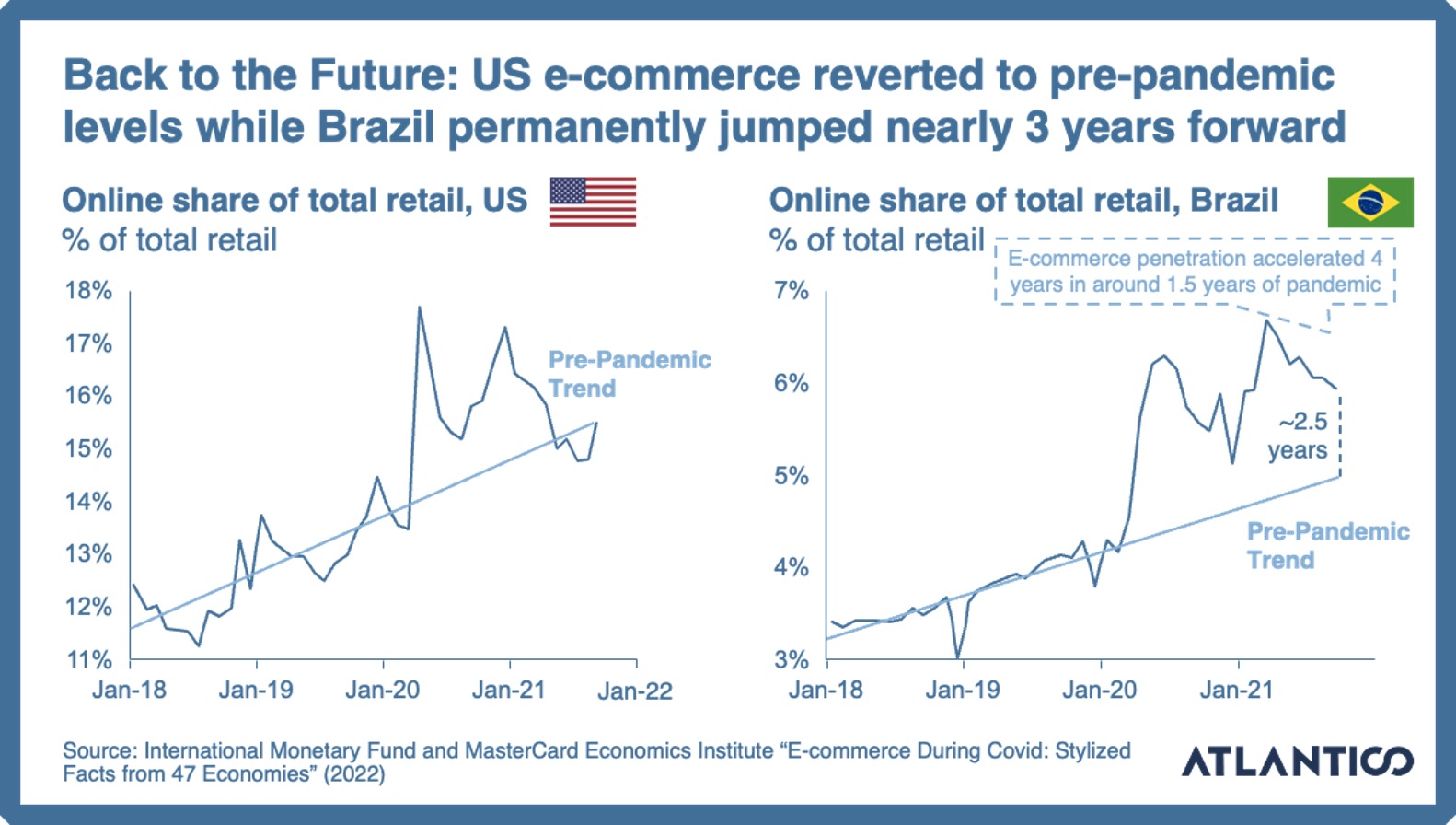 Caution in an uncertain world

Uncertainty is still the order of the day in markets across the globe as tech companies and investors try to figure out how to weather the storm. After a long period of excess liquidity and low interest rates, inflation finally showed up to the party, leading central bankers to step on the brakes.