Amazon today announced it’s bringing a new accessibility option to its new line of Fire tablets with the addition of “Tap to Alexa” functionality —  a way to interact with the company’s Alexa voice assistant without actually speaking. The feature was introduced in 2018 on the Echo Show, as a way for those with speech disabilities to interact with Alexa by tapping shortcuts on the smart device’s home screen. Now, it’s available on the newly introduced Fire HD 8 tablets, launched today.

While Amazon had bumped up the specs for its 10-inch tablets last year, the Fire HD 8 line hadn’t gotten an update since 2020. That changed with today’s introduction of four new models: Fire HD 8, Fire HD 8 Plus, Fire HD 8 Kids Pro and Fire HD 8 Kids.

The Kids tablets include subscriptions to Amazon Kids+, a service providing a curated collection of ad-free books, games, videos and apps as well as parental controls, a carrying case and a two-year guarantee on damages. Kids Pro tablets also come with access to a digital storefront where kids can ask to purchase e-books, games and apps.

The HD 8 tablets also include USB-C charging, 2GB of RAM and choices of either 32GB or 64GB storage options, expandable up to 1TB with microSD. The Plus version adds wireless charging with Qi-certified chargers, 3GB RAM, and a sharper, 5MP rear camera. 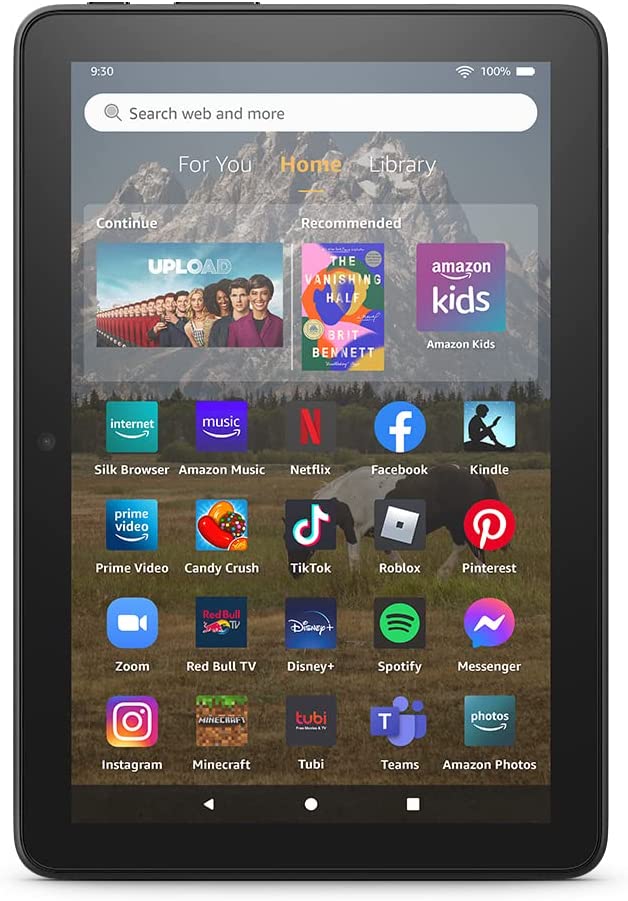 Instead of the specs, the highlight with this release is the addition of Tap to Alexa, a tool that allows consumers to use Alexa via touch. The feature had yet to be made available on Amazon tablets until today’s launch, the company says.

With Tap to Alexa, tablet owners can tap on-screen tiles to quickly access common requests, like setting an alarm, getting the weather, playing music or listening to the news, Amazon explains. Users can also create custom tiles for their most frequent interactions, like launching their favorite music, for example.

Plus, the feature can be used to create custom “Text to Speech” tiles of their most frequently used words and phrases, customized with their own icons and colors to help identify and organize them on the screen.

The company additionally noted the “Text to Speech” feature is new with the HD 8 devices, and helps those who have speech difficulties or who are nonverbal or nonspeaking. Amazon pointed to data from the American Speech-Language-Hearing Association, which found that more than 2 million people in the U.S. have expressive language disabilities and rely on augmentative and alternative communication devices to generate speech.

Another new accessibility feature included with the Fire HD 8 lineup allows customers to use a compatible Bluetooth switch to navigate and interact with their tablet, which helps those with limited mobility to use these devices. This feature works with Tap to Alexa, too.

The Fire HD 8 Kids, aimed at kids 3-7, is also available for preorder starting at $149.99 in Black with a 32GB or 54GB storage option and a Blue or Purple case that includes an adjustable kickstand that doubles as a handle. There’s also a new Disney Design bundle for the Fire HD 8 Kids featuring Mickey Mouse or Disney Princess cases for $159.99.

The Fire HD 8 Kids Pro, which is for kids 6-12, also comes with 32GB of storage at $189.99 with case options in Cyber Sky, Rainbow Universe, and Hello Teal. Both Kids tablets include a year of Amazon Kids+, normally $4.99/month.

The tablets will ship next month.