Opal, a “digital well-being assistant,” is updating its app today to help individuals better monitor and manage their screen time usage. While most screen time apps are focused on helping parents manage their children’s screen time, Opal’s goal has been to help anyone — yes, even adults — develop their own healthier habits around their use of distracting websites and apps. With its latest release, the company has rebuilt the service to now leverage Apple’s new Screen Time API to remove apps from the phone when you’re trying to focus and to display your Screen Time data in a more readable and actionable fashion.

Launched in 2020, the app’s free service has allowed users to block distractions and schedule screen time breaks throughout the day. Its paid subscription offers more granular controls — like scheduling “time off” from specific apps and establishing recurring downtime schedules for things like work or study hours, family dinners or anything else that demands your full attention, including sleeping. Opal also offered an extreme lockdown mode called “Deep Focus” which would entirely lock you out of those apps you just can’t resist. (TikTok addictions, anyone?)

To date, over 200,000 users have downloaded Opal, the company says, and have now spent over 20 million hours “focusing” using the app’s tools.

Following the launch of iOS 16, the new version of Opal is now among the first to take advantage of Apple’s new Screen Time API, announced at Apple’s Worldwide Developer Conference last year.

The API provides a way for third-party developers to create interfaces in their own apps that work with Apple’s built-in screen time tools. Its arrival follows Apple’s crackdown on the screen time app industry that had drawn questions from lawmakers in a 2020 antitrust hearing. Apple was being called out as it waited years after debuting its own built-in screen time controls in iOS before giving third-party developers access to interoperate with its services. In the meantime, it began rejecting apps that competed with its own tools claiming they were security risks, despite having previously approved them. 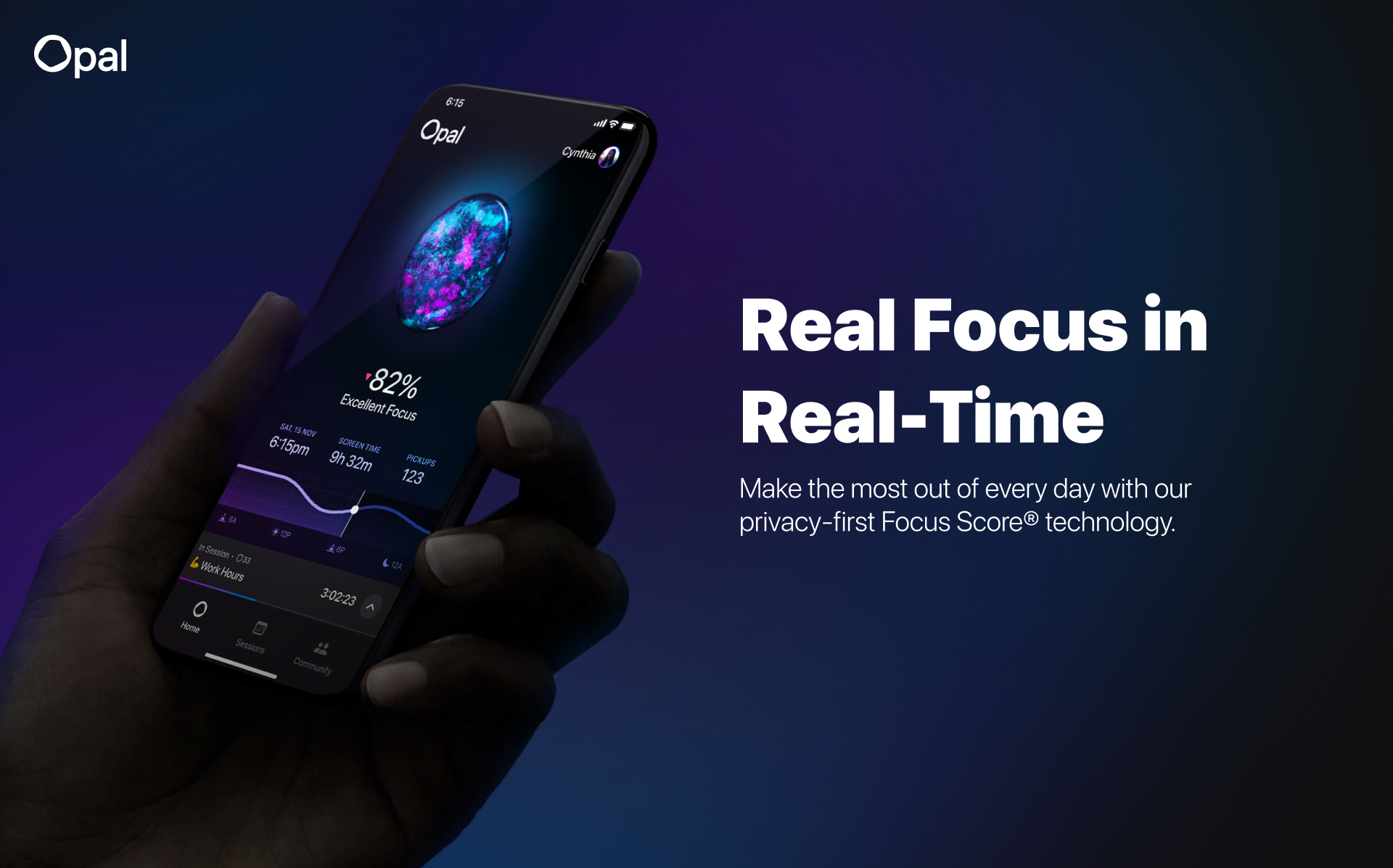 While other third-party apps have also now begun to integrate this new API — like the screen time app Grace recently did — most companies in this space tend to focus on kids’ screen time and app usage, not on adults who want to set their own individual limits, as Opal does.

With the update, Opal will introduce a free “focus report” based on your screen time data, as provided through iOS’s data. You can also keep an eye on your focus level with a feature called Focus Score, which tracks your screen-time use and measures your progress in real time.

The report is meant to be easier than having to dig pages deep into iOS Settings for similar information, as it puts actionable data front-and-center in a clear, concise Story-like format. On the report, you can quickly view metrics like your total screen time hours, the number of pickups, how focused you are during work hours, how you compare with other people like you and more.

One of the app’s more shocking metrics is how it turns Apple’s Screen Time data into an estimation of how much of your life you’ll spend looking at your phone’s screen. (We expect to see this one popping up on social media as users lament their app addictions.)

“People spend around four hours per day on their phone, starting age 12. To put this into perspective, this means that they will spend 17 years of their life staring down at a phone,” noted Kenneth Schlenker, Opal Founder and CEO, in a statement about the release. “The new Opal makes it incredibly easy to manage your screen time, be less distracted and focus on what really matters,” he said. 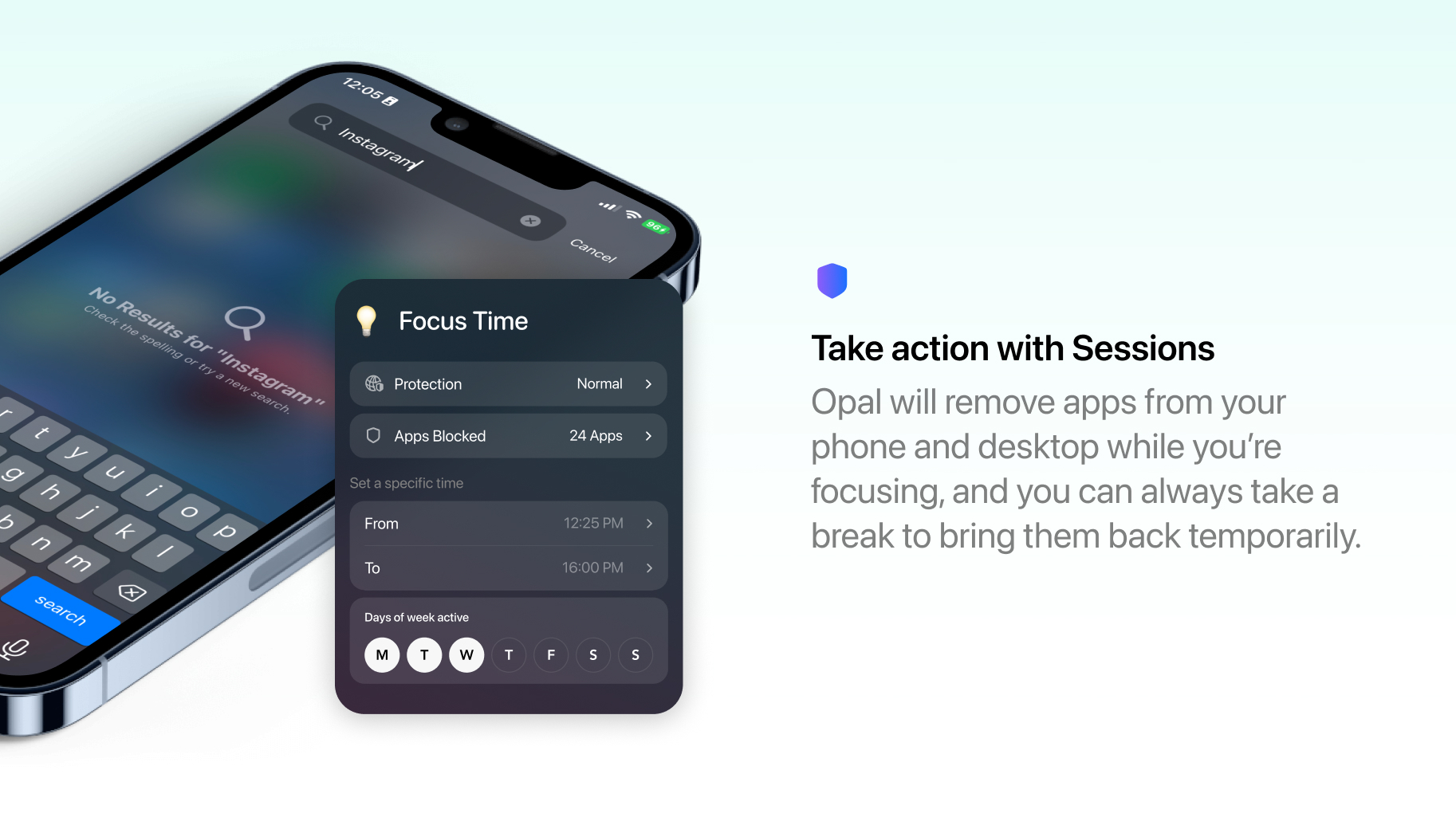 The new app will also allow users to temporarily block apps from their phone and desktop (via its Chrome app) while engaged in focus sessions. For instance, you could block your use of Instagram or other distractions, while you’re at work. The app will be removed from the Home Screen and won’t even come up if you do a search for the app in Spotlight Search during this time.

Where before, the app relied on a VPN to make this work, it’s now using a new technology in iOS16 called ManagedSettings, which is part of Apple’s Screen Time API.

The iOS 16-ready version of Opal launched on App Store today and is additionally available for desktop users on the Chrome Store.