Hey, all, greetings from Queens. I’m back home from Apple and happy to be back from the high double-digit heat (but it was a dry heat!). I got a strong response from last week’s newsletter, wherein we discussed questions around robotic delivery. Always nice to be reminded that people are, in fact, reading this thing we put out into the world every week.

One reader brought up the question of safety in relation to delivery ’bots — specifically, for those people who have expressed concerns around having strangers deliver food to their front door. It’s an angle worth exploring. I’d add some privacy concerns around the robot’s data collection into the mix as well. Anyway, this stuff is going to be in the news for a long time, so let’s keep exploring the avenues there.

And then there’s the story of a delivery robot reportedly rolling through a crime scene in L.A. That’s a whole new can of worms I’m not sure I have the time or energy to open this week. Our mobility team notes,

In this case, the bot approached the intersection and a human operator took over. Initially the human operator paused at the yellow caution tape. But when bystanders raised the tape and apparently “waved it through,” the human operator decided to proceed, Serve Robotics CEO Ali Kashani told TechCrunch.

For this week, I’ve been thinking about Amazon again. You may know that I’ve been following unionizing efforts closely for TC over the last couple of years. I would argue that the future of labor is one of the most important — if often overlooked — stories in the tech world in 2022. The Amazon Labor Union has been on the front line of that story, as blue-collar tech workers march for representation. 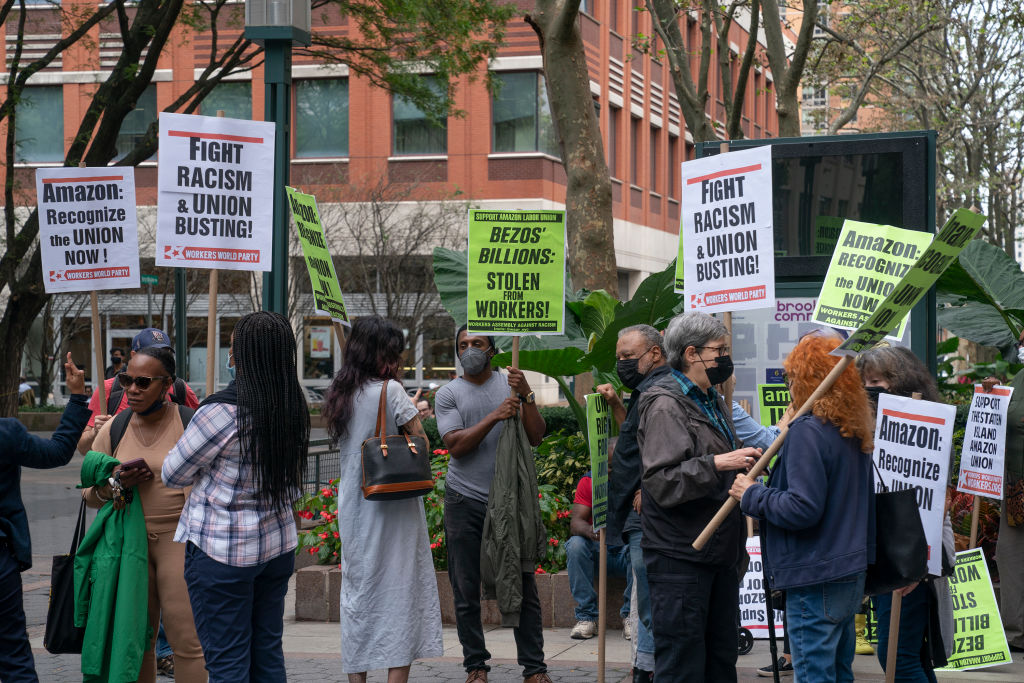 Supporters of organizing a union at Amazon Staten Island warehouse rally in front of the field office of National Labor Relations Board (NLRB) located at 2 MetroTech. NLRB acknowledged that they will start an investigation on the matter. Image Credits: Getty Images / Lev Radin / Pacific Press / LightRocket

Without going into it too deeply here (this is a robotics newsletter, after all), the short version is that some of what Amazon feared has been coming true. Specifically, April’s vote to unionize JFK8 in Staten Island has opened the flood gates to additional efforts. Upstate in Albany, workers will be voting on whether to join a union next month. We can see similar sentiment bubbling up in places like St. Louis.

For posterity (and because we only got it after the story was published), here’s Amazon’s position on the matter: “We remain skeptical that there are a sufficient number of legitimate signatures to support the union’s petition for an election, but the NLRB is moving forward. We’ve always said that we want our employees to have their voices heard, and we hope and expect this process allows for that.”

I bring all of this up because, while Amazon workers are at the forefront of union drives, Amazon itself is at the forefront of robotics. Neither is especially surprising given Amazon’s massive reach, but it will be interesting to note how these two subjects will eventually dovetail. Amazon will tell you that its robots exist, in part, to relieve some of the pressure from human workers. Make the machines do the dull, dirty, dangerous stuff. Workers, meanwhile, have not been shy about their concerns that robots could put more pressure and higher productivity expectations on their jobs — or perhaps replace them outright.

I’m going to be Mr. Even-Keeled Pragmatist here and say, some of both are going to be true in the end. But as the presence of robots increases in the workplace, I anticipate that job security as it pertains to automation will be an increasingly central part of union demands. One thing we know for certain: Amazon’s about to have a lot more robots in the very near future.

Image Credits: Amazon Cloostermans under a CC BY 2.0 license.

Thanks to Ingrid for grabbing the news of this latest acquisition while I was traveling. Amazon buying Cloostermans is a big piece of the company’s efforts to ramp up first-party production of industrial robotic systems. Here’s Cloostermans CEO Frederik Berckmoes-Joos on the matter: “We’re thrilled to be joining the Amazon family and extending the impact we can have at a global scale. Amazon has raised the bar for how supply chain technologies can benefit employees and customers, and we’re looking forward to be part of the next chapter of this innovation.”

Financial terms were not disclosed, but the deal finds 200 machinists, engineers and other roles at the Belgian firm joining the Amazon ranks.

Funding news for the week involves a $2.3 million seed round for Peer Robotics. The funding, led by Kalaari Capital, finds the Connecticut firm working to deploy robotic systems designed to mimic human work in an effort to set up warehouse systems with minimal programming required.

Naturally, the company cites ongoing labor shortages as a key driver in interest. “Manufacturers regularly deal with lots of repetitive, labor-intensive tasks that are great candidates for automation,” says co-founder and CEO Rishabh Agarwal. “Small and medium-size companies are struggling with the labor shortage today, not to mention high turnover. Also, many operations are still manual with employees operating at a high risk of injuries and fatigue. Solutions to date have been too expensive and complex.” 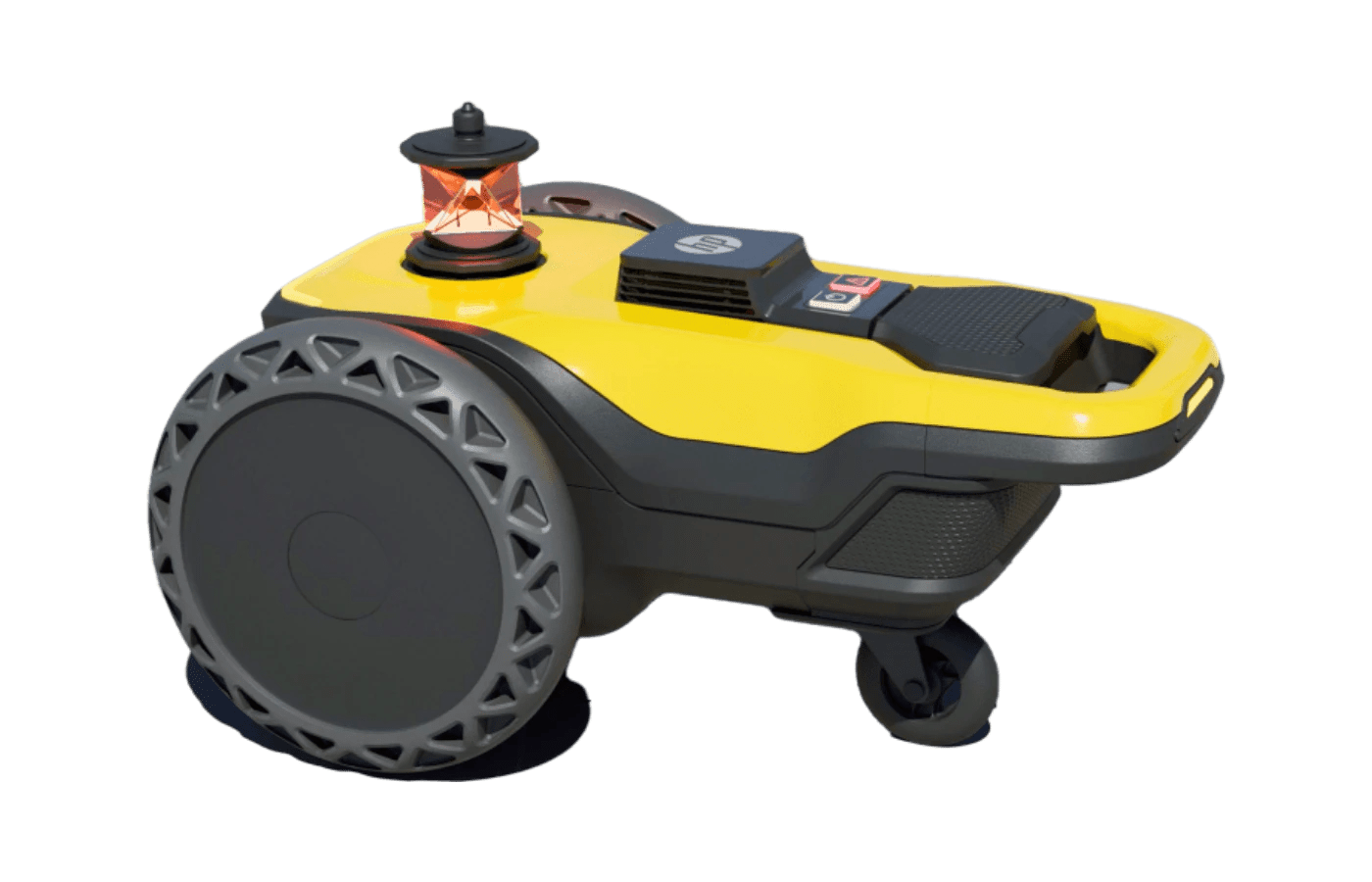 Meanwhile, HP recently joined the growing number of blueprint-printing construction robots that also includes names like Rugged. My suspicion is this is the first time a lot of folks are seeing this functionality. Construction is a massive category, so HP’s entry in the space will only serve to raise the profile of other players in the space.

Here’s the feature set from HP:

Pricing hasn’t been revealed yet, but HP has already begun a soft rollout with partners in North America. A proper commercial release is set for next year.

And lastly, I spoke to someone over at Fox Robotics, who confirms that CEO/founder/Google X ex-pat Charles DuHadway is out of the company, as of May. The company says the move was due to “personal reasons,” rather than financial struggles. However, the company is still officially without a permanent chief executive four or so months out. Instead, cofounder/CTO (and fellow former “Moonshot Factory” employee) Peter Anderson-Sprecher is currently serving as interim.

The company says it’s actively looking for a full-time CEO and closing out its latest funding round.

Prove you’re not a robot and subscribe to Actuator.