I’m not a doctor, but I’ve been led to believe that heads and brains are important parts of human infrastructure, and protecting them makes a lot of sense. The other thing worth keeping in mind is that all heads are slightly differently shaped, and I’m surprised we haven’t seen more, better-fitting helmets coming to market. That’s where customized, 3D-printed helmets come in. For just over $300, the 3D printing noggin-defenders at Kav will send you a fit kit to take some measurements, print your helmet and two-three weeks later the delivery van turns up at your door. The company just opened a factory in Redwood City in Silcon Valley to start fulfilling orders from across the U.S.

“Consumers like the thought of domestically produced goods, but the premium associated with paying a living wage, operating in a carbon-responsible way and U.S. regulations act as a deterrent. The recent supply chain snarls have companies scrambling to secure raw materials and inventory at great expense, undoing decades of just-in-time manufacturing and sparking global inflation. They are forced to make difficult decisions compromising on speed, quality and costs,” said Whitman Kwok, founder and CEO of Kav, in an interview with TechCrunch. “Kav set out to build the world’s most advanced helmets, and in the process create a beacon of how manufacturing can excel, not despite labor, environmental and regulatory considerations, but because of them.”

Kav built a solar-powered 3D printing fab, which is able to print “thousands of helmets per month.” The company launched its first, $390 helmet back in April, but has since optimized the production workflows and has been able to lower the price per custom helmet to $320 per unit. 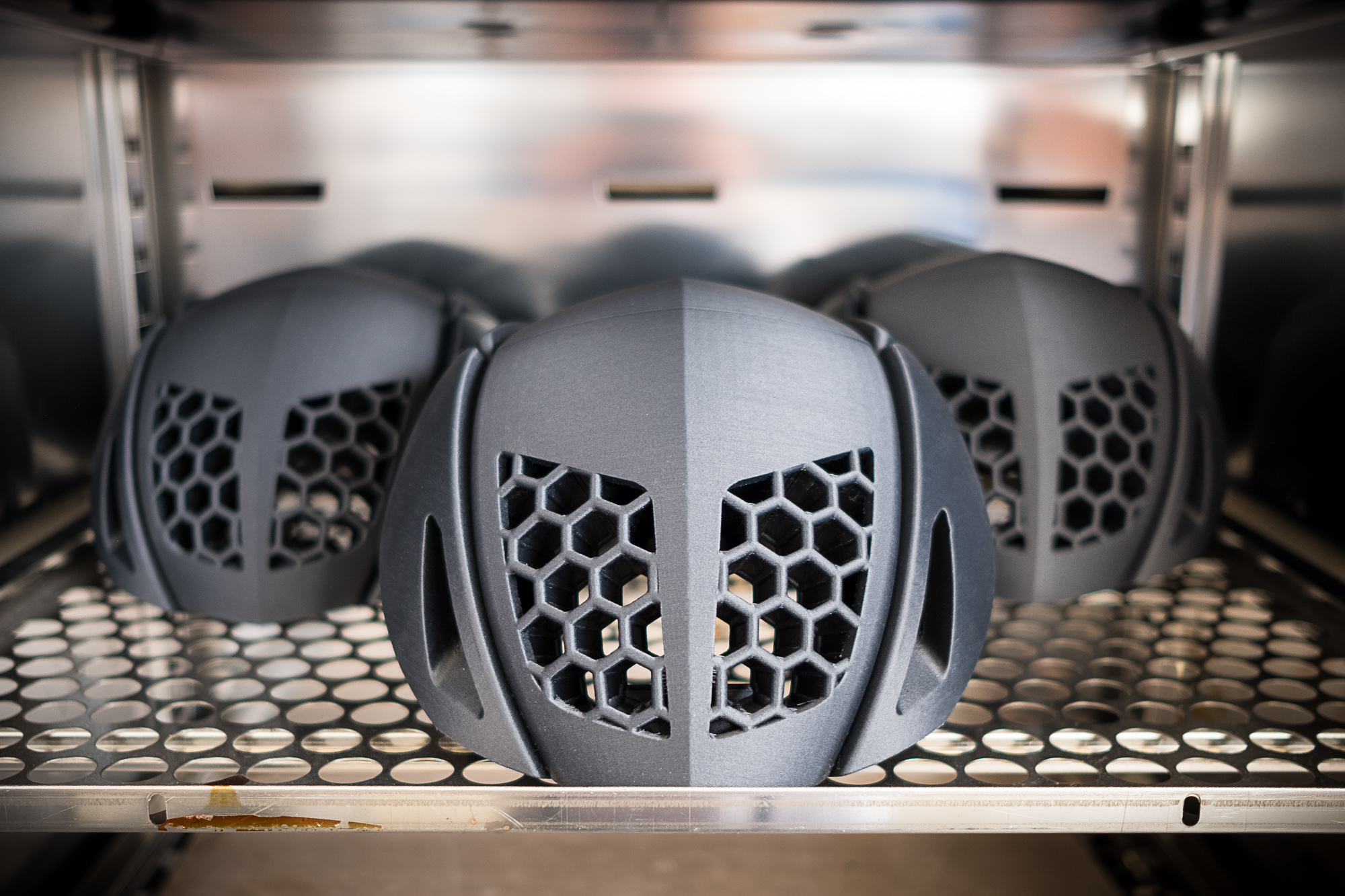 Fresh helmets, get yer helmets, fresh out of the ov… I mean, 3D-printer. Image Credit: Kav.

Before opening the current factory, Kwok told me the company was creating proof-of-concept helmets in “a glorified garage,” but the new lab is stocked with a stack of new tech and custom-made materials to print helmets.

“We’re on our fifth generation of printers,” said Kwok, which are heavily modified Prusa printers. “We’ve retrofitted all new hardware, rewrote all the software and built environmental controls on top of the entire cluster. We use a proprietary carbon fiber nylon composite formulated for impact attenuation and stability across temperatures ranging from -15C to 70C. It took 27 iterations, but there’s nothing else like it on the market.”