If you’ve ever waded into a new Discord server and immediately been overwhelmed by a fast-scrolling wall of conversation with no obvious entry points, a new feature should make that process a bit less overwhelming. Discord is rolling out a new flavor of channel to make it easier to stay up on a server’s conversation without staying glued to chat.

Discord describes Forum channels as “a place designed for focused discussions, not just free-range chatting” and server members will be able to browse these channels for what’s relevant or make a new one for a fresh topic. Server owners and mods can opt to create a Forum channel, a text channel or a voice channel, and the new kind of channel will live in the same place but be distinguishable with a chat bubble icon. Clicking the icon shows a list of specific conversation threads posted under a given topic, which should go a long way toward making Discord both more organized and more relevant to people who can’t always hang out in real time.

Forum channels will roll out immediately across mobile and desktop to most servers with community features enabled. Discord notes that all users won’t be able to use the feature right away but it will continue to expand access until Forums are universally available.

Discord first announced Forum channels back in February, though the feature was in limited testing in a handful of large communities at the time. Big servers need more ways to organize their sheer tangled mass of conversations into something comprehensible for the average community member and Forums were designed as one solution to the problem. While most of Discord is in real time — and nearly impossible to keep up with or catch up with in a busy server, if there’s something you missed — the company wants to build out a more asynchronous side of the app that gives people a way into the conversation even if they haven’t followed every beat. 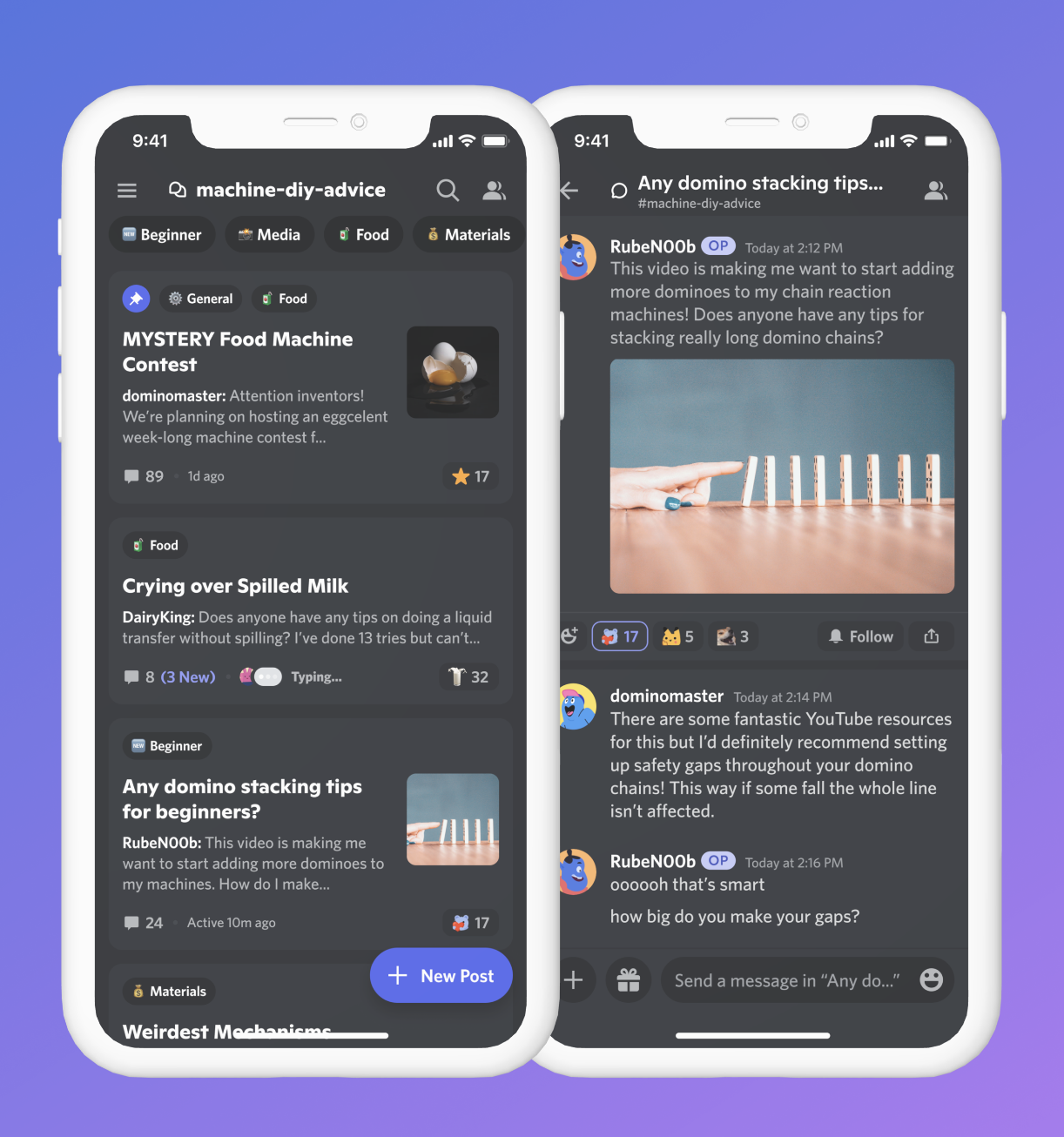 The explosive popularity of Discord communities is a double-edged sword. A big Discord server brings tons of people together in a way few other social apps can, but those servers can host hundreds of thousands of people online and chatting at once (Genshin Impact’s server has 330,000 people online simultaneously right now, for example). With a third of a million people interacting at once, it’s difficult if not impossible to keep up with what’s going on, unless you can find a corner of a busy server that’s talking about exactly what you’re interested in and jump into the chatter at the right time.

Forum channels are designed to give structure to the chaos, offering “organized” conversations that people can hop in and out of without missing out. Online forums and message boards are ancient internet history at this point, but the enduring usefulness of Reddit makes it clear that even in a world of endless video and audio content, searchable text-based forums are still essential for some tasks.

When you need to know something really specific (What’s the best shrimp taco place in my micro-neighborhood? Is this one Fortnite quest where I have to kill Darth Vader bugged for anyone else?), Reddit is just about the only place you can go to easily search for a hyperspecific answer to something that’s pretty niche to begin with. It’s wise for Discord to layer in more features for people who want to use the app like Reddit, just like it’s probably wise for Reddit and other social apps to splice their own experiences with more real-time Discord-like features.

Discord is testing forums, new mod tools and homepages that surface hot topics in some servers