On paper, iOS 16 is the version that comes after iOS 15. But in reality, iOS 16 finishes the work that started with iOS 14. This year’s update to Apple’s mobile operating system is all about making your phone more personal.

With iOS 14, Apple revamped widgets. It led to a new wave of apps that help you completely transform the home screen. People started uploading screenshots to social networks and it became a viral feature. The success of these new highly customizable widgets have surpassed all expectations.

With iOS 15, Apple helped you customize your phone to your needs with different Focuses. You could turn on the “Sleep” Focus at night to disable pages, turn off some notifications and more. You could turn on the “Work” focus to change your home screen and show your most important work information — a calendar widget, app icons for your work apps, etc.

With iOS 16, Apple redesigns the Lock Screen and ties up loose ends when it comes to device personalization. The Lock Screen is an important part of iOS. You likely tap on your iPhone display dozens of times per day to check the time or look at your most recent notifications.

And yet, you probably haven’t spent too much time thinking about it over the past few years. That’s because it’s been quite static and hasn’t changed much from a high-level perspective. There’s the current date, the current time and a long list of notification bubbles.

An extension of your personality

Over the past 15 years, chances are many important life events occurred on your smartphone. You made new friends in various conversation threads, you broke up with a text message and met new people in dating apps, you accepted job offers and learned of the passing of a family member. Your phone makes you laugh and makes you cry.

But what makes your iPhone truly yours? Sure, you can put on a case that stands out and a wallpaper that reminds you of your happy place. But that’s not enough.

With iOS 16, Apple has completely revamped the Lock Screen. It starts with new features for the wallpaper. When you pick a photo in your photo library, you can now enable a depth effect to make a face, an animal or an object stand out from the background. It can slightly overlap with the current time, which makes it look like a magazine-style masthead.

Apple lets you apply an effect on the photo by swiping left and right. By default, you get an unedited version of the photo (“natural”), but you can put an emphasis on the subject in the foreground with the “studio,” “black & white” or “color backdrop” effects. If you’re more into minimalistic wallpapers, you can apply a “duotone” or “color wash” effect to turn a photo into a monochrome wallpaper. 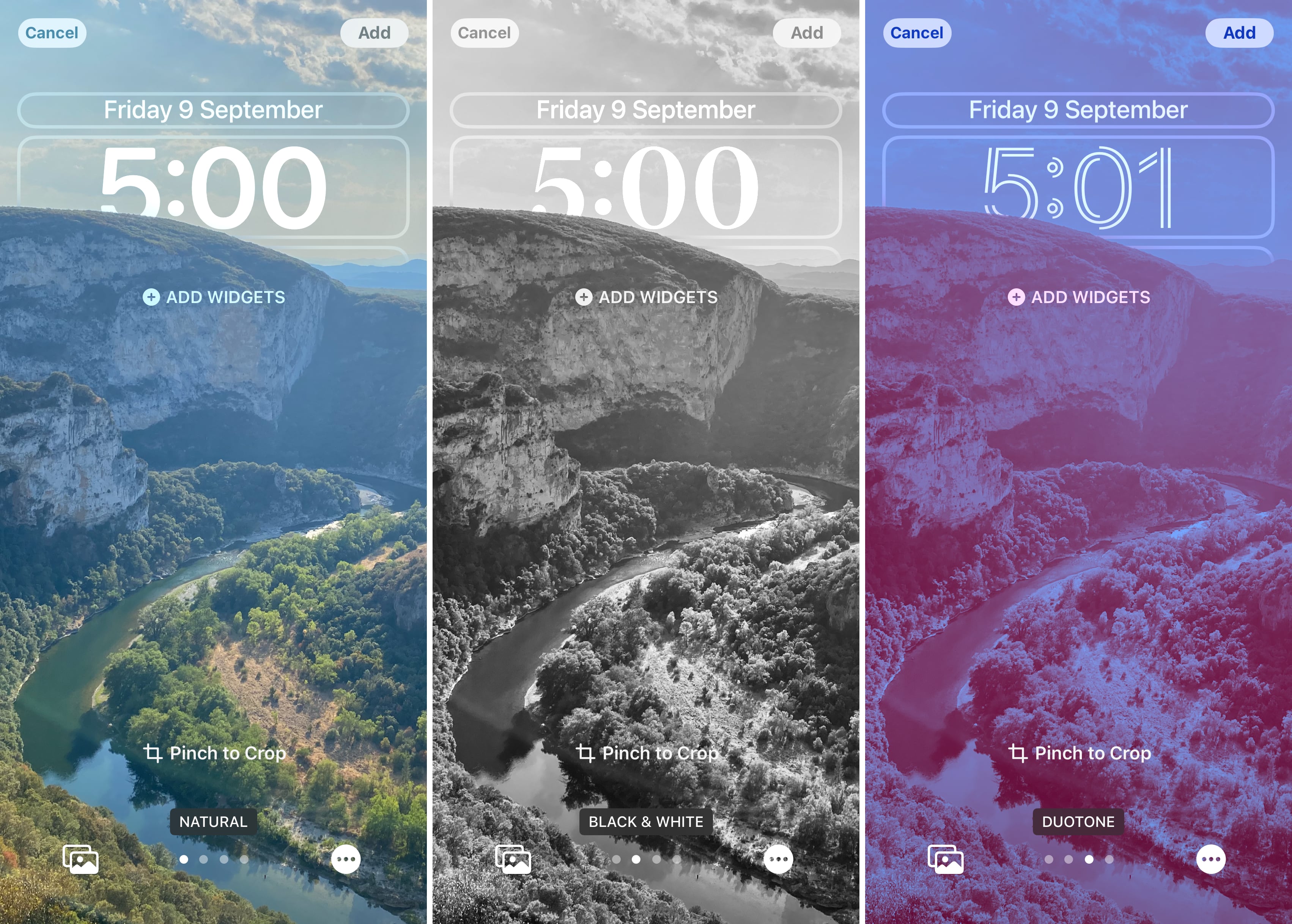 Combined with Apple’s smart suggestions of people and landscapes, you can get a cool wallpaper in just a few taps and swipes. And if you want to get a little surprise every time you tap on your phone, you can enable photo shuffle to refresh your wallpaper daily, hourly, on lock or on tap.

When you’re done configuring your Lock Screen, you can save it and associate the same wallpaper with your home screen as a pair. By default, Apple blurs photo wallpapers so that app icons remain easy to find. But you can customize the home screen in case you want something more specific.

If photos aren’t your thing, iOS 16 has a sort of built-in wallpaper generator. You can create color gradients and emoji grids featuring your favorite emojis.

There are also two cool dynamic weather-based or astronomy-based wallpapers. The astronomy one in particular has a particularly cool effect. You can get a zoomed out view of planet Earth (which reminds me of the very first iPhone Lock Screen) and it zooms in on your current location when you unlock the phone. 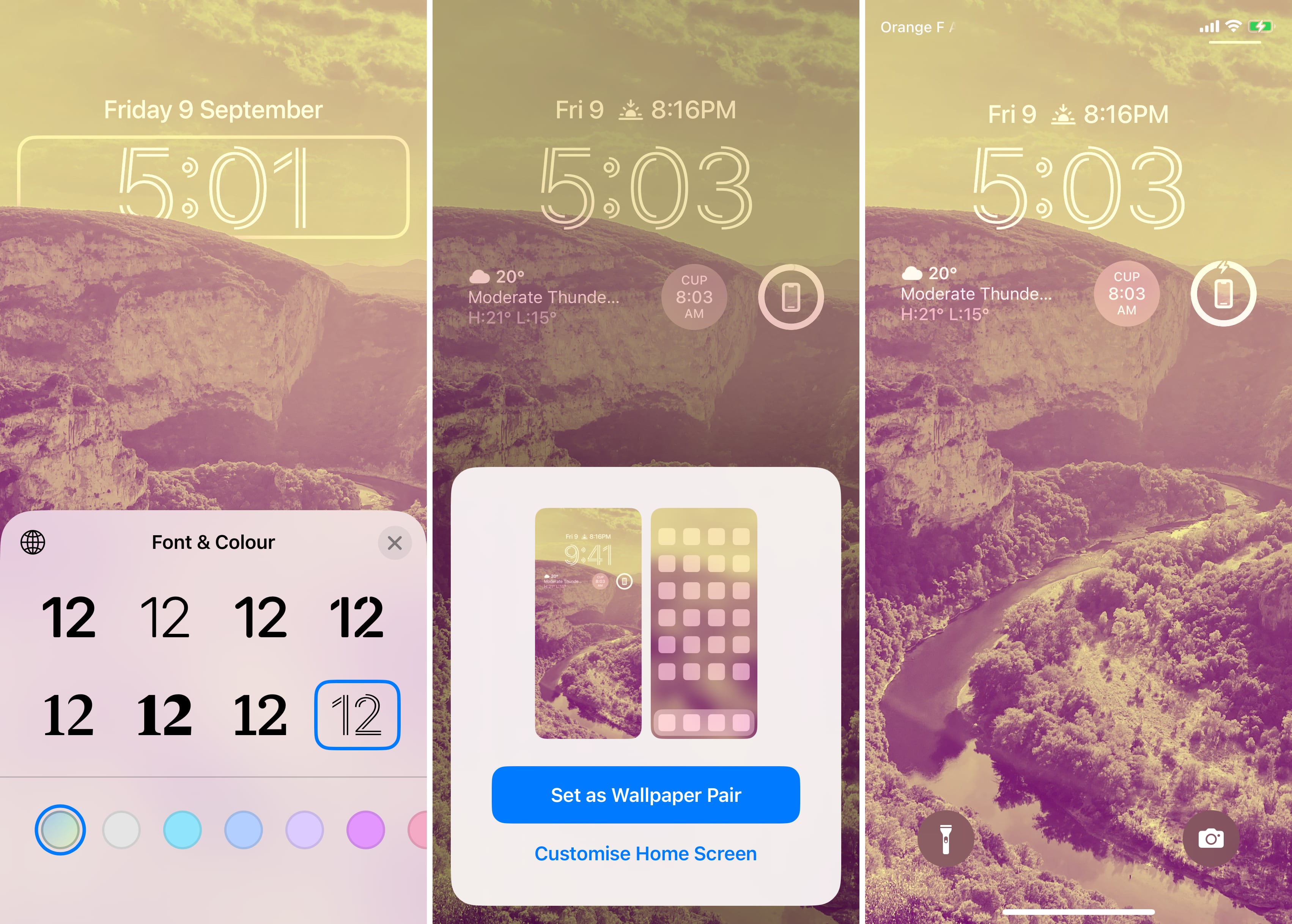 Sure, the Lock Screen looks better. But it also works better. In addition to the new wallpaper engine, you can add tiny informative widgets. The idea is that you should be able to glance at your phone to get data points without having to unlock your phone.

By default, Apple lets you see weather data, the current time in other time zones, your Activity ring progress, battery information, your next alarm or a list of your next reminders, calendar events, etc.

But it’s going to be interesting to see how third-party app developers embrace the feature. We’ll probably see widgets that track the progress of a package, display upcoming birthdays or alert you in case of incidents on your subway line.

With iOS 16, you can save multiple Lock Screens and build your own Lock Screen library. In some situations, you may want to see different widgets. For instance, if you’re at work, you might switch to a less personal wallpaper with work-focused widgets. 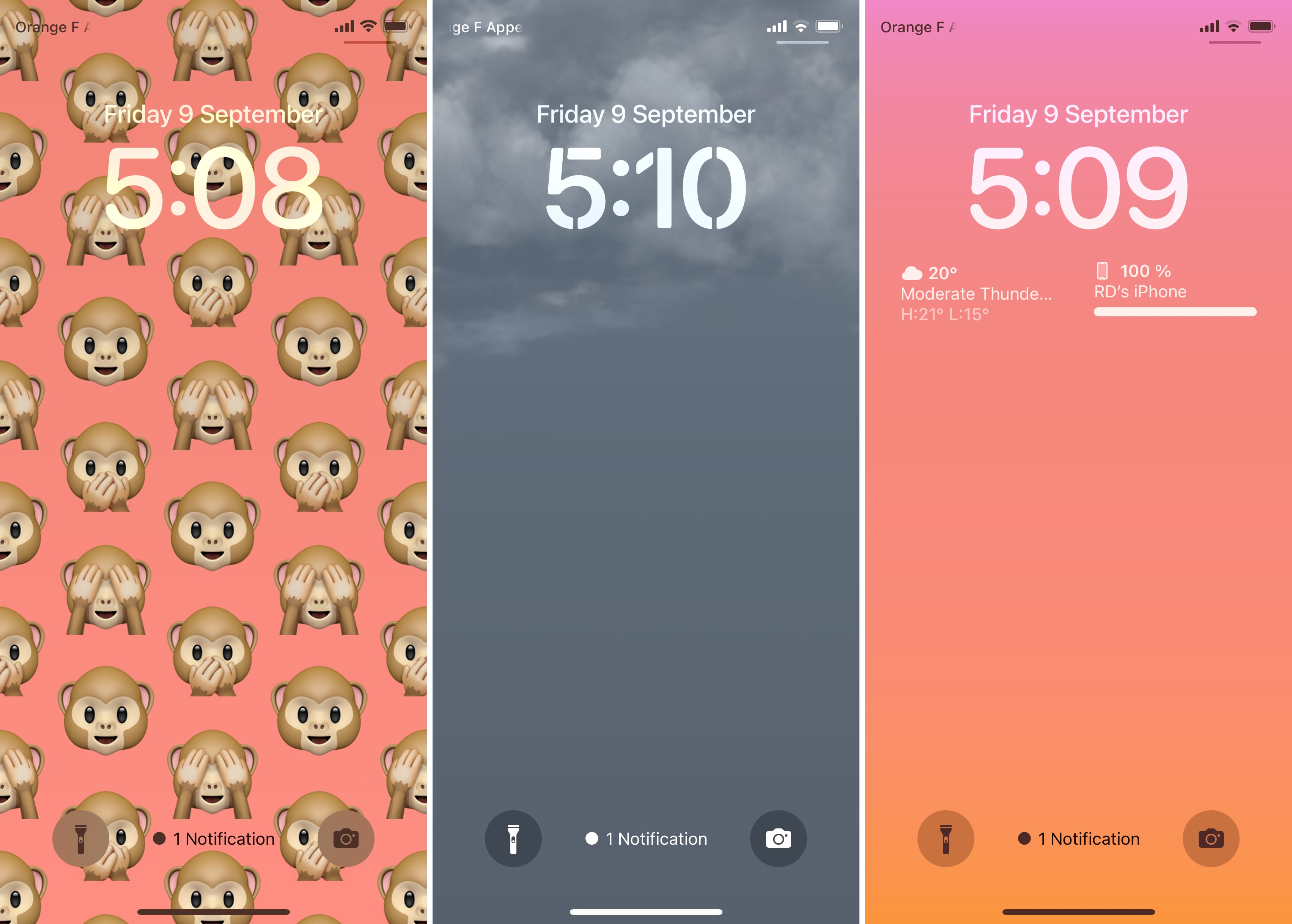 And yes, you guessed it, Apple has paired these new Lock Screen features with Focuses. With iOS 15, Focuses were somewhat limited. You could enable or disable some home screen pages with a specific Focus but that was it.

Now, you can tie a specific Focus mode with a Lock Screen and home screen. Whenever you switch from one mode to another, your entire phone adapts to this new environment. Essentially, you can have a day phone and a night phone without having to carry two different phones.

Let me give you a practical example. I have configured a “Sleep” Focus that turns off all notifications. When I turn it on, it now also changes my wallpaper so that it becomes completely black. There is only one widget on this specific Lock Screen — my alarm. In the morning, when I turn off this Focus, my wallpaper changes and my notifications start showing up again.

I could go on and on about these new customization features. At first, I thought it was gimmicky and that I would only change my Lock Screen once and forget about it. But once I saw the full picture, I could see the potential for a phone that adapts to your needs throughout the day. 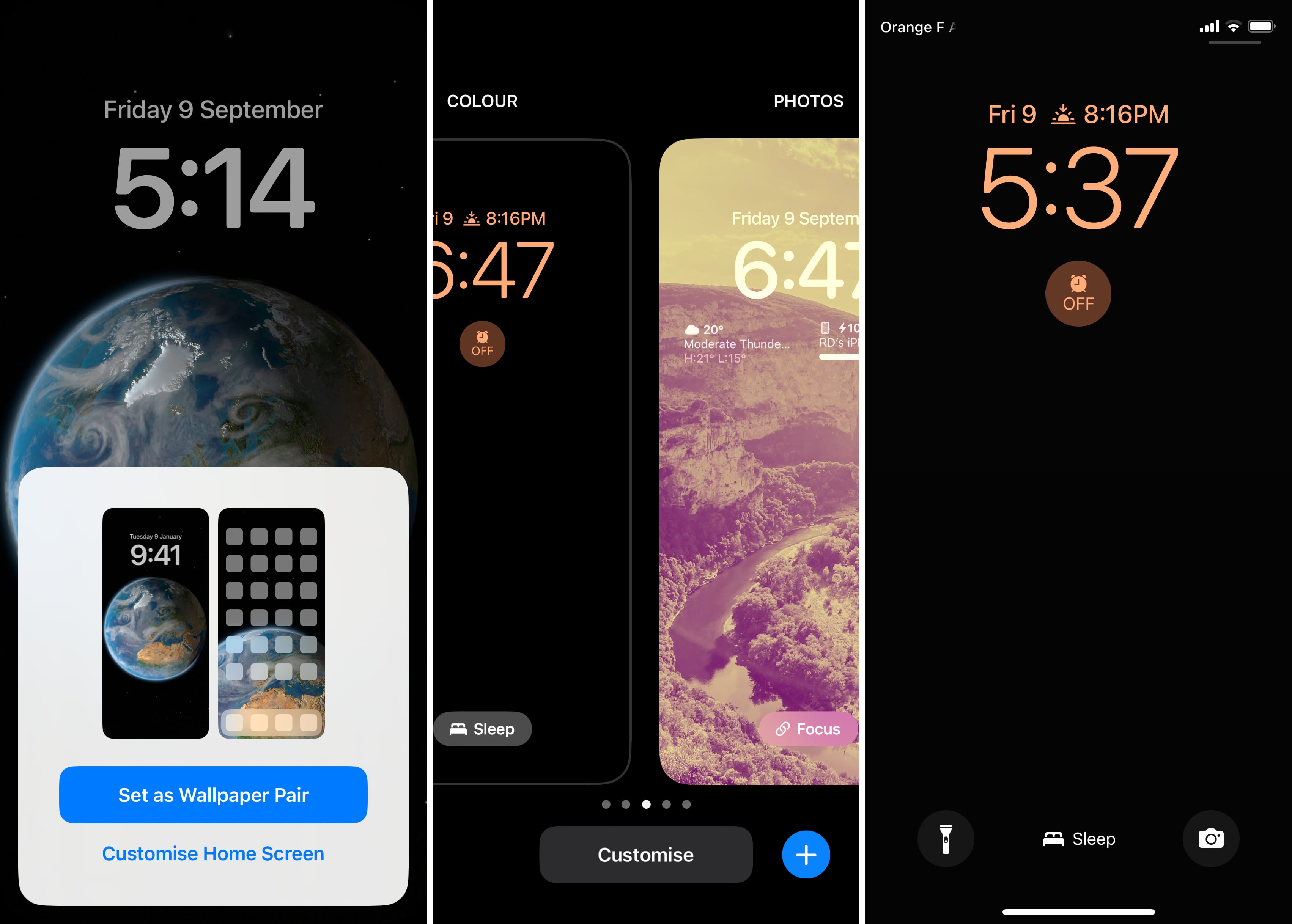 The new Lock Screen is clearly the most remarkable feature of iOS 16. But many different parts of the operating system have also been improved in one way or another.

For instance, there are new dynamic notifications called Live Activities. While they will be even more useful with the Dynamic Island of the iPhone 14 Pro, this new notification type opens up some new possibilities. For instance, Uber could use it to let users track the progress of their driver from the Lock Screen.

Even social apps like BeReal could use it. When users receive the notification that says “Time to BeReal,” they are supposed to take a photo within two minutes. BeReal could display a countdown timer in its notification directly.

Live Activities will be coming later this year, just like another feature that I’m really excited about — shared photo libraries. In addition to your personal photo library, you can now create or join a shared library with your family and closed ones. This way, you no longer have to send photos to each other as anybody in the shared library can view the original, full-resolution photos.

When you first set it up, you can choose to add some photos based on a start date, the people in the photos or all your past photos. You can also choose to manually add past photos to the shared library later.

From the camera interface, you can then choose if photos you are taking should be saved to your personal photo library or your shared photo library. But we’ll have to wait a few more weeks to start using it.

In other small but meaningful changes:

And the list goes on and on. It’s always nice when you get so many quality-of-life updates. But it’s clear that the updates to the Lock Screen are the reason why people will be upgrading to iOS 16. And on that front, Apple has done a good job.

All the nifty iOS 16 features you want to know about