Looks like someone made a booboo. A video game streamer in Mexico, Ramiro Cardenas, claims to have found an engineering prototype of the Meta Quest Pro in a hotel room. Per Cardenas’ leaked videos and photos, the new virtual reality hardware surpasses the current, consumer-grade Quest 2 by adding three cameras on the front of the headset. The controllers also have a new look, getting rid of the open circle design on the existing model.

Meta hasn’t offered much concrete news yet when it comes to its next piece of hardware. The name Meta Quest Pro hasn’t even been confirmed by the company, though developer Steve Moser told Bloomberg that he found the name “Quest Pro” in the code of Meta’s Oculus mobile app.

But from a demo that CEO Mark Zuckerberg posted this summer, we know that the Quest Pro will support mixed reality. The Quest 2 has greyscale passthrough cameras, which help users see their real-world surroundings without removing their headset. But the Quest Pro will have full-color, more realistic passthrough capability, plus depth sensors that help to accurately place digital objects into physical space. 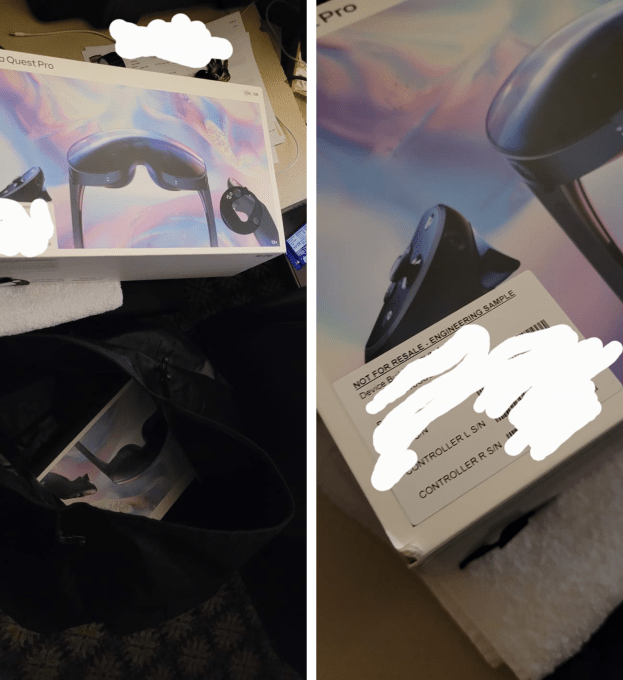 Meta’s high-end VR headset, known internally as “Project Cambria,” is expected to be announced next month at Meta’s Connect event on October 11. The timing would make sense, then, that the headset is packaged and ready to go for testing.

Of course, this is all a bit fishy, though. Who leaves a top-secret prototype in a hotel room, and what are the odds that a streamer who plays VR games would happen to be the person to find it? But similar incidents have happened, like when an Apple Software Engineer got drunk on his birthday and left at the bar a then-unreleased iPhone 4 that he was field testing. The same thing happened just months ago, when a prototype of the upcoming Google Pixel Watch was left in a restaurant.

Is this clever marketing, an elaborate prank or an honest mistake? For what it’s worth, Meta has not responded to TechCrunch’s request for comment.

Meta’s next VR headset might be called the Quest Pro