ScreenKit, an iPhone personalization app that’s topped 12 million downloads to date, is ready to embrace the new Lock Screen customization options shipping with the release of iOS 16 on September 12. Already a comprehensive solution for theming your iPhone or iPad with wallpapers, custom widgets and icons, the soon-to-be updated ScreenKit app will now expand into Lock Screen widgets, with a sizable update that brings over 100 new widget options to iPhone owners.

Unlike some other planned Lock Screen widget apps that focus on a single Lock Screen widget type — like a contacts or countdown widget, for example — ScreenKit will be coming out of the gate with a collection of over 100 custom widgets across over 200 pre-made Lock Screen themes, the company says.

This is in addition to the over 500 Home Screen themes and over 200 Home Screen widgets the app already offers across a range of styles and its over 5,000 custom app icons.

The Lock Screen widget collection includes around 25 major categories, the company says, each of which can be customized in five to 10 different ways, depending on the widget type. 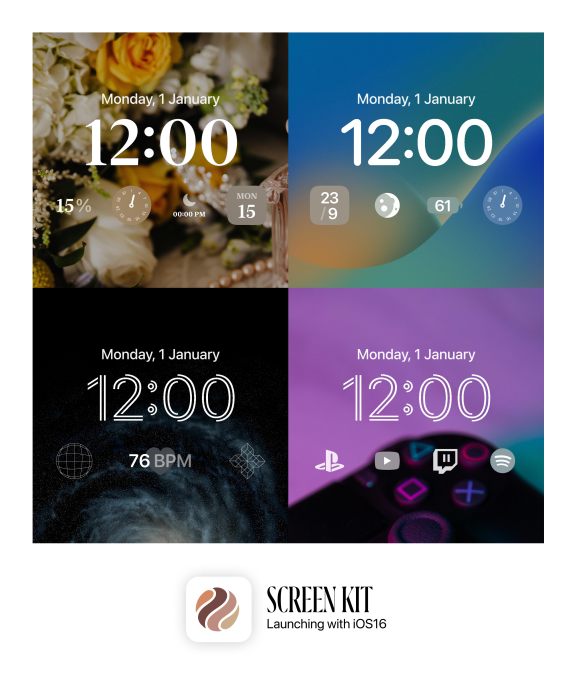 The company says its Lock Screen widgets will be designed to coordinate with its existing lineup of widgets and themes, so users’ final, customized designs remain consistent.

We’ve also found it interesting that some Lock Screen widget makers, ScreenKit included, have been expanding beyond informative widgets to include actionable ones in the form of app shortcuts.

ScreenKit won’t be the only one to introduce this type of widget with its updated experience. For example, we’ve been testing a pre-release app called Launchify, currently available through the app testing playground Airport, that’s doing something similar. The solution requires some setup, but afterward, you can directly access your favorite app with just a tap on the Lock Screen. (You’ll still need to authenticate with Face ID, Touch ID or a passcode, however).

ScreenKit’s app will continue to be a free download with a one-time upgrade option of $9.99 that opens up access to the premium version, with expanded access to its collection of icon kits and themes. However, the company will kick off the iOS 16 Monday launch with two free weeks of the premium features and pro customization options.

ScreenKit isn’t the only app planning to address the needs of users in search of Lock Screen customization options that ship with iOS 16, but it is one of the larger offerings in terms of both its collection and its reach. The company claims to add around 300,000 new users per month to its platform. It also offers a separate app, StyleKit, which also includes app icon themes, calendar wallpapers and Lock Screen animations that appear when the phone is charging.

The company says it plans to launch its app as soon as iOS 16 is released on Monday, but it may not arrive on the App Store immediately due to App Review delays out of its control.