GPS in its many regional flavors has become a ubiquitous feature in phones, smart watches, cars and other connected devices, but for all the location-based features that it helps enable (mapping being the most obvious) it has a lot of shortcomings: it can be slow and inaccurate, it can contribute to faster battery drain and, as people are discovering, it can be manipulated or exploited in unintended and alarming ways.

Today, a U.K. startup called FocalPoint that’s building software to improve GPS’s operations, accuracy and security is announcing a round of funding to continue building out its tech — which today works up to 4G and will in future also work with 5G and Wi-Fi — and to roll out the first commercial deployments of its system with early customers. Use cases for the tech include more accurate location for smartphone apps for navigation or location tracking (for example for running and other sports); to help companies with their navigation services (for example for transportation or fleet management); and for better GPS security overall.

Based in Cambridge and founded as a spinout from Cambridge University, FocalPoint has raised £15 million ($17 million), part of a Series C round that it expects to total £23 million ($26 million) when fully completed. Molten Ventures (FKA Draper Esprit) — which led a £6 million Series B in 2021– and Gresham House are the two investors in so far. Ramsey Faragher, the CTO and founder, said that the other investors, which include a major U.S. automotive brand that is a strategic investor, will be closing in the coming weeks.

FocalPoint about a year ago had another notable business development that is helping put the startup on potential customers’ radar: last September, it appointed Scott Pomerantz as its CEO. Described as a “living legend in GPS,” Pomerantz previously founded Global Locate, one of the first companies to bring GPS to the mass market, with its tech used by Apple and others. That startup eventually got acquired by Broadcom.

Speaking of Apple, FocalPoint’s focus on better GPS is coming at a timely moment. Just yesterday, the iPhone giant announced its newest Apple Watch models, featuring much more accurate GPS using a multiband approach on devices touting newly extended battery life. It is a signal of the priority that device makers are putting on improving GPS, and investments that they would be willing to make to do so, and thus the opportunity for startups offering new and more effective approaches to crack the market.

As Faragher explained to TC, GPS development to date has largely been based around chipsets embedded in the devices using it, which has meant that improving services by and large have depended on new versions of that hardware. That’s a big hill to climb, however, when considering the embedded market of legacy chips and the process of rolling out next-generation hardware: There were 1.8 billion GPS chipsets shipped as of 2019, with the total projected to grow to 2.8 billion by 2029. Smartphones account for the bulk of those numbers, but autonomy, road and drone devices are growing the fastest.

Along with that, GPS relies on using one or another of two radio bands; typically one produces better positioning than the other but it does so at a cost of draining battery life in the process.

FocalPoint is working on a software-based solution, Faragher said, which he said means that the chipsets themselves do not necessarily need to be swapped out or upgraded to implement its faster approach.

It’s working on algorithms, he said, which are aimed at understanding the directions of satellite signals, using this to gain better understanding of exact location of a device — a process that not only improves the accuracy of a location, but helps to identify when a signal is potentially getting spoofed to appear in one place when it’s actually somewhere else. This is carried out using the band that is less battery-intensive, which previously had been deemed to have poorer positioning performance. “The higher performing signal has always been more computationally intensive,” he said, which is why it impacts battery life. “We can make the lower quality, lower-battery-intensive signal better.”

There are other approaches aiming for the same outcome, but Faragher said they have been too costly and clunky.

“Only military antennas have been able to detect movement like this before,” he said, with those antennas coming in the form of satellite dishes that are the size of a dinner plate and cost around $10,000 each — a big expense when hundreds need to be used across a wider mobile network. “What we are offering is a military-grade feature for the cost of software upgrade,” he said. “We synthesize expensive antennae.” 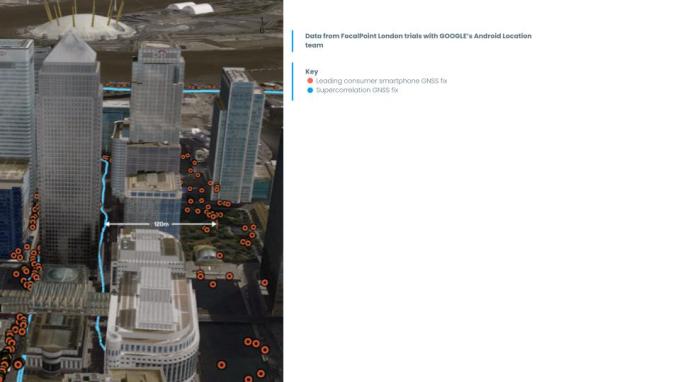 “We demonstrated to Google that before using our technology, it couldn’t use the lower-quality GPS band for its in-house mapping technology,” he said. That in-house tech is what Google would use for any navigation service, including for Google Maps as well as its devices. He said that Google’s approach, which looks at how signals bounce off buildings to figure out location, is useful with the higher GPS signal but not the lower one, therefore being a stronger drain on battery life. “We could make that lower band work.”

Faragher would not comment on whether it was working with Google, or any other specific companies, during the interview.

“Existing GPS technologies are no longer fit for purpose and we’re proud to continue our support for FocalPoint in its mission to revolutionise the accuracy of GPS and other global navigation satellite systems and in doing so, solve the issues faced by business and consumers with imprecise and unsafe receivers,” said David Cummings, a venture partner with Molten Ventures, in a statement. “We’ve been impressed with how the team has continued to build and expand since its Series B funding round last year, and are thrilled to support FocalPoint in this next exciting chapter for the company”.