“As software developers ourselves — working in health tech and fintech, where even minor bugs could have an outsized impact on people’s lives — we know firsthand how critical robust end-to-end testing is for all software businesses,” Perl said. “Our vision is to become the ‘operating system for quality’ that companies use to improve the holistic quality of their applications, beginning with automated end-to-end testing.”

Perl argues that one of the most complex challenges in building software today is the cost — the people, time, infrastructure cost — to test code from an end user’s perspective. Indeed, Statista found that organizations spent around 23% of their annual IT budgets on quality assurance and testing between 2012 and 2019. Perl says most companies either hire testers who are paid a pittance to review software manually or use software-as-a-service solutions that have a high technical barrier to entry. Neither, obviously, are very desirable scenarios.

But wait, you might say — automated software testing platforms already exist in abundance. There’s Waldo for smartphone apps, Autify for both mobile and the web, and LambdaTest, to name a few. Some newer vendors’ approaches are quite novel, like Mobot’s, which relies on fleets of robots built to bug-test apps.

But Perl makes the case that QA Wolf removes the complexity of quality assurance testing like few others do. That’s because customers get support along the way, including help developing a test plan, writing and maintaining tests, investigating failures, and reporting bugs.

“No matter how big or how small a company is, development teams usually lack the expertise and time to write, run and maintain end-to-end tests in-house,” Perl said. “Knowing that, the market responded by creating lightweight tools that simplify the job or even enable non-technical people to develop test cases. While those tools definitely help, they’re attempting to solve the wrong problem. The fundamental problem is that the industry still treats test coverage as something to build, rather than something to buy.” 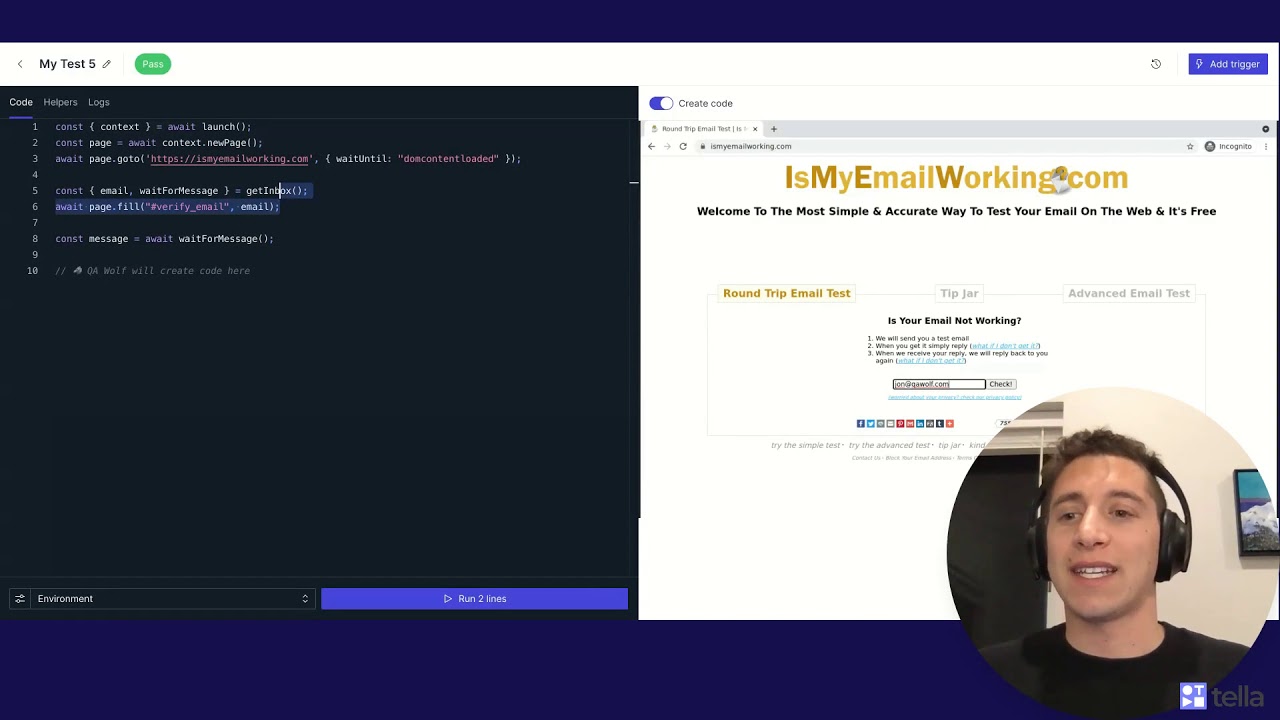 Perl founded QA Wolf in 2019 with the goal of changing that, bringing on co-founders Laura Cressman and Scott Wilson. Perl was previously the head of technology at home service booking platform Dispatch and the CTO of pharmacy supply chain firm Zipdrug. Cressman was a senior software engineer at Cityblock Health, a healthcare company spun out of Alphabet’s Sidewalk Labs, while Wilson was an account manager at Amazon before joining Wyze Labs — his most recent employer prior to QA Wolf — as a director of growth marketing.

At a high level, QA Wolf integrates with companies’ existing internal systems to give a real-time view of their software’s performance. Clients submit a short demo of their app, which QA Wolf uses to build a testing plan and begin coding automated test suites. The platform supports most any software app accessible via the web, including those that leverage third-party services like Stripe and Salesforce.

As QA Wolf builds out test coverage, it works with clients to help build tests into their processes and address problems with tests as they crop up. Perl notes that tests are written in Playwright, an open source testing package, allowing them to be migrated to other platforms if customers so wish.

“QA Wolf solves both problems with our technology and people approach, and a business model that incentivizes high performing and accurate testing,” Perl said. “For executives and technical leaders, QA Wolf ensures that their customers are getting the best possible user experience — free of bugs — for a fraction of the cost of how QA was historically done.”

QA Wolf promises a lot. But in a sign that it’s delivering on at least some of those assurances, the 45-person startup already has more than 50 customers, including early-stage ventures like Vividly, Minno and Worksome. Perl declined to reveal revenue figures, but he said that he expects QA Wolf’s workforce to grow to 60 employees by the end of the year as new clients come online.

Perl claims that QA Wolf will continue to differentiate in the future by building datasets of tests across web apps, which will allow it to develop new products and services on top of what the company already offers.

“Through economies of scale, QA Wolf’s capabilities will only become more powerful, enabling us to deliver high test coverage at an even lower cost than in-house or outsourced alternatives,” he said, stressing that QA Wolf is in stable shape compared to the larger microenvironment for young startups. “The pandemic has been a positive for us by shortening sales cycles with the shift to Zoom … In terms of the broader slowdown in tech, so far we have not seen a slowdown in growth and had our biggest week ever for new sales last week. Our revenue has gone up 25x over the past year and business has doubled in the last 6 months alone.”