So you’re sitting there watching all of the new gadget news from Apple this afternoon — a new Apple Watch Series 8, SE, Ultra, new AirPods Pro…and then, wait — is that Helly R.? If you’re a fan of the Apple TV+ series “Severance,” you might have caught a little Easter egg or two during Apple’s iPhone 14 presentation this afternoon. The Cupertino company teased viewers about the much-anticipated season two of the popular Apple TV+ show amid the deluge of hardware news by offering a couple of brief scenes that featured the show’s lead actor riding the subway — something we’ve never seen her do.

The scenes could possibly indicate we’ll get to follow Helly’s character further outside the office in the upcoming episodes.

If you haven’t caught on yet to “Severance,” the Emmy-nominated Outstanding Drama Series features a dark take on work/life balance. Instead of employees engaged in “quiet quitting,” the workers in this sci-fi series opt for a high-tech medical procedure — “severance” — that surgically divides your memories of work life from those of your real life — and vice versa.

But whatever is really going on at Lumon, the cultlike company they work for in the macrodata refinement division, remains a mystery for the time being.

At the end of season one, the employees had teamed up on a plan to try to figure things out, leading to some big reveals about who these people were outside their work personas. The newer employee Helly Riggs, played by actor Britt Lower, will certainly be a focus in the forthcoming episodes given what we learned about her in the season one finale. (No spoilers here, just go watch!)

Thanks to her distinctive red hair, Helly’s character was easy to identify in a couple of scenes during the iPhone event presentation today.

She first appears in a video following the introduction of the new AirPods Pro.

You can catch a glimpse of Helly shortly after Apple presenter and senior engineer Mary-Ann Rau touts the new device’s better noise-cancellation capabilities while standing in a noisy subway car — double that of the original AirPods Pro, she says. As the clip ends, Rau steps out of the train car and onto the platform. And that’s when we spot Helly waiting to step on. 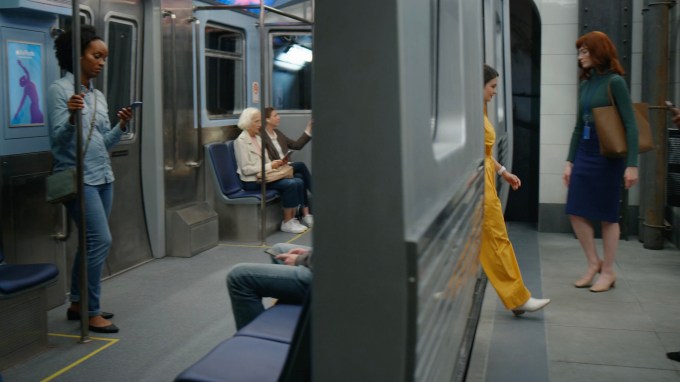 Later, Apple pulls a Marvel-like end credits tease. After Tim Cook bids us farewell, the camera pans up to the stars above Apple Park — in an Apple logo, of course. The scene fades and Helly appears again.

This time, she’s again about to board the subway, still dressed in her work attire and carrying a large brown tote. The image flickers a little here — could this mean someone is pulling the levers back at corporate to swap her brain from work mode to another? (As we learned later in the season, the medical procedure Helly underwent to become a so-called severed worker can do a few other things too!)

Apple hasn’t yet said when viewers will get more of “Severance,” only that it’s been picked up for a second season.