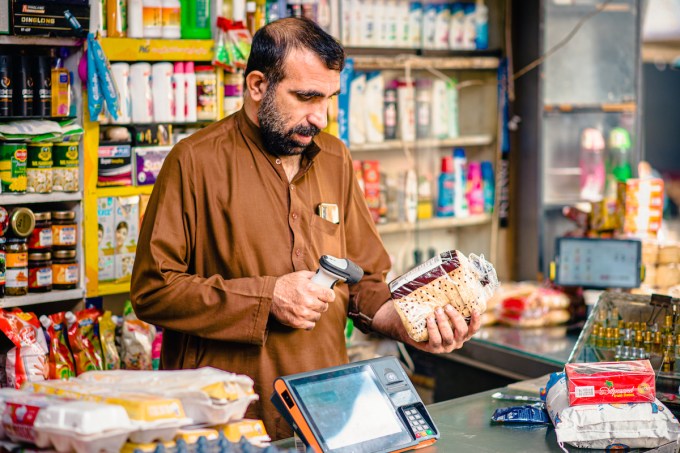 A kiryana owner with one of SnappRetail’s point-of-sale devices. Image Credits: SnappRetail

The number of global retailers, department stores and supermarkets operating in Pakistan is increasing, which spells convenience for consumers, but trouble for kiryanas, or small general stores. According to a report by the State Bank of Pakistan, general stores’ growth will slow down, especially in urban centers, as large retail outlets continue to expand their networks.

One reason why kiryanas are struggling to compete is that many still run on pen-and-paper systems. Karachi-based SnappRetail wants to help them digitize all their operations, while also providing micro-loans. The Karachi-based company announced today that it has raised a $2.5 million pre-seed funding round led by Zayn Capital’s BitRate Fund, with participation from Antler and Century Oak Capital.

The funding will be used for product development, hiring and expanding SnappRetail to 1,000 customers, with the goal of covering 13 cities by the end of 2024. The startup’s CEO, Adeel Rasheed, told TechCrunch that there are 900,000 grocery retailers in Pakistan and it is targeting 300,000 retailers that contribute 50% of grocery transaction volume.

SnappRetail’s products includes point-of-sale (POS) devices and an end-to-end operations platform (for inventory management, stock ordering and analytics) that it says helps small retailers compete against larger ones. The platform also enables them to accept digital and card payments, and access micro credit for working capital.

Rasheed told TechCrunch that the team’s background in the retail sector led them to launch SnappRetail, since they saw that many kiryanas run on manual systems and don’t have bank accounts.

“What this essentially does is that it makes these store owners miss out on a big opportunity to use technology to gain insights out of sales data and create forecasts, improve financial management, manage inventory better and the list goes on and on,” he said.

SnappRetail monetizes by charging a monthly retail fee from its customers. It also sells retail sales data to large consumer goods manufacturers. Rasheed said that as the company signs up more retailers, it will launch more monetization channels through partnerships for products like working capital loans, B2B aggregation and card payments.

Another startup that is digitizing retail in Pakistan is Bazaar, which announced a $70 million raise earlier this year. When asked how SnappRetail differentiates from Bazaar, Rasheed said that “Bazaar is an app-based B2B platform. We, on the other hand, are deploying a hardware hosted micro-enterprise system in the shop which helps the retailer digitize their core store operations. SnappRetail is more like Square in the USA but for the grocery retail segment and more like Jiomart in India.”

In a statement, Zayn BitRate Fund co-founder and general partner Faisal Aftab said, “Being a proven concept globally, there is no doubt SnappRetail has the right approach to solving the essential problem of the retailer. We were particularly impressed by the experience and maturity this founding team brings to the table, hitting the right balance between hypergrowth and managing the burn.”

How e-commerce companies can brave the new retail environment