After SpaceX announced its Starlink Maritime service last month, it was only a matter of time before some household name in boat world went all-in on the satellite service. Sure enough, today Royal Caribbean Cruise Lines announced it will be adding the service to its whole fleet, after a pilot service on one of its ships got rave reviews.

It should come as no surprise that commercial marine endeavors like this one are embracing Starlink. The test deployment aboard the Freedom of the Seas “received tremendous positive feedback,” and if you’ve ever been on one of these boats, you can probably guess why. Current satellite at sea options aren’t great: expensive and slow, having enjoyed a market with little competition or innovation for the last couple decades.

Starlink Maritime will be a real kick in the pants for existing providers, considering how quickly a huge customer like Royal Caribbean decided to buy in to the new satellite on the block. Even though its coverage is limited to coastal waters for now, the speed is way better and will probably pay for itself with onboard “premium Wi-Fi” charges in the first month.

The service costs the company roughly $5,000 monthly and has at least a $10,000 upfront hardware fee for the special terminals you’ll need to use it. That’s a rounding error in the rolling costs of running vessels as large as modern cruise ships. (An image provided by Celebrity Cruises suggests additional dishes will be used — I’ve asked for more information.) 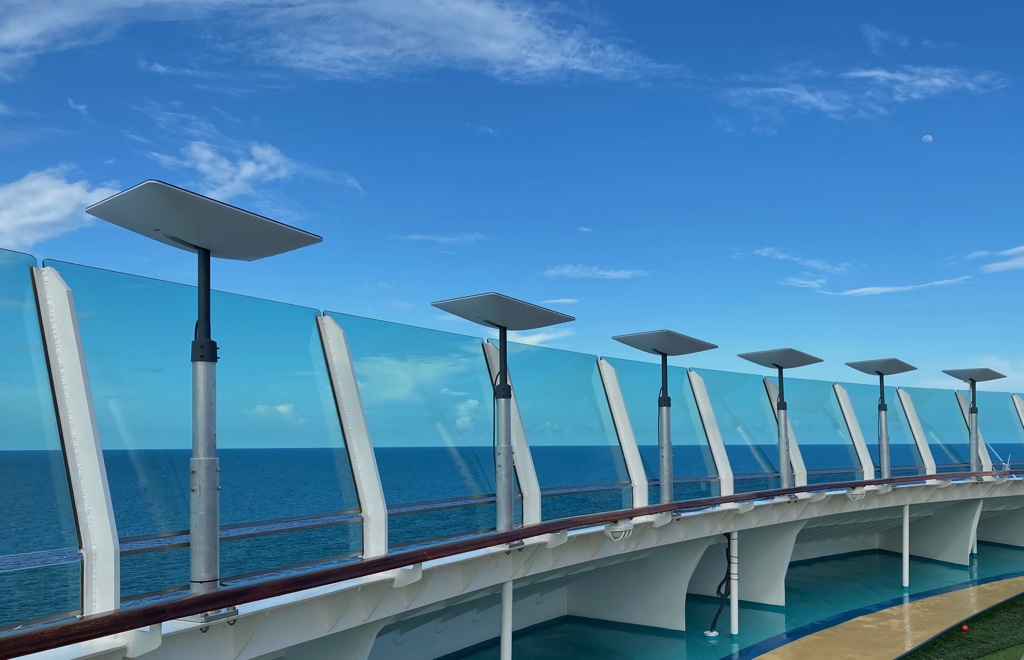 How many is too many? Starlink dishes in a line on a Celebrity Cruises ship. Image Credits: Royal Caribbean

Although the Starlink constellation doesn’t yet work mid-ocean (such as on container ships), the plan is to provide that capability in the northern hemisphere by the end of the year and the southern hemisphere in early 2023. Central and South America, all of Indonesia and Malaysia, and the southern half of Africa aren’t on the coverage map, though, which feels like leaving money on the table.

The dishes will be added to all vessels in the Royal Caribbean International, Celebrity Cruises and Silversea Cruises fleets, in case you’re planning a trip. No specific dates yet, but the company says they should have the service on all ships by the end of Q1 2023.

Starlink on your yacht, so hot