Panasonic is eyeing Oklahoma as the home for its next lithium-ion battery plant, according to a report Friday by The Wall Street Journal.

The proposed venture, which is expected to supply Tesla with a high-capacity, range-boosting battery, is part of a movement to bring auto manufacturing onshore as car companies and suppliers try to mitigate inflation, geopolitical conflict and short supply of the raw materials required to make electric vehicles.

TechCrunch is seeking independent confirmation and will update if more information becomes available.

Panasonic is working on a battery expected to increase energy capacity fivefold, boost range by more than 15% and cut production costs.

In July, the Japanese electronics maker announced plans to build a $4 billion battery plant in Kansas that will manufacture and supply lithium-ion batteries to EV makers. That project, which represents the largest economic development project in Kansas history, is slated to be larger than the Gigafactory it operates with Tesla in Sparks, Nevada, which is already one of the largest lithium-ion battery factories in the world.

Automotive manufacturers and suppliers have announced more than $38 billion in investment through 2026 to boost battery production in the U.S., according to AlixPartners. 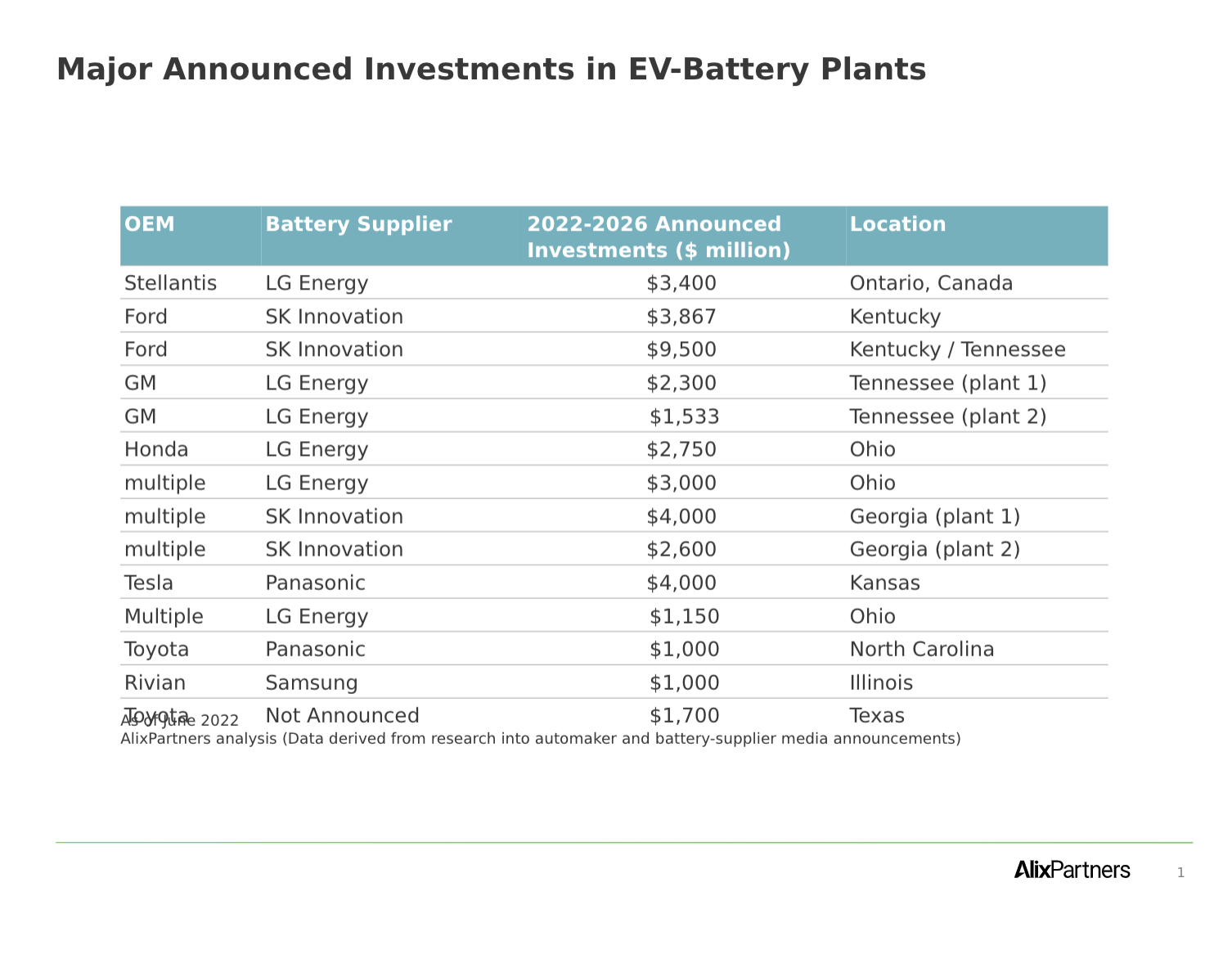 Those projects, which won’t begin production until mid-decade, include the largest-ever economic development projects in North Carolina and Georgia. A number of other EV plants dot southern and Plains states such as Tennessee and Oklahoma.

Toyota’s first U.S. battery factory — the $1.3 billion plant near Greensboro, North Carolina ­— is expected to open in 2025. Hyundai is investing $5.5 billion to build an EV and battery manufacturing facility in Georgia. Rivian is also building a $5 billion factory in Georgia and newcomer Canoo, which moved its headquarters to Bentonville, Arkansas, has plans to build an EV factory in Oklahoma. VW’s all-electric ID.4 is now being assembled at its Chattanooga, Tennessee plant.

Shortening the supply chain will ultimately help manufacturers control costs and reduce dependence on foreign sources for raw materials. The Inflation Reduction Act passed by Congress this month is expected to accelerate the development of the domestic EV industry by providing manufacturers with $40 billion in tax credits.