Following the overturn of Roe v. Wade, companies have been bolstering efforts and navigating the legal landscape to provide care to birthing people. Yelp is now following suit.

The company announced, in an exclusive first shared with Axios, that it will add a consumer notice to crisis pregnancy centers (CPC) to differentiate them from abortion clinics. The notice will notify users and read that these centers “typically provide limited medical services and may not have licensed medical professionals onsite.” According to Planned Parenthood, these centers do not provide abortion services and attempt to convince birthing people to not get an abortion.

The change will apply to religious and nonreligious centers in the U.S. and Canada.

“It has always felt unjust to me that there are clinics in the U.S. that provide misleading information or conduct deceptive tactics to steer pregnant people away from abortion care if that’s the path they choose to take,” said Noorie Malik, Yelp’s VP, to Axios.

Yelp is probably most commonly known for restaurant reviews but is also a source of information for all types of businesses. According to Axios, Yelp began distinguishing CPCs from abortion centers in 2018. Additionally, a Yelp spokesperson told TechCrunch that “businesses that do not offer actual abortion services and explicitly mention being faith-based or having some type of religious affiliation are categorized as ‘Faith-based Crisis Pregnancy Centers.’” Businesses that explicitly state that they are anti-abortion or pro-life, but without any public-facing information about being faith-based, are categorized as “Crisis Pregnancy Centers.”

Users will see the notice at the top of a company’s profile after clicking on its profile to get more information. Though, it must be noted that not everyone going to a CPC is seeking abortion services. 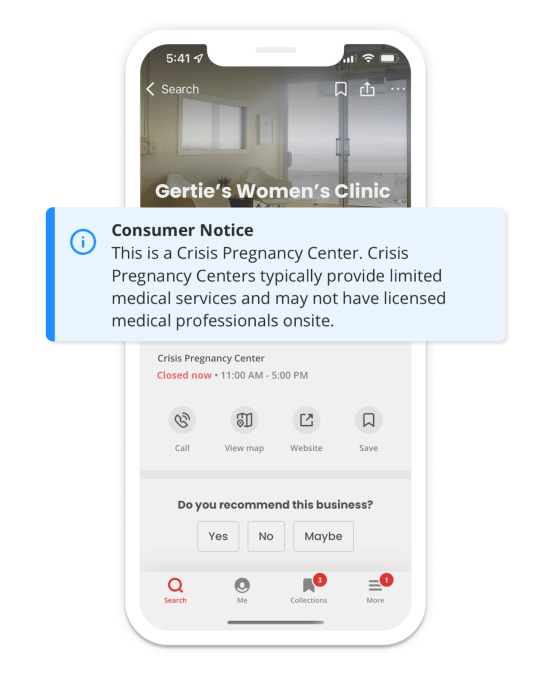 According to NARAL Pro-Choice America, a pro-abortion advocacy group, there were close to 2,500 CPCs across the country and 23 states have laws supporting CPCs in 2015. Additionally, some states provide public funding to CPCs.

Yelp’s move is just one in the search engine world. Google, in 2019, updated its advertisement policy so companies that want to run ads with a focus on anti-abortion-related keywords have to disclose whether they provide abortion services or not.

Additionally, Google Maps also labels if a clinic provides abortion services or is a “pregnancy care center.” However, there has been scrutiny around the CPC results on the platform that led Congress members to ask Google’s CEO to limit those results.

Although the move by Yelp is meant to better aid those seeking pregnancy services, according to Malik, the company has not explicitly stated how they plan to better serve those individuals other than the notice.

“For people specifically searching for abortion services, we’ve increased our efforts to better match them with reproductive health services that actually offer abortions and make it less likely they will see crisis pregnancy centers in their search results,” a Yelp spokesperson told TechCrunch.

This year, alone, the company has evaluated 33,500 businesses and recategorized 470 of them as CPCs. The company plans on further evaluating over 55,000 businesses across the U.S., Canada and Puerto Rico.