Meet 28: A U.S.-based femtech startup founded by a wife and husband team that’s scored $3.2 million in seed funding in a round led by Thiel Capital with a fitness and wellness pitch that aims to connect women to the hormonal phases of their menstrual cycle for physical and emotional gain.

The startup is drawing on recent popular science that suggests there may be benefits for people who menstruate in adapting their workouts, nutrition and other types of wellness-focused activities to the hormonal changes they experience each month through their natural cycle.

The founders were bootstrapping prior to scoring backing from Thiel Capital. Others investing in the seed round include Learn Capital, Steel Perlot and some unnamed private angel investors.

“A lot of women I know were experiencing painful periods and other hormon- related symptoms. Women were tired of the pill and the negative impact it’s had on their brains and bodies. They were getting off it in droves and looking for natural alternatives,” says co-founder Brittany Hugoboom, discussing her inspiration for starting the business in a call with TechCrunch.

“Many women voice experiences of being dismissed or even gaslit by their doctors who would just tell them it was all in their head. And most alarming of all it became crystal clear that most women are totally clueless about how their cycle works. And it’s not their fault because most women don’t get a lot of sex education. So the idea was born from those problems — we want to democratize the science of hormone and menstrual health. And provide women everywhere with tangible tools to physically and emotionally flourish.”

Hugoboom, who is a model as well as an entrepreneur, says she originally had the idea over three years ago but only started filming content for the program around 1.5 years ago to prepare for a product launch.

The team is kicking things off now by offering free “cycle-based” fitness and wellness programs — which are soft launching (on the web) today, starting with a focus on gaining users in the U.S. market. (NB: Android and iOS apps are in the works and slated to launch soon, in a month or so.)

28’s product takes the form of daily exercise videos, nutritional profiles — and “science-based emotional insights,” as its co-founder tells it — which are pitched as customized to the user’s cycle (and, at the least, that looks like savvy marketing which could help the startup stand out in a very packed fitness/wellness space).

The fitness/wellness program is geared toward four distinct cycle phases related to the female reproduction system’s hormonal fluctuations: Namely, the period itself, when hormone levels (and potentially energy) are low, as the body sheds the uterine lining it built up over the cycle to prepare for the possibility of a fertilized egg; the follicular phase, as the cycle starts again with hormones like estrogen and testosterone rising to encourage the release of a new egg; ovulation, when an egg is released, the window of fertilization opens and sex drive (and energy) is high; and the luteal phase, before the next period begins, when progesterone dominates and women may experience associated symptoms like PMS.

The startup classifies these phases into a low-energy, self-care-focused “restore” phase; a replenishing, muscle-growth-focused “awaken” phase; a positive, high-energy “perform” phase; and a winding down “balance” phase — to get an idea of how it’s configuring workout and wellness content to the user’s cycle. 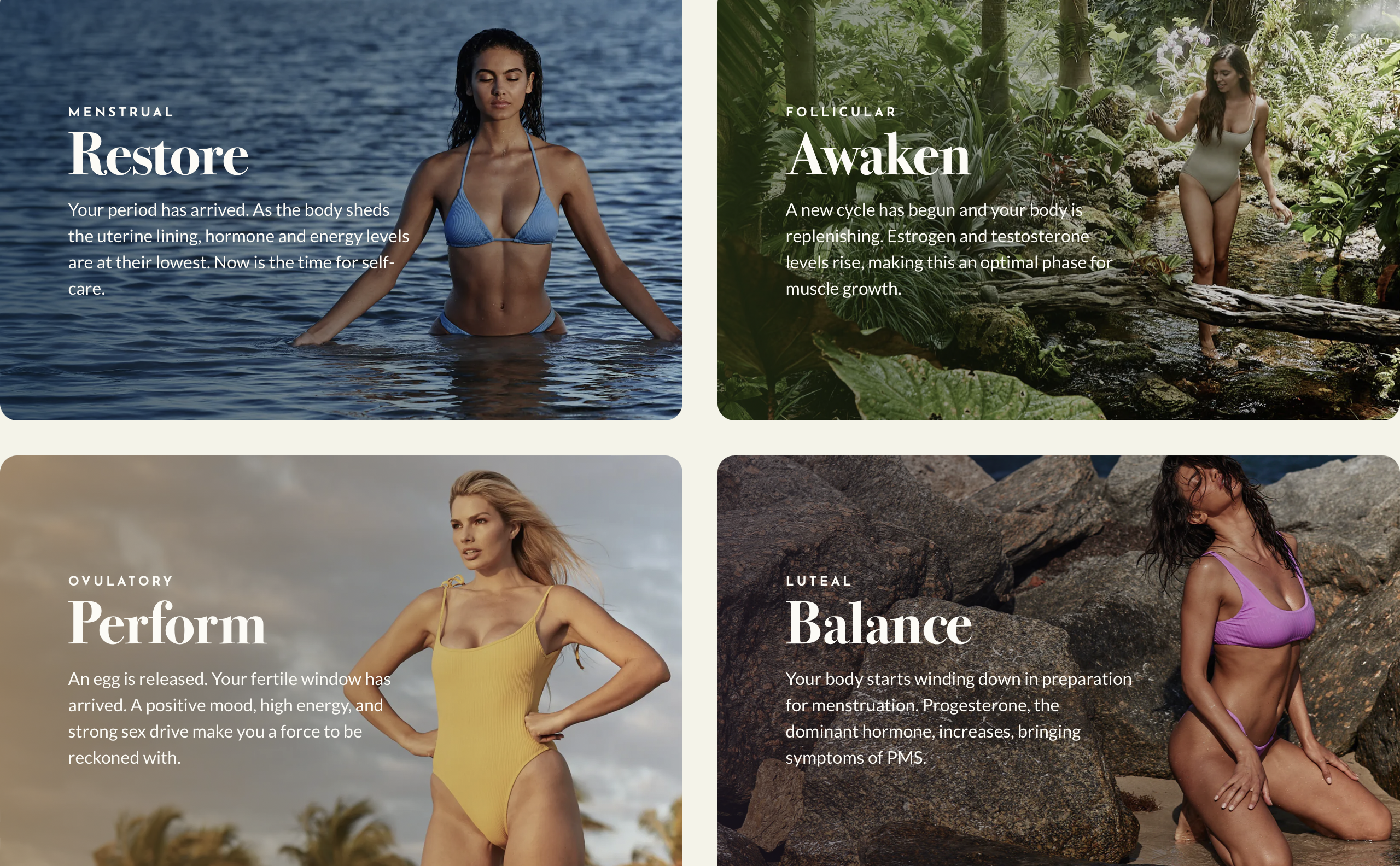 The four hormonal phases of the cycle 28’s program is targeting. Image Credits: 28

“The great thing about 28 is that we’re incorporating a lot of different types of functional movement during different parts of your cycle,” says Hugoboom, suggesting there are both physical and emotional benefits for women in aligning their training, nutrition and other lifestyle factors with their cycles.

“So, for example, when it’s your menstrual phase you’re going to be doing more like a yin-yoga stretch detox. You’ll start doing more Pilates-based workouts in your follicular phase. Ovulation you can do the hardcore kickboxing, circuit-training. And then you kind of go back down — but you ebb and flow with your cycle. So I think that’s what makes it really unique.”

She also emphasizes that while fitness is a big focus for 28 it’s just “one component” of a broader ‘holistic wellness’ play.

It’s worth noting that 28 is not (currently) providing a period-tracking app itself (there are of course plenty of those already). Nor is it offering any hardware or other technology for women to actually track their hormonal levels, as some other femtech startups are. All 28 users need to do to get content configured to their cycle is to input the first day of their last period. (If a user doesn’t currently have a period, say because they’re pregnant or on the pill for example, the startup suggests using the lunar cycle as an alternative.)

Given that approach to on-boarding, it’s clearly only going to be able to approximate the hormonal phases of each user, since cycles can vary in length and regularity — which suggests there’s a limit to how close to the “science of the cycle” it can really get. (And talk of ‘detox,’ or indeed ‘science-based horoscopes,’ will surely get the average scientist hard-cringing.)

But a single data point method is the obvious choice if you’re gunning for maximum consumer uptake, ease of access and scalability. (An FAQ on 28’s website also notes users can adjust the date point “as needed if future periods come late or early by updating your cycle in your profile settings.”)

Hugoboom does hint that the team is looking at developing additional technology — to boost personalization. “Right now we’re not a cycle tracker — but we are working on technology to make it more personalized and accurate,” she suggests.

Discussing 28’s overall approach to fitness and wellness, she says her experience of over-training — and associated injury issues — in her 20s, when she was routinely racking up six hardcore workouts a week, led her to seek out different trainers with a more “prehabilitative” approach, focused on injury prevention. And that philosophy has fed into 28 — with the website describing its “method” as “a rejuvenating, stability-based approach to feminine fitness designed by supermodel trainers and medical experts to work with your natural cycle”. 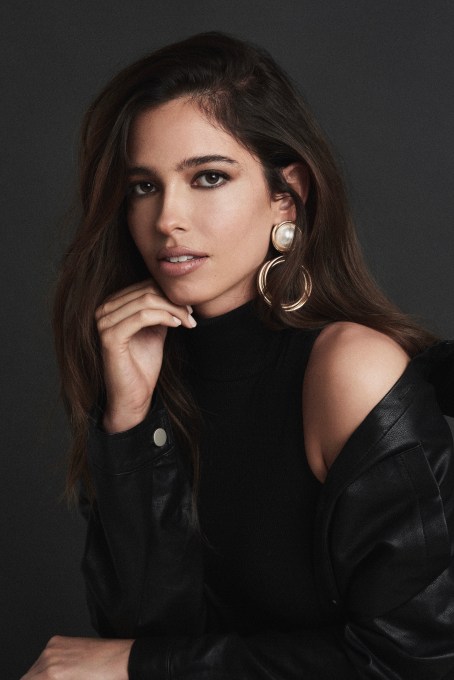 While 28’s first wave of customized lifestyle content is free to consume, it’s clearly not free to produce which could raise privacy concerns as there is the question of what happens to user data? The startup is alive to these concerns — and an FAQ on its website claims “we will never sell your data” (although targeted advertising may entail the sale of attention, rather than the actual user data itself, so privacy claims that frame the issue as all about the sale of data bear close scrutiny, at the least) — while lauding the “support of patient investors who share our vision.” (But, well, even very patient investors will want a return eventually.)

“We’re not going to be doing any third-party advertising that has to do with selling user data,” says Hugoboom when asked about wording in its privacy policy that could imply it’s leaving the door open to monetizing user attention, such as via targeted advertising.

“We’re not doing any monetization that way whatsoever,” she reiterates when pressed for confirmation that the startup won’t be participating in monetizing user attention via ads. “The data we collect is strictly confidential and only used for the purpose of providing a customized user experience.”

So how, then, does 28 intend to monetize the product — assuming it’s able to scale usage as hoped? (She says its goal is to get to a million users in the next 12 months.)

“Right now we’re a freemium model and luckily our investors support that decision because we want to get as many women in line with their cycle as possible and learning about their cycle — but when we do monetize in the future it’ll likely be through premium content and physical products,” she suggests, hinting at a possible subscription plan ‘premium’ option down the line.

“We have some R&D on a physical product right now in development that will go with 28,” she adds, declining to specify exactly what kind of kit it’s working on. (It’s not hard to imagine the wide range of products that could be offered for sale to a community of active, health-conscious women — not least supplements which the product may simultaneously be suggesting a user ‘needs’ at a given point in their menstrual cycle.)

Who is the typical 28 user? The service is being geared toward women of any age, per Hugoboom — and is generally aimed at “holistic, health-conscious” woman — but she suggests young 20s is “probably” the primary demographic — as they may be at an age where they’re looking for a natural alternative to hormonal contraception.

Is she comfortable building a business out of the U.S. that’s focused on women’s health — and processing data about their reproductive cycles — at a time when women in the country can face stark legal consequences for trying to access health services like abortion following the Supreme Court decision to overturn Roe v. Wade? The decision, earlier this year, led to a number of states banning abortions and means pregnant women in affected regions of the U.S. can risk prosecution for seeking an abortion or if they lose their babies and authorities suspect a termination is not a natural miscarriage.

“We’re not selling any user data so I don’t think there would be an issue. It’s just women learning about their natural cycle and how they can benefit themselves so I don’t really think there’s any conflict there,” she responds on that, adding: “We talked to our lawyers about it a couple of weeks ago, when the decision [to overturn Roe v. Wade] came out, and realistically it would be very hard [for state prosecutors to subpoena data that could pose a legal risk to users].”

We were also curious about 28’s choice of lead investor.

Peter Thiel, whose fund Thiel Capital is leading its seed, may not seem the obvious choice of backer for such a female-focused business — given certain (infamous) libertarian views, expressed in an essay some years ago, when he implied that the enfranchisement of women was bad for democracy. But Thiel’s interest here is perhaps a measure of the rising value investors are, at long last, beginning to place on women’s health startups — as the white-male-dominated VC class is, seemingly, starting to cotton on to the scale of the opportunity to sell stuff to half the world’s population.

Hugoboom says the seed investment from Thiel Capital came about after her husband (and her co-founder) got an intro to Peter Thiel through a mutual friend. “While I can’t speak for him I think the idea of creating a whole new category in women’s health was what intrigued [Thiel]. Like, why hasn’t anyone done this this way was the general feeling?”

“I think he’s a brilliant investor and he’s known for investing in people solving difficult problems so I’m excited to have him on board,” she adds.

Peter Thiel to leave Facebook board, which you probably forgot he was still on