The last time we spoke to Explo, the early-stage startup was announcing its $2.3 million seed round. That was back in November, 2020, a very different time, and a lot has happened since then for the Y Combinator Winter 20 alum.

In spite of launching a company at the height of the pandemic, Explo finished building the product and found its first customers. That product is a tool for building customized business intelligence dashboards with a look and feel of your own company, which you can embed in your website or email to customers.

As Explo co-founder and CEO Gary Lin told us at the time of the seed funding:

In terms of the UI and the output, we had to build out the ability for our end users to create dashboards, for them to embed the dashboards and for them to customize the styles on these dashboards, so that it looks and feels as though it was part of their own product.

Lin says one of the things they’ve learned along the way is that Explo is a sticky product, and that helped secure the latest $12 million Series A when the company went looking for funding at the beginning of this year. “Since we last chatted, we were heads-down building the product, selling the product, and around January of this year, we realized that we were actually getting some quite good traction and we thought it might be time to raise a Series A,” he said.

Lin says the venture market was starting to cool when they went looking for funding, but they got a good offer and feel very fortunate about that. “We didn’t actually see the same kind of impacts that founders today see. But it definitely wasn’t as hot of an environment as it was in December of the previous year. So I would say that we got very lucky in terms of timing, and we feel very fortunate about that,” he said. They secured the round in March of this year.

Today, the company is also announcing the official launch of their self-service product with a two-week trial period. The startup currently has 45 paying customers on the books with many others in the process of trying the product, he said. “For the free trials, what happens is that the companies will connect their databases or data warehouses to have the information that they want to be able to analyze. And so Explo will connect directly to these databases, whether it’s Postgres or data warehouses like Snowflake, and then give all of our customers a myriad of ways to kind of share data.” 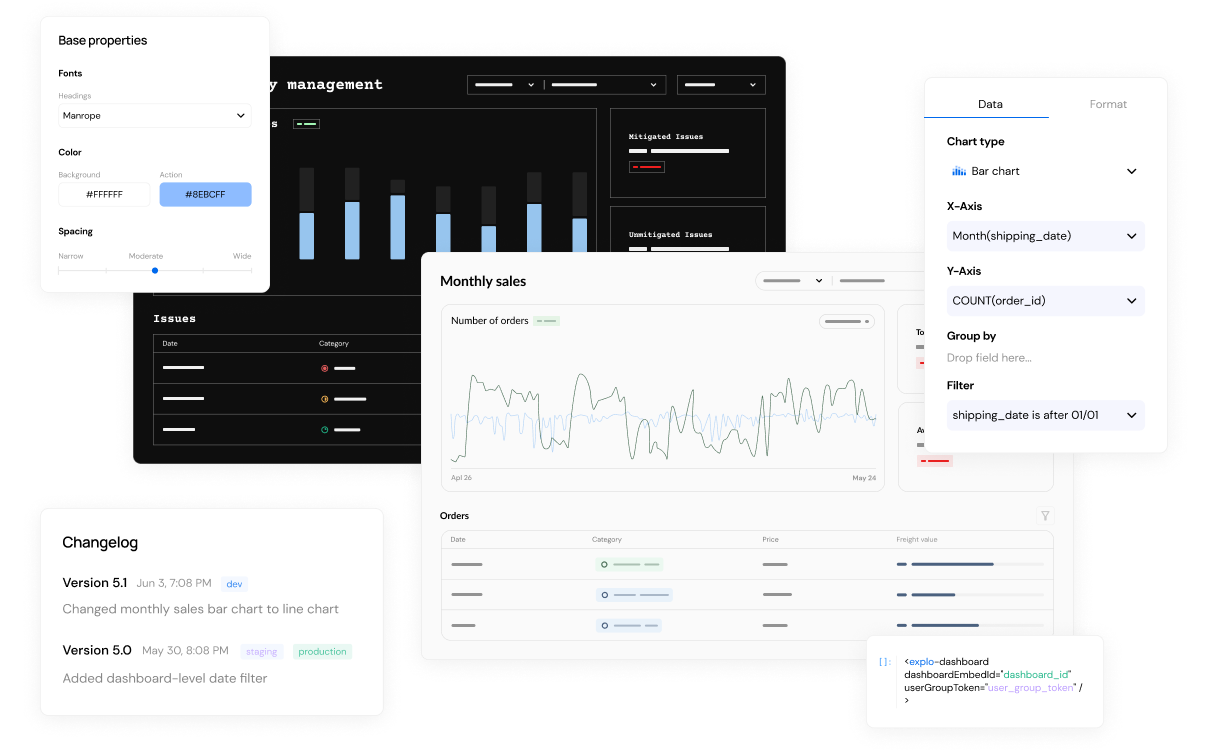 And in terms of the impact of the current economic situation, so far at least Explo hasn’t seen a slowdown. “The type of product and type of role that Explo fulfills for customers, is what we’re defining as a necessity, but not a core competency. And so as people are actually trying to make sure that their workforce…is focusing on what’s core to their business, they’re actually even more willing to outsource dashboarding and analytics to a tool like Explo. And so we’ve actually seen sales, not really go down but stay strong as we’ve seen before,” he said.

With 15 employees today, Lin says the plan is to double in the next year, but he will let performance be the guide for that, rather than some hard goal. He says the company is working with a recruiter to keep building a diverse team, and he says the key is finding candidates early in the process.

“We’re really proud of the team that we’ve built. And the team has remained extremely diverse, which we’re excited about. One of the biggest things that we’ve learned over time is that what actually helps the most when it comes to hiring for diverse candidates is the top of the funnel,” he said. That means using a variety of external sources from the beginning of the process to surface a slate of diverse candidates for each open rec.

Today’s $12 million Series A was led by Craft Ventures with participation from Felicis Ventures, Amplo VC and various industry angels.