Sharing a meme with someone you just met can be tricky, especially if you’re trying to flirt with them. Are they into wholesome puppy memes? Or maybe they like dark Homelander memes? Whatever the case may be, Schmooze, the meme-based dating app, is designed to match users with like-minded people who want to make each other laugh.

To use the app, a person swipes right to like, left to dislike, and up to love memes from a selection curated via artificial intelligence. Match suggestions will pop on the screen based on meme choices, and the person can select either “Snooze” or “Schmooze.” The algorithm takes into consideration what types of humor both you and the potential match enjoy or reject.

Today, Schmooze launched a new feature called “Schmooze Flirts” for users to share memes with their matches. “Schmooze Flirts” handpicks memes from the app’s algorithm that a match would likely laugh at and encourages a user to send meme to their match to spark a conversation. The user has 48 hours to message the other person or the chat will automatically disappear. The app also provides icebreakers to help you out before a match gets removed.

Users can now set a limit on the distance for the matches as well. 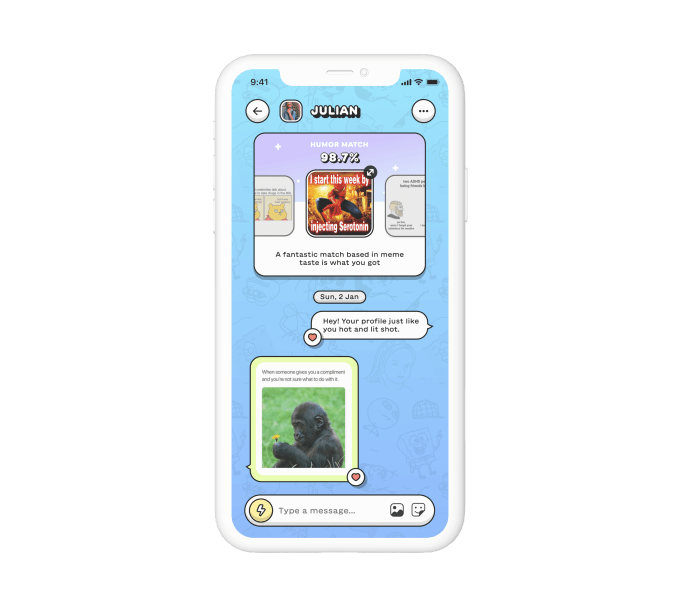 Additional features are coming to Schmooze next week, including meme pick-up lines and “Schmooze Ayooo,” a place on the app for people to post funny pictures from their own camera roll. Currently, the app doesn’t allow memes from users to enter its algorithm due to quality and appropriateness control concerns. Over the next two months, Schmooze plans to create a user-content platform and let users upload their own memes.

Schmooze is available on the App Store and Google Play Store, however, “Schmooze Flirts” and the upcoming features are only available for iOS users. There will be a delay of two to three weeks until the features are available on Android devices.

When setting up a profile, the user must answer what their “#MemeVibe” is by selecting options such as dark humor, puns, wholesome, relatable, NSFW, gaming, anime, among other topics and categories. They then add profile photos, a bio, their four favorite music artists, memes they like and their TV show binge list.

Note that while there are systems in place to catch fake profiles, extensive background checks aren’t done to eliminate people with a history of crime or violence. The target audience for Schmooze is Gen Z (17+), so users should always prioritize safety, especially when it comes to dating online.

Vidya Madhavan and Abhinav Anurag founded the startup and beta-tested the Schmooze app at Stanford University. In March 2021, Schmooze came out of beta. The dating app has grown to over 50,000 users with more than 15 million memes swiped and 750,000+ matches made.

A few months ago, the company raised $3.2 million in seed funding, led by Inventus Capital and Silicon Valley Quad, with participation from Lightspeed and Graph Ventures.