As millions of people are playing with AI-powered image-generation tools like DALL-E and Midjourney, new works of art are generated by the billions. Many of them are curiosities, some of them are legitimately incredible works of art that I wouldn’t hesitate to stick on my wall. In fact, I did; I have a Meural digital art display, and it’s currently playing a rotation of some of the most interesting works of art Midjourney has generated for me.

The picture above made me think, though; the prompt for it is “Lovers, in the style of Banksy,” which is remarkably close, stylistically, as a lot of other Banksy works — it even put the frame on it for me, unprompted. With a small amount of manual retouching (or with a lot more experimentation), I am confident I could get Midjourney to generate a work that anybody would recognize as “a Banksy.”

The challenge becomes complex, and I’m going to be keeping a very close eye on the legal universe to see how this is going to evolve over time. There are a few obvious issues here, and a few less obvious ones, but a few of the curiosities I have right out of the gate are related to copyright and plagiarism.

Are we all just monkeys pressing shutter buttons?

If you are using a free or a trial account for Midjourney, you are granted a Commons Noncommercial 4.0 Attribution International License, which means that you’d be able to use the images as long as you don’t sell them or make money off them, and as long as you give credit (“attribution”) to Midjourney. If you pay for your account, the company says “You basically own all Assets you create using Midjourney’s image generation and chat services.”

In its terms of service, the company further specifies that you grant Midjourney a “perpetual, worldwide, non-exclusive, sublicensable no-charge, royalty-free, irrevocable copyright license to reproduce, prepare Derivative Works of, publicly display, publicly perform, sublicense, and distribute text, and image prompts you input into the Services, or Assets produced by the service at your direction.” In other words, even if you “create” a new piece of art, and you have all rights to use the images the service creates, Midjourney also keeps its own license to use your works, including sublicensing.

The other quirk is that “Midjourney is an open community that allows others to use and remix your images and prompts whenever they are posted in a public setting.” Which means that even if you spend a bunch of time creating very finely tuned prompts of what you created, another user can use your image as the base for their own experimentation, and in theory create derivative works that are extremely similar to “yours.”

Now, imagine a world where you generate some really cool art. You develop a unique style that “only you” are able to create using Midjourney’s tools, and you decide to sell them, whether as NFTs, prints or what have you. Because of the license agreement you have with Midjourney, the company could start selling or licensing “your” artworks. It probably won’t; that would be pretty bad business. But another user could further evolve “your” style and images and start selling their own artworks based on those.

There’s another edge case as well; in theory, with the same prompts and the random seed that’s used for generating the images, you could end up with someone else generating the same, or a very similar, image as what you created. They could start selling that image, and we end up with a really curious situation where two people genuinely created an image that they thought was their own original but accidentally end up with extremely visually similar graphics.

Then there’s the issue of plagiarism. At the top of this article, I “created” something that’s recognizable as a “Banksy.” That artist in particular is interesting because his identity is unknown, and he is a fervent anti-capitalist, which means he’s relatively unlikely to (a) come out of hiding and (b) sue me for “creating a Banksy.” Besides, there are a lot more fake Banksys out there that were created with stencils and spray paint that would be more sensible to go after. The point remains, however; there are a fair few contemporary artists out there with very distinctive styles, and over time, the AI will learn to emulate many of them. These styles are not copyrighted, but they could very well be trademarked in one way or another. And even if it wouldn’t be “illegal” to plagiarize the style of another artist, I can totally see how an artist with a distinctive style would be miffed if some nerd such as myself suddenly started selling NFTs in their style.

One example; I challenged Midjourney to create “a colorful graffiti mural of Batman and Robin in Beautiful, Downtown, Oakland, California,” and ended up with this. Now I’m not familiar enough with individual graffiti styles to recognize this as the potential work of a specific artist, but it’s not unthinkable that I’ve accidentally plagiarized someone with that prompt.

A new Batman rises: A colorful graffiti mural of Batman and Robin in beautiful 856 #MidJourney pic.twitter.com/pjyKRvN28K

It becomes a question of who created a certain work of art. A few years ago there was a curious case of a monkey taking selfies with a photographer’s camera. Personally — and even if it is hard for the monkey to represent itself in court to defend its rights — I think that a monkey pressing the shutter button and having creative input into the way the image looks deserves its own copyright. The courts went the other way after a long and drawn-out process.

It leaves me to wonder; are we all just monkeys pressing shutter buttons, or do we “own” the copyright due to the amount of our own creativity we add to the process, even in a situation where very few of us — including Midjourney itself — are able to explain the exact process of how a particular image came to be generated. 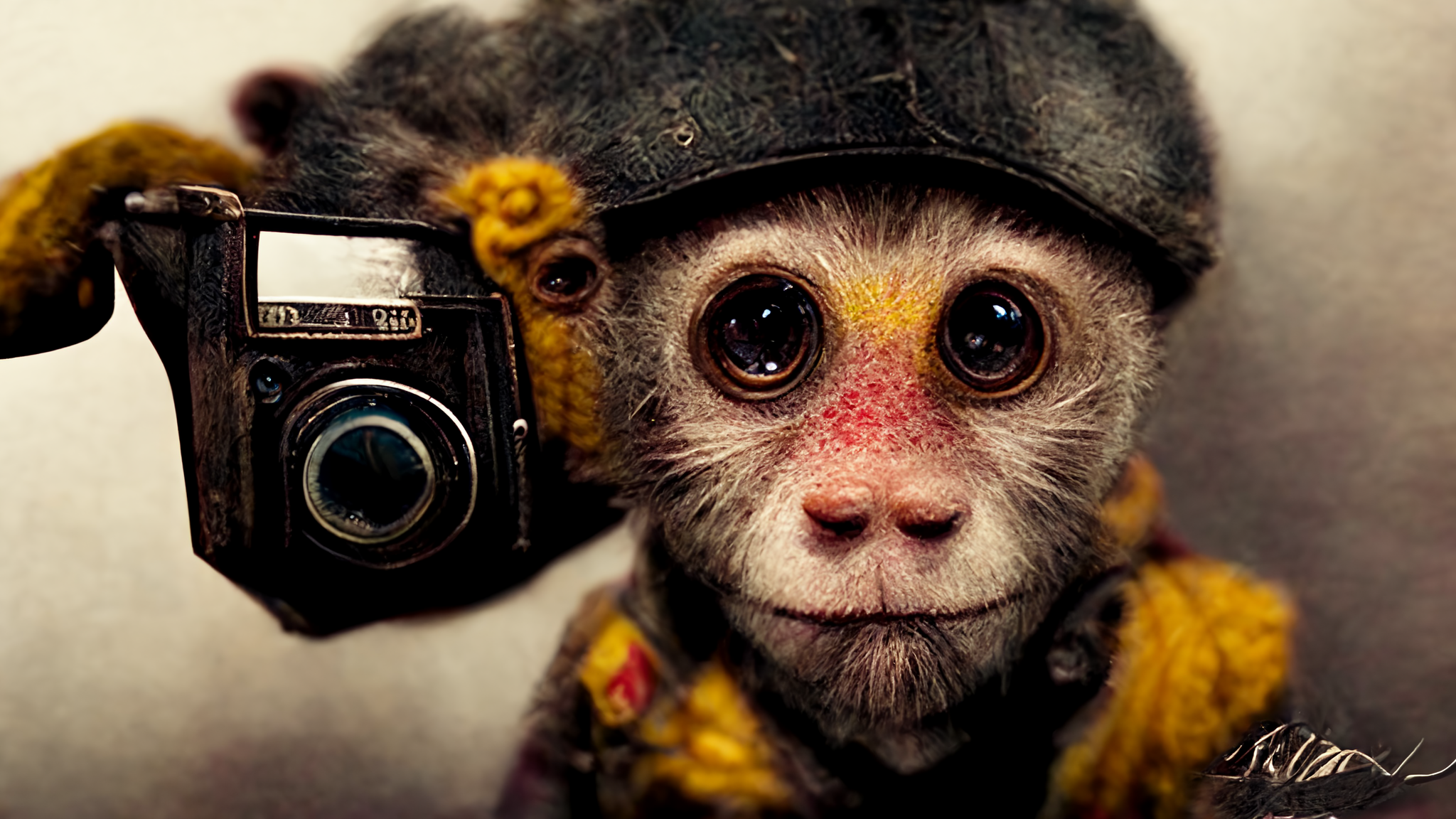