Binance, the world’s largest crypto exchange by trading volume, said on Friday it doesn’t own India-based platform WazirX despite disclosing the acquisition two and a half years ago in a move that has baffled industry players, including the Indian firm that insists the purchase did take place.

Changpeng Zhao, founder and chief executive of Binance, said in a series of tweets that the company has been “trying to conclude the deal for the past few years,” but hasn’t completed the transaction yet citing “a few issues” that he declined to elaborate.

Binance announced the acquisition of WazirX in late 2019 in a blog post. The official blog post, which carried a picture of Zhao and WazirX founders, also featured the Binance executive’s enthusiasm about the deal.

“The acquisition of WazirX shows our commitment and dedication to the Indian people and strengthen the blockchain ecosystem in India as well as another step forward in achieving the freedom of money,” the 2019 post cited him as saying.

WazirX also reported that it had been “successfully acquired by Binance” in a separate blog post. 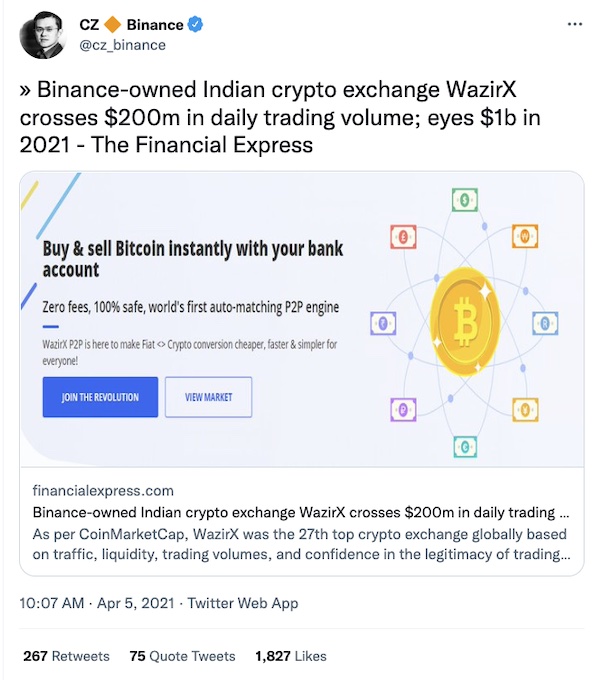 A tweet from Zhao last year sharing a news item about WazirX, where it is described as owned by Binance.

Zhao said Friday that Binance does not “own any equity in Zanmai Labs,” the entity operating WazirX and established by the original founders.

“On 21 Nov 2019, Binance published a blog post that it had ‘acquired’ WazirX. This transaction was never completed. Binance has never – at any point – owned any shares of Zanmai Labs, the entity operating WazirX,” he wrote.

“Binance only provides wallet services for WazirX as a tech solution. There is also integration using off-chain tx, to save on network fees. WazirX is responsible all other aspects of the WazirX exchange, including user sign-up, KYC, trading and initiating withdrawals,” he added.

“Recent allegations about the operation of WazirX and how the platform is managed by Zanmai Labs are of deep concern to Binance. Binance collaborates with law enforcement agencies all around the world. We would be happy to work with ED in any way possible,” Zhao added.

WazirX is the largest crypto exchange in India by trading volume. Its yearly trading volume exceeded $43 billion in 2021, a “1,735% growth from 2020,” the company said late last year. The platform also provides its technology to several other Indian exchanges.

The public dispute over the ownership took further stranger turn on Saturday. In a tweet, Zhao said Binance asked WazirX to transfer system source code, deployment and operations as recently as February this year, a request he alleges WazirX refused. “Binance do not have control on their systems. WazirX has been uncooperative with us, and looks like uncooperative with ED as well,” he added.

Shetty has also since doubled down on his claim that Binance owns WazirX, an assertion that Zhao has labelled as “deception.”

After some media reports on Binance structure, we asked about it

It’s been many months, still waiting for Binance Parent entity

People playing deception wording games. We can shut down the domain. It just hurts users. We do NOT have control of the trading system. You just gave the AWS login, no source code, no deployment capability. You also retained access to the AWS account, source code, deploy, etc. https://t.co/Zpp6MYlHtp

The story has been updated throughly to include additional details.