A popular anonymous social app that was misleading its users with fake messages has been forced to change. The top-ranked app NGL, which became the No. 1 app on the U.S. App Store in June, quietly rolled out an update yesterday that sees it now informing users when they receive messages that aren’t from their friends — as users had been previously led to believe. Before, NGL sent these fake messages as a means of creating engagement, then charged for “hints” about the message’s sender.

The app has also now lowered its subscription pricing, which promises to reveal details about who is behind the anonymous messages.

NGL is one of a handful of anonymous social apps that had recently shifted their attention to Instagram after Snapchat cracked down on apps of this nature using its developer tools, as part of Snap’s broader efforts to reduce harm to minors.

To use NGL, users would tap a button in the app to copy a unique URL they could share with friends and followers across the web. 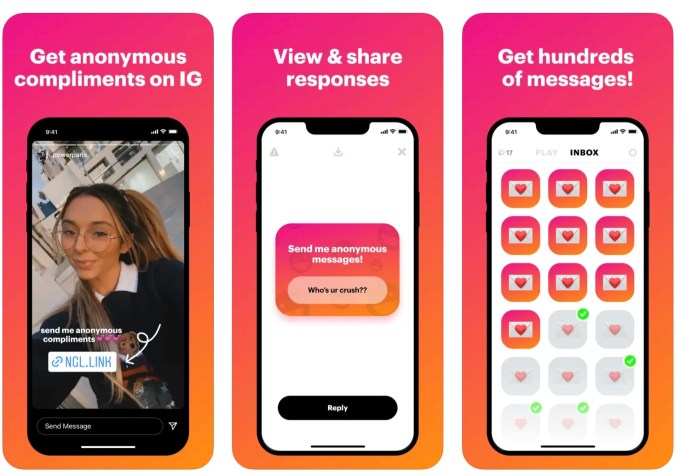 While Snap could prevent direct integrations with its own developer tools, NGL users could still copy and paste the special link into their Snapchat Stories or wherever they chose — like Twitter or any other app. However, a “Share” button in the app made it easy to post directly to Instagram Stories. Then, when others saw the link on their friend’s Story or post, they could click it to anonymously ask that person a question. These questions would appear as messages in NGL’s in-app “Inbox” for users to read and respond to.

However, NGL had a trick up its sleeves. If users didn’t get any engagement on their shared link, the app itself would generate messages automatically. Users had no real way of knowing that these messages were actually fake questions the app was sending them. But many suspected that was the case as the questions sounded like things their friends wouldn’t ask. (We confirmed the messages were fake by generating an NGL link but not sharing it. We then received messages).

NGL’s app reviews have been filled with complaints that its questions seemed to be coming from bots. What’s worse, the app developer was charging users for “hints” to learn more about who was asking the question. This means users were paying, in some cases, for hints about bots!  This could be considered fraud. (We’d advise impacted users to request refunds from Apple.)

The NGL app got its ideas from rival Sendit, a similar social app that also offers a variety of Snapchat games. In fact, Sendit’s maker is now suing NGL for stealing its ideas — the NGL developer previously worked on Sendit before realizing the potential in simply cloning the idea and raking in the money himself. As it turns out, there is some business to be had here. By July, NGL had topped 15 million downloads and had pulled in  $2.4 million in revenue by selling its subscriptions.

TechCrunch had called out NGL for its misleading tactics and, apparently, someone was listening. (Actually, we do understand there was a discussion between the developer and Apple about this). NGL has not commented.

Yesterday, NGL issued an update that now sees it labeling its fake messages with a tag that reads “sent with ❤️ from the NGL team.” This is meant to indicate the message is not from a friend but from the app itself. (Arguably, the wording could be clearer. Some users — particularly among its target market of young adults —  could interpret this tag to mean the message is simply being delivered by the app.)

These messages also don’t show a subscription prompt. In addition, the subscription cost was lowered a bit, from $9.99/week to $6.99/week and now includes other features beyond “hints.” For instance, it touts users will get “early access” to exclusive games besides the anonymous Q&A. One of the paid games is already included — an anonymous confessions game.

The app’s rival Sendit’s Q&A feature had worked in much of the same way and it, too, just updated its subscription. Now, instead of just charging for hints, Sendit “Diamond members” can reveal the name and Bitmoji of the sender (in some cases), access exclusive games, unlock a custom icon and remove ads from the experience, the app claims. However, its pricing still remains $9.99 per week.

Though the viral buzz around these apps has since died down a bit, they still remain highly ranked. NGL is the No. 9 app on the U.S. App Store’s Lifestyle charts and Sendit is No. 12 among Social Networking apps.