Instagram may be worried about TikTok’s threat to its business, but in the near-term, it’s still far ahead when it comes to the influencer marketing dollars spent on its platform in the U.S. According to a new analyst report, Instagram is on track to capture nearly 3x the amount of influencer marketing spend compared to TikTok in 2022 — or $2.23 billion spent on Instagram compared with the $774.8 million spent on TikTok.

However, while Instagram is faring well against TikTok on this front, Meta’s other app, Facebook, is not as lucky.

The new data, which hails from analysts at Insider Intelligence (previously eMarketer), indicates that TikTok is now on track to overtake Facebook in terms of influencer marketing spend this year and will overtake the No. 2 platform, YouTube, by 2024.

Currently, YouTube is seeing $948.0 million in influencer marketing dollars spent on its platform in the U.S., ahead of Facebook’s $739.0 million. In addition, TikTok has already overtaken YouTube based on marketer usage for influencer-based marketing, the report notes. 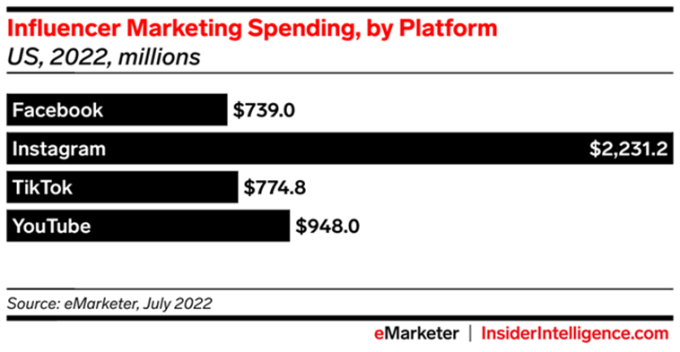 Instagram has been steadily adjusting its algorithm and feed to highlight creator content, recommended posts and advertising, despite complaints from users who want to see more of their friends’ photos and videos. But as Instagram tweaks how content is ranked in its main feed, some creators have worried their reach could be negatively impacted by the constant changes.

Last week, Instagram agreed to roll back some recent updates, which saw the app morphing itself into TikTok with a full-screen home feed and increased number of recommended posts, after two of the Kardashians posted a complaint to their Instagram profiles. Of course, mega influencer celebs like the Kardashians could lose out if Instagram shifts its algorithm to feature a greater number of smaller creators.

The report also points out that could be the eventual plan for Instagram, adding that the mix of influencers benefiting from this form of monetization has been shifting over time.

The report notes, too, that marketing spend on smaller influencer partnerships has been growing quickly. This year, “nano” influencer spending will rise 220.5%, the analysts predict, while spending on “mega” influencers will grow only 8.0%. (Mega influencers have at least 1 million followers, as the firm defines it.) 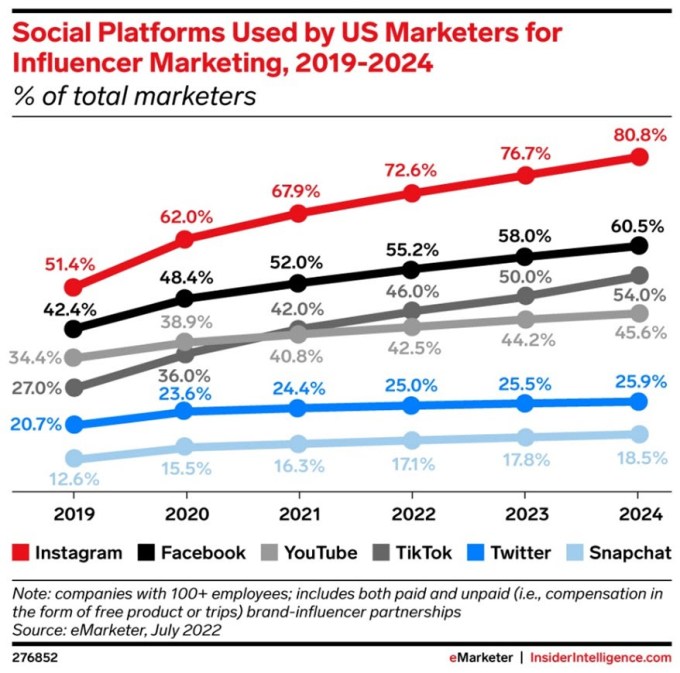 Marketers may also prefer working with smaller creators for a variety of reasons, including the fact that their rates are cheaper but their posts may have higher engagement rates.

They may be less likely to have their view counts elevated artificially through the use of fake views or bots, as well.

For what it’s worth, TikTok is often accused of having inflated view counts and is known to have lower limits for what qualifies as a view for marketers’ purposes. It’s said to count a view as soon as the video plays and counts rewatches as views. (Plus, some believe there are questions as to how much TikTok itself could be complicit in inflating views, given its owner ByteDance directly involved itself with making fake accounts in a prior app that was a sort of TikTok precursor.)

But this data doesn’t rely on view metrics, the firm told us. The forecast instead looks at spending on influencer partnerships by brand, including payments made to influencers or their reps, excluding non-cash payments (like free products or travel) as well as paid media.

“TikTok is surging in popularity for influencer marketing, but it’s still nowhere near Instagram in terms of spending or marketer adoption,” Insider Intelligence principal analyst Jasmine Enberg said. “That’s in part due to the higher prices Instagram creators charge for content, but also because of its wide array of content formats, most of which are now shoppable. Still, Instagram is trying to be more like TikTok so that it can attract smaller creators, which TikTok is known for. That’s key for Instagram to retain its lead in the influencer marketing space, especially as many creators on TikTok now boast follower counts that rival or surpass those on Instagram and YouTube.”