As of 2020, the clothing sector lost about $27 billion in annual sales due to counterfeits, an illicit trade that results in huge losses to both brands and buyers. Clothes, accessories and luxury goods are the most popular product items for counterfeiting, according to the 2022 intellectual property crime threat assessment report. But that’s not where the problem starts and ends: the explosion of digital content has also led to a wide number of digital counterfeiters as well. 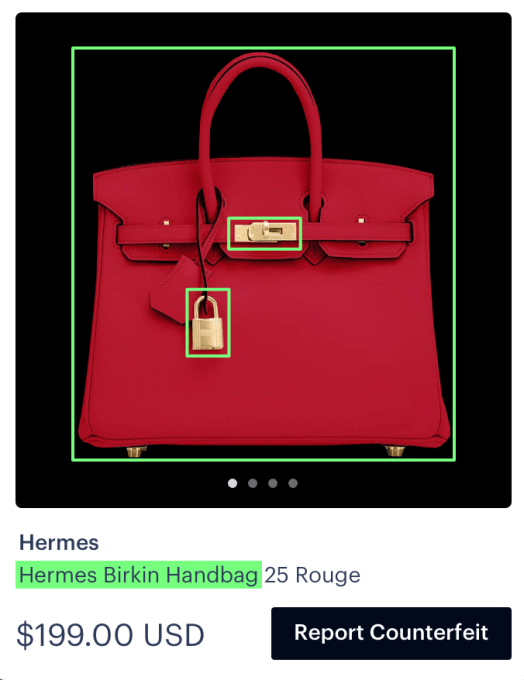 Image Credits: MarqVision (opens in a new window) under a license.

MarqVision has built an AI-powered intellectual property (IP) protection platform that monitors both e-commerce marketplaces and digital content, automatically detecting counterfeits and removing them from online sales and distribution. And now, the startup has raised $20 million in Series A funding to continue expanding its platform.

The company, based in Los Angeles and originally incubated at Y Combinator, says its customers — which include fashion labels like Ralph Lauren and Kangol, LVMH, crystal icon Baccarat, as well as media behemoth Pokemon — use MarqVision to scan places where their brands are most likely to be misappropriated.

These include the top 1,500 online marketplaces globally, as well as popular social media platforms that are becoming increasingly used for commerce, NFT platforms, gaming sites and other places where counterfeit products might appear. It says that its tech is already leading to more than 20,000 enforcements weekly. Its founding team has roots in Asia — specifically Seoul — and it claims to have the most extensive IP enforcement platform in the region, an important point given that some 90% of counterfeit sales globally are traced back to Asia.

DST Global Partners and Atinum Investment led the latest funding along with its existing backers SoftBank Ventures, Bass Investment and Y Combinator. The Series A funding brings its total raised to $25 million, including a seed round of $5 million in 2021. The company is not disclosing its valuation.

The challenge that MarqVision is tackling is the speed and scale of counterfeit sales.

Millions of counterfeits are traded in real-time, and the opportunity, so to speak, is wide: it impacts both small and large brands and selling platforms. Companies like Amazon have developed extensive IP protection strategies over the years to proactively track and take down fake goods, but the argument here is that even this is not enough (and that’s saying nothing of the thousands of platforms smaller than Amazon that lack the resources to manage this on their own).

In other words, as with any digital challenge, the problem with fake goods — be it products or content — is one of outsized scale, one that is hard, if not impossible, for humans alone to tackle.

Mark Lee, together with the startup’s CBO DK Lee and with other friends from Harvard and MIT, founded MarqVision in 2020. (Mark) Lee approached the problem initially from a legal perspective when he was still a Harvard law student. Interested in the field of IP, he realized that counterfeiting was the largest criminal enterprise in the world, with $3 trillion of products being transacted annually. Newer digital innovations such as the growth of e-commerce marketplaces — which gives third party sellers routes to reaching a lot of new customers quickly — and new routes for disseminating content, such as apps marketplaces, have all accelerated the practice.

MarqVision uses artificial intelligence and machine learning technology its founders first worked on at MIT: its approach is to automate both the scanning and reporting of illicit usage. Those uses that are harder to definitely detect are in turn triaged by humans, but that’s not the case for all of the items MarqVision scans. About half of all reports the company files to online marketplaces, for example, are automatically drafted using AI and software do not need to go through a human inspection, co-founder and CEO Mark Lee told TechCrunch. He claims that the technology has 97% accuracy, which means for every 100 items it reports, the company can take down 97 of them.

“Creative assets are under assault in today’s digital world, with content owners left largely unprotected as consumers get hoodwinked into buying fake goods and NFTs by sophisticated counterfeiters,” said Lee. “Unlike our competitors, which are forced to review manually in time-consuming processes, MarqVision’s process end-to-end is mostly automated.”

This is something that other companies in the industry have been unable to accomplish, Lee argues. “Other brand protection companies hire thousands of employees (or what they call analysts) to manually search and report counterfeits online,” he noted. “Traditionally, the most time-consuming part of the entire process is product-matching and documentation.”

The product matching, he continued, “is an extremely laborious process if done manually.”

Documentation and reporting, meanwhile, represent another kind of problem, almost one of robotic process automation.

In essence, when a product is identified as fake, it needs to be reported to a marketplace. Each marketplace, Lee said, “requires a different set of documents, proofs and reporting templates to state the reasons for reporting.” MarqVision has automated all of this. “Traditionally, it took about an hour to draft a full report when reporting a single product listing,” he said. “Now, we can process thousands of reports every hour.”

It’s important to note that a lot of the IP tech that is being built by third parties today is mainly used at the moment by rights holders themselves, as it is for MarqVision, too. To that end, the funding here is essentially going to be used to further that particular business funnel. MarqVision plans to use the proceeds to develop a new and comprehensive IP operating system that allows brand owners to manage, protect and monetize intellectual properties, all in one place, Lee said.

That’s not to say that platform operators have not been making efforts, too.

Amazon, as one example, has spent years building up a strategy to tackle IP theft, working with authorities both to identify and then prosecute bad actors. But it’s been a tricky problem for marketplaces more generally. On one hand, their priority as a business is to enable as many transactions as possible, which in the past has led to accusations that it was in their interest to be weak on counterfeit prevention (it means less sales!). On the other hand, this is a bad look, is illegal, and no commerce site wants to have a reputation of being untrustworthy either to buyers or  sellers, so it’s definitely in platforms’ interests to tackle this.

Critics, however, believe that the horse has bolted due to a failure to control IP theft early on — hence the opportunity to build technology that brands can adopt and use to defend themselves more directly.

There is another issue, as Lee sees it, that will keep marketplaces from being able to build or provide the kind of tools that it (or its direct competitors like Red Points and Brandshield, among many others) provide:

“Most marketplaces want to strictly maintain their position as an intermediary, a mere connecter between the buyer and seller,” Lee believes. “They do not want to take direct responsibility for whatever is being sold on their marketplaces, or else they’ll face many liability claims. Therefore, most marketplaces take the stance that they are willing to address the counterfeit issues to the extent that they’ll examine and take down any reported items. Even if they want to proactively monitor and takedown counterfeits, there are millions of product being listed and sold every day, so it’s not an efficient use of their resources to run an anti-counterfeiting program on a broad scale.” In contrast, he said, “MarqVision focuses on a set number of brands that are highly interested in protecting their brands and safety of their customers, so we can be much more accurate and efficient.”

MarqVision will also be using some of the funding to opening a new operation in Paris this fall, which will be the startup’s European base. Paris is a great place to start because many of its current clients are European luxury brands, Lee told TechCrunch. MarqVision won the LVMH Innovation Award in June 2022 and is participating in the LVMH’s accelerator program, La Maison des Startups.

“No one else is doing anything remotely this advanced, and it’s possible in large part due to Mark’s background not only as a respected technologist and startup founder, but as a legal expert with a specialization in trademark, copyright, and patent laws,” said Cheuk Kim, managing director at Atinum Investment. “He understands the holes counterfeiters exploit and is developing a new way forward.”